The Royal British Legion was founded in 1921 in the wake of the First World War to provide support to current and past members of the British armed forces and their families. Its best-known fundraising campaign comes in the lead-up to Remembrance Day in November, when the organisation sells poppies and holds the Festival of Remembrance. This month’s Brand Watch looks at how the public has viewed the charity since the start of October 2012, taking in both the 2012 and 2013 Poppy Appeals.

Looking at the charity’s Buzz score between October 2012 and the end of November 2013, a couple of things are clear. The first is that, while the charity’s score – which measures whether people have heard good or bad things about the organisations in the media in the previous two weeks – is always positive, it has substantial peaks in late October/early November in both years.

The second is that the 2012 peak is noticeably higher than the 2013 one. We use a three-week rolling average on this data, meaning the full impact of an event can sometimes show up in the data a little while afterwards. The figures show that in 2012, the peak Buzz score was +27.1 on 23 November, while in 2013 the crest came on 26 November, when it hit +20.5. This is a full seven points lower than the previous year. The score measures whether people have seen advertising from a charity in the previous two weeks and is a clear indicator of whether an organisation is undertaking a concerted media campaign and whether consumers are paying attention. The average score between May and October was +2.1. However, when the Royal British legion started its 2013 campaign the score increased five-fold (from +4.5 to +21.9) in the five weeks between 18 October and 22 November. 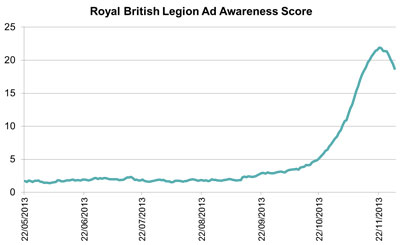 In recent years the charity has made a conscious decision to try to engage younger audiences, as illustrated by its decision to get the pop group The Saturdays to launch the 2013 Poppy Appeal. YouGov’s data shows that, in general, 18 to 34-year-olds are the group paying the least attention to the charity. The average attention score for 18 to 34-year-olds across the period is +6.1; this compares with +8.2 for 35-49 year olds and +13.2 for people aged 50 or over.

The research also finds that young people’s Attention Scores move least out of all of the age groups when it comes to the impact of the autumn campaign. The increase among 18 to 34-year-olds for the 2013 Remembrance Day activity was +10.1 (measured between 18 October and 25 November), compared with +10.8 among 35-49 year olds and +19.7 among over 50s. 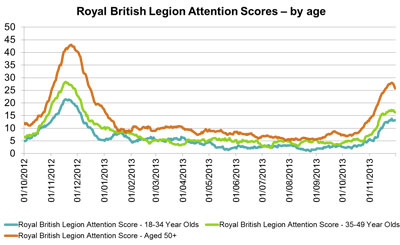 The challenges for the Royal British Legion come not only around engaging the younger generation in its work but also from other charities in the same area – most notably, Help for Heroes. The two work together on projects for veterans, but the younger organisation ranked higher than its older compatriot in this year’s Third Sector Charity Brand Index rankings.

As we have previously explored, Help for Heroes has a very strong year-round media presence, highlighting both the work it does and the ways people raise money for it. Looking at the Value scores – which measure people’s propensity to donate – for the two charities among over-50s, we see that year-round they are more likely to consider giving to Help for Heroes than the Royal British Legion, even during October and November. Indeed, Help for Heroes sees a spike in its Value score around Remembrance Day.

It should be noted that this does not necessarily mean that the Royal British Legion will receive fewer donations than Help for Heroes. It merely means that more people think about the latter charity when thinking of which good cause they would give money to. A lot of money raised for the Poppy Appeal comes from ad hoc collections, with one city worker donating £300 spontaneously this year. However, it does indicate that when it comes to military charities, more of the public think about opening their wallets to Help for Heroes. The Royal British Legion stages its major fundraising drive and awareness campaign around Remembrance Day. Given that the charity and the day were both established after the First World War to focus on the sacrifices of military personnel, the ties between the two are inevitable and strong. Given that many people refer to it as Poppy Day, it is clear that the charity has done a great job in cementing its major campaign in the minds of the public.

The charity does face challenges in the future, though. It might not be particularly surprising that the younger generation does not engage with it as readily as older people – especially given the ever-increasing length of time between the present day and the conflicts that inspired Remembrance Day’s creation. However, other military charities that were founded in the wake of more recent conflicts – such as Help for Heroes and Walking with the Wounded – are gaining traction with the public, even among the 50+ age group that are the most engaged of the Royal British Legion’s audiences.

With this in mind, this year’s 100th anniversary of the start of the First World War will provide a fitting platform to remind and educate the public in general, and younger people especially, about both the sacrifices made by others in past conflicts and the work that the Royal British Legion still does in supporting soldiers and veterans.

Robert Lee, the Royal British Legion's assistant director of marketing and communications says: "The younger generation will naturally engage more readily with service charities born of recent conflicts, and we have addressed this in recent years by conscious efforts to reach out to them and those who are presently serving in the armed forces, such as by working with popular artists like The Saturdays, John Bishop and Union J.

"We are keen to highlight our profile as the largest UK armed forces charity for the entire service community, benefiting all those who have ever served, or are currently serving, in the UK armed forces in conflicts past and present, and their families.

"Our own data shows a much steeper curve of awareness in late October and November, likely because we also include data related to the Poppy Appeal and not just the charity behind it.

"However, we will be using the Centenary period to gain new ground as we remind the British public that the Remembrance and support for our armed forces community is just as needed now as it was after the First World War, when the Legion was founded."