The Royal Society for the Protection of Birds is one of the larger charities in the country, with an income of £90.1m according to its most recent accounts. Although it was founded for the benefit of the avian population, more recently it has widened its focus towards protecting wildlife and nature more broadly.

As part of that repositioning, this summer the organisation launched its ‘Giving nature a home’ campaign that seeks to recast the RSPB as a charity that encourages the protection of all species and inspires the public to protect and nurture the nature on their doorstep.

The campaign was part of a wider rebranding of the charity. The organisation’s refocusing was driven by a large number of factors as outlined by its head of supporter insight, who saw the strategic positioning as serving a number of purposes. These included the possibility of growing the charity into the UK’s voice of nature and also to address perceived weaknesses in the charity – such as it having many supporters but very few advocates and the fact that its income growth was not keeping pace with its increasing operating costs. It also wanted to inspire greater engagement among younger people and parents – encouraging them to get out in the garden, making homes for nature together and sharing their activities on social media.

The campaign started in June with a TV advert that was broadcast throughout the summer. The ad starts with a picture of a bird looking across a city before taking the viewer on a journey into wider nature – much like the RSPB’s own move from being all about birds to being there for all wildlife – following a girl as she makes homes for wildlife in her garden. The advert was supported by PR, with news coverage from the likes of the Daily Telegraph and Guardian, in addition to a piece on the BBC website. The organisation also undertook a programme of experiential activities, including inviting children to ‘sleep in nature’s home’.

By looking at the Ad Awareness score on YouGov's CharityIndex, which measures whether people have seen a charity's advert in the past two weeks, we can see that the public took notice of the RSPB's spot.

Using a three week rolling average, the score grew from +3.3 on 21 June to +7.2 on 9 August. It then fell before rising once more when the advert aired again in the autumn. 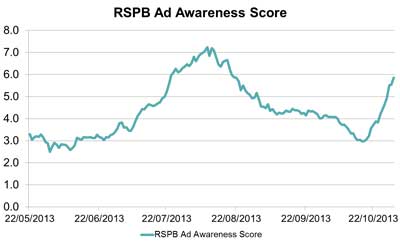 Curiously, men picked up on the advert at an earlier stage to women but women reached greater levels of awareness. Men’s Ad Awareness Scores grew from +1.8 on 21 June to their highest point of +3.8 on 31 July. This is compared to women, whose scores only really started to move on 19 July (when it was +1.7) and reached a peak of +5.0 on 20 August. 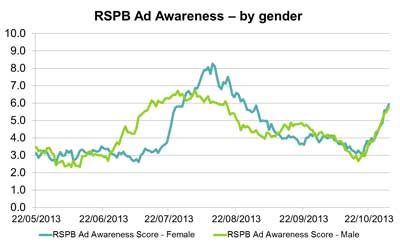 The advert appears not only to have been remembered by the public but also to have led to people discussing the charity. The RSPB's Word Of Mouth Exposure Score increased from +2.4 on 21 June to +4.2 on 9 August. There were increases among both the over-50s and the under-35s, with the younger group talking about the RSPB earlier (up from +0.8 on 5 July to +3.3 on 15 July) but older people being the most likely to have discussed the organisation (going from +2.7 on 19 July to +5.4 on 9 August). 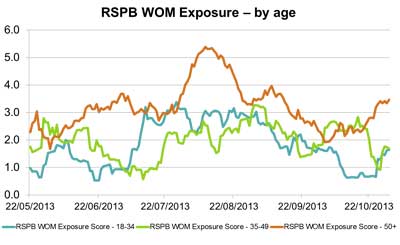 The data backs up research by the charity that suggested awareness was not spurring donations. Its Awareness Score is high, but its Value Score, which measures propensity to donate, hovers around zero. This means people know about the RSPB but are not donating.

When the TV campaign was running there was a slight improvement in its Value Score. There was a marked rise in the propensity of certain groups to donate, not least the 18 to 34-year-olds, whose Value Score rose from -7.2 on 6 July to +6.2 on 9 August. 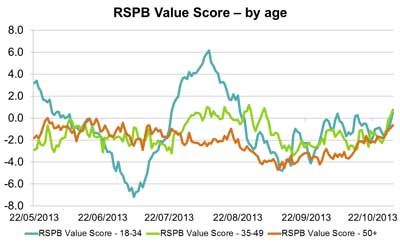 The campaign not only improved the RSPB's Value Scores among young people, but also the charity's overall brand health among this group. The charity’s Index Scores from younger people went from +11.0 on 30 June to +18.6 by 12 August, making it – briefly – the age group with the best image of the RSPB. 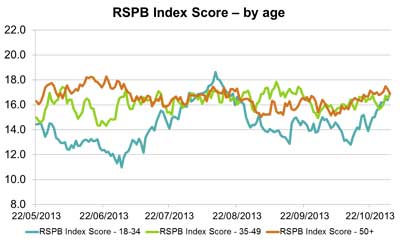 It will take a while to see how well the RSPB meets the long-term strategic objectives of its rebrand. After all, it takes time to turn people from supporters into advocates and also to re-cast an organisation from being one focused on protecting birds to nurturing all of the UK’s species and habitats. However, the initial response to this summer’s activity launching the ‘Giving nature a home’ campaign suggests it has hit the mark.

By creating an advert that makes an impact and – crucially from an advocacy point of view – spurs talkability, the RSPB has moved to the front of people’s minds, allowing it to then recast itself among a more engaged audience. Additionally, by stoking interest among younger people it has opened-up the organisation to a new audience. The charity’s next challenge will be to build on these gains and making sure that changing attitudes among the public leads to changing their behaviour, too.

Jonny Wright, the RSPB's head of brand, innovation and planning, says: "Nature in the UK is in trouble. Last spring, the RSPB joined forces with 24 other wildlife organisations to publish the State of Nature report, which showed that 60 per cent of the species assessed have declined in recent decades, and almost 10 per cent of these are under threat of disappearing altogether. The report received widespread coverage and people pricked up their ears. We needed to act on this momentum to show our determination to turn around the fortunes of our wildlife, and to make everyone realise they can play a vital role. Our campaign has shown that we can all help and the YouGov findings are a sign that the appetite to save nature is growing."