Last January we assessed how the public perceived the RSPCA in the wake of the Heythrop Hunt. Now, one year on the organisation is again the focus for Brand Watch. 2013 was a busy year for the charity and it seemed that barely a week went by when it didn’t feature in the news. This month’s analysis weighs up what impact some of the biggest stories have had on the organisation over the course of the last year.

The fall-out of the RSPCA’s prosecution of the Heythrop Hunt, the focus of last year’s article, was a saga that continued to run throughout the year for the charity, with critics continuing to suggest that it was a waste of donors’ money. Each turn was covered in the broadsheet media (as shown by the links below).

The initial fall-out from the case continued throughout February with news that the organisation raised a £160,000 fighting fund to cover the cost of prosecutions followed a few days later by reports that the charity "wasted tens of thousands of pounds" on failed court cases. Following the publicity around the RSPCA’s prosecutions policy, the Telegraph reported that the Attorney General suggested the charity should hire a criminal barrister to review its approach.

In June, judicial authorities "slapped down" the judge in the case for expressing personal opinions in court for saying the charity’s resources could have been more "usefully deployed". Additionally, echoing the earlier story, the organisation was accused of using the court cases brought by the charity as a means to raise funds. The pressure on the charity over its prosecutions continued throughout the year and in December it announced that it had hired a former CPS lawyer to review its prosecutions policy. At the end of the year, the Countryside Alliance released figures suggesting that four in five RSPCA hunt prosecutions in 2013 failed.

In April the Charity Commission announced it was investigating the RSPCA to see if it strayed too close to politics over its activities surrounding the badger cull. Ultimately, the commission cleared the organisation of going beyond its remit, but the charity had to give assurances it would not ‘name and shame’ farmers involved in the cull. However, reports emerged in September that the RSPCA still had a "case open," despite the charity’s assurances it had been given a "clean bill of health" over its campaigns. The issues surrounding its anti-badger cull campaign were still being felt in December when the organisation’s advert suggesting animals in cull areas would be "exterminated" was banned by the Advertising Standards Agency. The news was widely reported on outlets such as the BBC, the Daily Telegraph and ITV.

As well as criticisms over the nature and cost of its campaigns, the RSPCA also was the focus of a number of other unflattering news stories during 2013. In May, Dawn Aubrey-Ward, one of the charity’s former inspectors who had previously claimed the organisation destroys 'healthy' animals, hanged herself, with the RSPCA being accused of "publicly attacking her character and integrity" in the lead-up to her death. The story of the tragic "whistleblower" was widely covered, with stories in the Daily Mail, Daily Mirror, The Sun, The Times and Daily Telegraph.

In August, it was widely reported that the Archbishop of Canterbury declined the charity’s offer to become a patron, despite the previous three archbishops holding honorary positions within the organisation. Furthermore, celebrity chef Clarissa Dickson-Wright urged people to stop donating to the charity. Both stories again served up more negative coverage for the organisation.

The summer months also brought internal aspects of the charity to the fore. In July, the Daily Mail reported that the charity’s Chief Executive was being paid £160,000 at a time when donations were falling. Two months later, the Daily Telegraph reported on a leaked internal memo from the charity’s deputy chairman suggesting the RSPCA feared an exodus of ‘disillusioned staff.’  He also expressed the view that the RSPCA was being attacked in a "campaign" of vilification.

However, as well as these negative narratives, the organisation also received some very positive coverage for what it is most famous for – animal rescue and protection. In late January and early February, the charity rescued birds affected in an oil spill in the English Channel, the rescue of the animals being covered by the likes of ITV and The Guardian, among others. In April, the RSPCA’s work in combating cruelty was well publicised when it released its figures for the number of convictions it secured against people harming animals. The figures received pick-up in news outlets as diverse as the BBC, the Daily Express and even the Daily Mail.

Owing to the frequency of the stories about the organisation outlined above – often in the form of over-lapping on-going stories – this analysis of the RSPCA over the last year will largely be over-arching rather than event-specific. Looking at the RSPCA’s Buzz score, which measures how many people have heard or seen anything about the charity in the previous two weeks, and whether it was positive or negative, it is clear that, despite some bright spots, it has been a bruising year for them.

In December last year – before the Heythrop prosecution – its score was around +7.5 and ended 2013 on -0.7, with frequent recoveries and declines in between. The biggest positive peak came in late April when the animal cruelty figures were released, when the organisation regained much of the ground lost in the previous months, before a further decline that lasted until September as the various negative narratives played out over the summer.

It is interesting to note how closely its Value scores – that measure propensity to donate – mirror its Buzz scores. One of the central criticisms of the charity from certain sections of the media is that it "wastes" money given to it on "political" activities, and it is clear that the downturns on Buzz scores are matched by a decrease in people’s propensity to donate. Conversely, when stories such as the oil spill and animal cruelty figures are released, Value scores go up as the public are reminded of the many ways their money is spent. 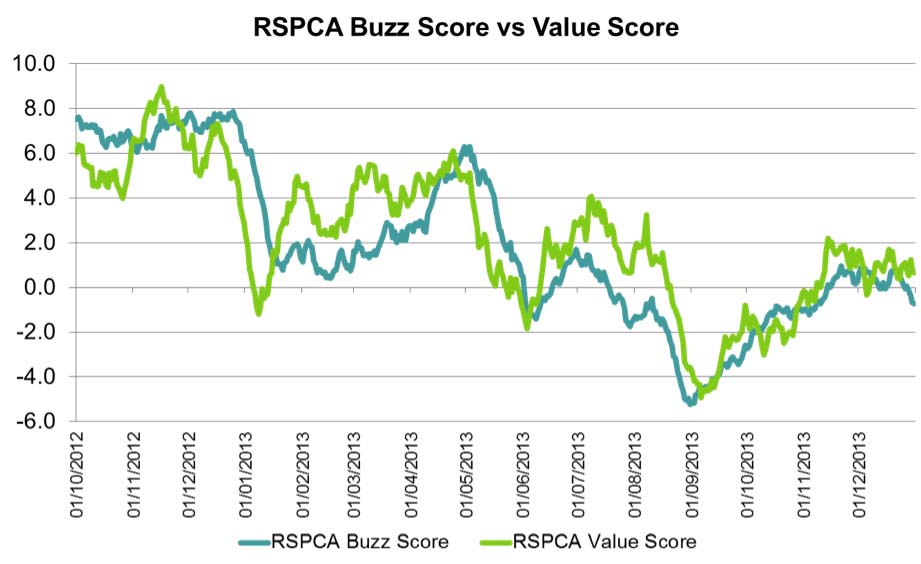 RSPCA Buzz and Value scores, 1 October 2012 - 31 As is clear from the above summary of the RSPCA in the media over the last year, a lot of the coverage of the charity came from the bastions of middle England – the Daily Mail and the Daily Telegraph. Given this, it is perhaps unsurprising that the charity has fared badly among higher earners.

Before Heythrop, high and low income groups had broadly similar Buzz scores. While both have declined in the past year, it is the high income group that hits lower depths whenever the charity suffers a hit. The fall among high income groups which began in December 2012 with Heythrop did not stop until the initial round of stories about the hunt (and associated issues) abated in February 2013. As further negative stories about the charity were published throughout the spring and summer, the cumulative effect saw the charity’s Buzz score among both high and low income groups decline until they bottomed out in September. A particular bright spot, however, was the animal cruelty story in late April, which had particular resonance among low income respondents. 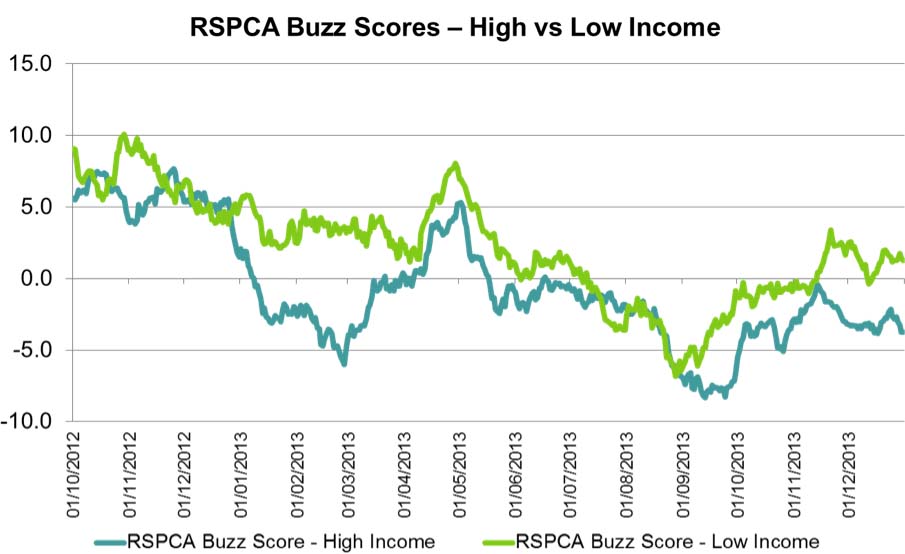 Assessing the Impression scores – which measure whether the charity supports a cause people believe in – It is clear that older audiences are the ones most likely to have moved away from the RSPCA during its troubles.

This could be tied to their generally less favourable views towards the charity (as shown by the Index scores measuring overall brand health which show older people consistently and markedly lower than younger). On the other hand, it could also be tied to the coverage of the RSPCA in the media that many of this cohort absorb – most notably the Daily Mail and Daily Telegraph.

However, which way round any possible influence runs is unclear. It could also be that younger people are attracted by the organisation’s more campaigning style and that older people’s scores suffer by comparison. 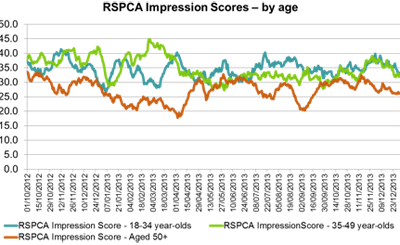 It has been a difficult year for the RSPCA and this is reflected by the fact that its scores have declined across most measures in the CharityIndex since the Heythrop story broke in December 2012. Whether or not the organisation’s more campaigning approach is having an impact is up for debate. However, what is undeniable is that the media coverage that debate is receiving is having a very real impact on how the public see it.

The sheer number of stories that have been written about the organisation in parts of the media over the past year that questioned its modus operandi made it almost inevitable that certain groups would have a more negative opinion of the charity. Older people and those earning more money were increasingly inclined to have a worse impression, hear bad things about it and be less likely to donate money to the organisation at the end of 2013 than they were twelve months previously.

It remains to be seen whether 2014 will bring the RSPCA any respite. However, given the general improvement in its scores in the last three months of the year and the fact that the public responds positively to the organisation when it showcases its day-to-day on-the-ground work suggests a resilience that will serve it in good stead going forwards.

John Grounds, director of marketing and campaigns, says: "Over the past year, the RSPCA has been doing what we were set up to do almost 200 years ago – preventing cruelty, prosecuting those who harm animals and rescuing animals in need. We have done this with enormous public support, despite attacks in a small minority of newspapers, seemingly prompted by those seeking to discredit the charity, particularly those wanting to bring back blood sports.

"The YouGov report is one of a number covering the sector. The recent Harris Charity Brand Index (promoted by Third Sector) shows an increase over the year in people's trust and consideration of support for the RSPCA. This is borne out by the recent NFP Synergy charity awareness monitor and indeed by our own figures, which show a growth in supporters over the past year.

"The vast majority of coverage has been overwhelmingly positive, with many thousands of stories covering our work rescuing seals or oiled birds, our cruelty statistics, RSPCA Week or our Everyday Heroes campaign, none of which are mentioned in the YouGov report.

"We continue to be the highest-ranking animal charity in the country in terms of positive media coverage and our support is stronger than ever from those who want to see an end to animal cruelty.

"One of the stories mentioned in the report is about the salary of the RSPCA's chief executive. His salary is not as high as quoted. It is under regular independent review and is within the going rate for major UK charities, both animal welfare and other."

Editor's note: The RSPCA declines to give an exact figure for its chief executive's salary. According to its latest accounts, the highest paid employee received between £150,000-£159,000. The RSPCA said this reflects restructuring costs during 2012 rather than current salaries.