YouGov's Gavin Ellison assesses the impact of the international aid charity's recent media activity, which has been driven by the civil war in Syria and Typhoon Haiyan in the Philippines.

The United Nations Children’s Fund gives long-term humanitarian and developmental support to children and mothers in developing countries. Established in 1946 in the wake of the Second World War, the organisation receives funding from both governments and individuals. This month’s Brand Watch looks at the charity over the past six months or so to see how the public engaged with it as it dealt with humanitarian disasters across the globe.

A lot of Unicef’s media activity since last June was driven by two situations: the civil war in Syria and Typhoon Haiyan in the Philippines. In June the organisation launched its largest ever appeal asking for $5bn in donations for its Syrian effort. In August, the organisation condemned the use of chemical weapons. The day before, the charity confirmed the millionth child refugee from the conflict. The organisation continued to report on the escalating humanitarian crisis at the start of the school year in the UK Unicef drew attention to the plight of schoolchildren in Syria.

In November a massive Typhoon hit the Philippines leaving thousands of families without food or shelter. Unicef launched an urgent appeal for funds highlighting how vulnerable children were in the aftermath of the disaster. As well as appealing for donations from members of the public the charity also received backing from received backing from the business community towards its fund. Unicef kept the relief effort in the public eye throughout December such as with these photos posted on the Guardian website taken by an aid worker for the organisation.

As well as these major disasters, between June and the end of January the charity also raised the profile of other issues. These included addressing the scale of female genital mutilation, fears that Afghanistan could slip back into civil war as well as the developing situation in the Central African Republic.

Unicef has several high-profile "goodwill ambassadors" and partnerships that both help publicise the charity’s cause but also raise funds. The charity has fostered close ties with football and in the past six months this has led to CF Barcelona extending its sponsorship deal with the organisation as well as Manchester United hosting a black tie ball in aid of Unicef.

Its use of celebrities has also helped it draw attention to specific fundraising initiatives. When the Typhoon Haiyan disaster hit the Philippines, David Beckham wrote an article to the readers of the Daily Mirror to draw attention to the emerging crisis. Similarly, celebrities such as Tinie Tempah, Rita Ora and Ewan McGregor took part in a video raising awareness of the humanitarian situation in Syria.

At the start of June, Unicef’s Index score, which measures overall brand health was 14.2 and by the end of January it was 14.5, with the charity’s average Index score across the seven months being 14.3. However, within this were a mild dip in August and early September followed by two peaks – one small one in mid-October (15.9) and a larger one in December (17.2).

We are using a four week rolling average on these results so there can be a slight delay between an event happening and it showing up in the data. The first peak seems to have been driven by the charity’s response to Syria (and associated awareness and fundraising activities) following the international community’s decision not to intervene militarily while the second was spurred on by the situation in the Philippines. 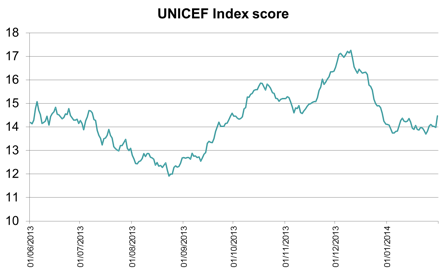 Looking at the Ad Awareness scores – which measure the levels of engagement with a campaign – it is clear that Unicef’s typhoon appeal resonated strongly and among particular groups. While the scores for people with high incomes and low incomes both increased, the high income went up higher and quicker (from 2.2 to 5.6 between 11 November and 8 December) whereas the scores for people on low incomes went up less and went up later (from 1.2 to 3.7 between 25 November and 1 January). 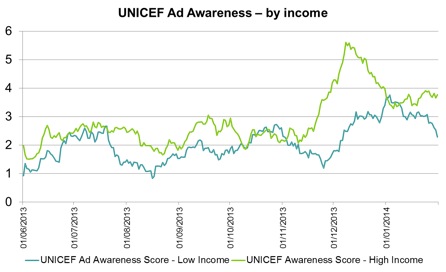 Similarly, the typhoon appeal had a more immediate and greater impact on women than men. For the rest of the period we are looking at, the both genders’ Ad Awareness scores mirror each other closely. On 11 November the Ad Awareness score for men was 2.2 and for women it was 2.3.By 9 December the score for women was 5.6 while men’s was 4.4. Women’s scores remained higher than men’s through to the end of February. 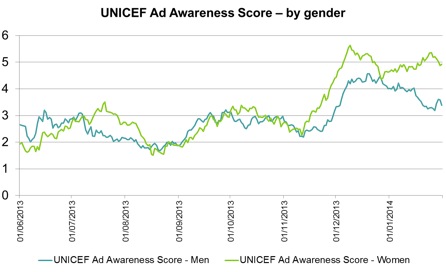 There were also differences between the genders when it comes to Unicef’s Attention scores. Broadly speaking men’s scores earlier in the year when Syria dominated the agenda, with the peak coming in September following the western powers’ abortive military mission. However, the highest score for women come during the aftermath of Typhoon Haiyan and the female peak (7.1) being +0.7 points above the peak for males (6.4). 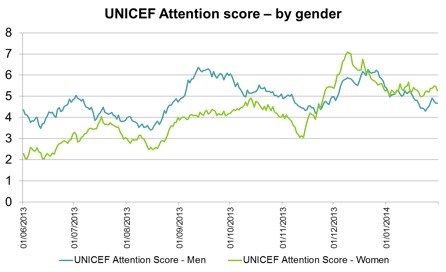 The value scores – that measure people’s propensity to donate – are notable for a couple of reasons. The first is how low they are compared with the charity’s other measures – men are below zero for most of the time and women dip below it on a couple of months as well. This could be a symptom of the challenges facing foreign aid organisations when it comes to getting people to donate generally and not only in times of emergency.

The second is that the gap that exists between the scores for men and women for most of the period covered. The average score for a man is -1.4 compared to +1.4 for a woman. Only in October when it became clear military intervention would not happen in Syria and it would be left to aid organisations to influence the lives of the dispossessed did men’s scores catch up with women’s and they remained almost exactly the same throughout the typhoon appeal. 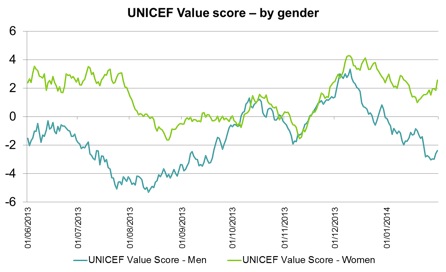 Aid organisations face a challenge when it comes to staying in the public consciousness outside of emergencies. A particular issue is keeping ongoing conflicts and disasters in the minds of consumers and this is where Unicef has done a good job on Syria. Although the conflict has been underway for almost three years, the charity has found ways to draw attention to it.

Unicef has made sure that it has some strong cards to play. This comes in the form of giving media organisations access to its efforts on the front line of disasters such as Syria and the Philippines. It also undertakes its celebrity activity with great care, making sure not to over-expose them but instead to give them resonance.

Like many charities, Unicef can struggle to engage men and those on lower incomes. Its value scores are also very low indicating that many people don’t think about donating to it except in emergencies.  However, the better figures the charity achieved during stages of the Syria crisis and the Philippine typhoon suggests that when it matters it can engage effectively with the public.

Rebecca Walton, head of brand at Unicef UK, said: "These findings are encouraging. Every day, Unicef is helping children in the toughest circumstances. The need is immense right now, with conflicts in Syria, South Sudan and the Central African Republic putting millions of children in danger. At the same time our field teams continue to deliver emergency aid to children in the Philippines who are still reeling from the devastating impact of Typhoon Haiyan.

"Communicating about our emergency work is critical to helping us reach millions of children in urgent need every year. Our own research shows that 86 per cent of peple in the UK who are familiar with Unicef would potentially support us in the future.

"We are grateful for every single donation we receive, with every supporter having the power to make an incredible difference to children’s lives."