Breast Cancer Campaign, Together for Short Lives and Travis Perkins

The building industry has a macho reputation, but Travis Perkins, the building supplies firm, has subverted this stereotype to great effect for its charity partnership with Breast Cancer Campaign and the hospice charity Together for Short Lives.

Over the past two years, the builders’ merchant has created a range of pink products to sell to its mainly male customer base. It has also sprayed some of its fleet of delivery trucks pink and emblazoned them with its charity partners’ logos.

The unconventional partnership has raised more than £840,000 for the charities and helped the firm to win Business of the Year at Third Sector’s Business Charity Awards 2012.

Norman Watson, charity committee chairman at Travis Perkins, says that it takes raising money for good causes very seriously, with all 18 companies in the group matched with at least one charity partner. "We’ve been working with Breast Cancer Campaign and Together for Short Lives for almost three years now," says Watson. "We didn’t set out to win anything; it’s just what we do." 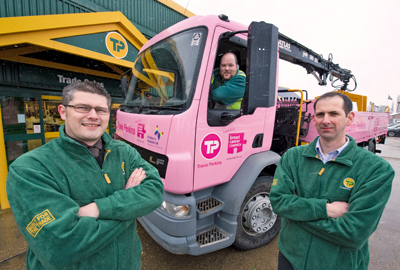 Since becoming chairman of the committee last year, Watson has devolved responsibility for fundraising to individual branch level, and the staff now take more of a lead.

"We have a ‘Travis Pinkins Day’, when staff dress up in pink and persuade our customers to part with cash," says Watson. "We have typical money-raising stunts that everyone does, such as raffles,
but we also have people who go the extra mile: one staff member climbed Snowdon every day for a month."

Watson says that the pink lorries have gone down well with customers and members of the public. "The reaction to the lorries was fantastic," says Watson. "On one occasion, someone walked out of their house with a cheque for £1,000 and we asked customers to text in if they spotted a pink lorry as part of a prize competition."

Despite the association between pink and breast cancer, the company splits the money it raises from its activities equally between the two charities it supports, sending both a cheque once a quarter.

Some staff are signed up to payroll-giving schemes while others donate the pennies from their weekly wages as part of an initiative called Small Change/Big Difference.

Watson says that winning a Business Charity Award has meant a lot to staff, who were informed about the win through emails, messages on staff noticeboards and announcements at branch meetings. "The staff were immensely proud to be recognised and it was great to be up there on an awards night with well-known companies such as Asda," he says. "But it’s all just a by-product of what the staff do every day."

Travis Perkins will continue to work with Together for Short Lives and Breast Cancer Campaign for at least another year. In 2013, the firm plans to convert a property it owns into two flats and will ask customers and suppliers to donate skills and materials towards the build. Once complete, the flats will be auctioned or sold next autumn and the profits will go to both charities. "As far as we know, we don’t think a company has done this before to raise money for charity," says Watson.