During the five years before they merged to form Breast Cancer Now in 2015, Breast Cancer Campaign and Breakthrough Breast Cancer raised only 2 per cent of their total income from legacies.

After the merger, the new charity knew there was huge opportunity for growth, but it had a dilemma about how to talk about such gifts.

"We couldn't say - like many charities - that our work would stop if people didn't leave gifts in wills or show what we had achieved with legacy donations because it was always such a small part of our income," says Lauren Songour, the charity's direct marketing manager for gifts in wills.

The charity also feared that younger supporters would be put off by its mission of making 2050 the year in which the last woman dies of breast cancer, because many of these people would not expect their wills to be executed by then. "We knew we had to develop a legacy proposition that was rooted in what really mattered to our supporters," says Songour.

So in August 2015, just four months after the merger, BCN embarked on a project to design a new way of talking about legacies, starting with a series of interviews with people who worked at the charity: everyone from the chief executive and trustees to the staff who communicated with supporters on a daily basis. Each was asked what they believed the charity could achieve with a thriving legacy programme.

"We were a new organisation, with a new goal, and we wanted to be sure the proposition we created was in line with the ambition of the future work of the charity and those who had set it," says Songour. "Taking on board staff perspectives meant we could ensure we had senior staff approval and that the final product was in line with the overall goals of the new charity."

Next on the agenda was a series of telephone interviews. Carried out in partnership with the creative agency BurnettWorks, eight in-depth interviews with supporters - including legacy pledgers, cash and regular givers, community and in-memory donors - gave the charity an insight into people's connection to the cause.

Questions centred around how breast cancer charities had featured in the supporters' lives, how they supported breast cancer research, what they hoped would be achieved with their support, what their priorities were and how they felt about their relationship with BCN.

Some of the results were surprising. "They weren't worried about the 2050 goal," says Songour. "We'd been overly concerned about that being an issue, but our supporters understood that there would still be a need for the charity after 2050 and their legacies would still be needed."

The results also indicated that the supporters who felt most connected to the cause would consider leaving legacies, although by and large younger supporters seemed willing only to give specific sums rather than residuary legacies.

Armed with these findings, BCN began the task of composing several legacy marketing messages that - according to its research - ought to resonate with supporters.

These five messages (see below) were then tested, with the help of the marketing analysis agency FastMap, by means of an online survey in which 277 supporters participated from across the charity's cash, regular giving and lottery programmes. Asked which message they felt would be most likely to generate enquiries about legacies from the public, 25 per cent chose message 1 and 24 per cent chose message 2. 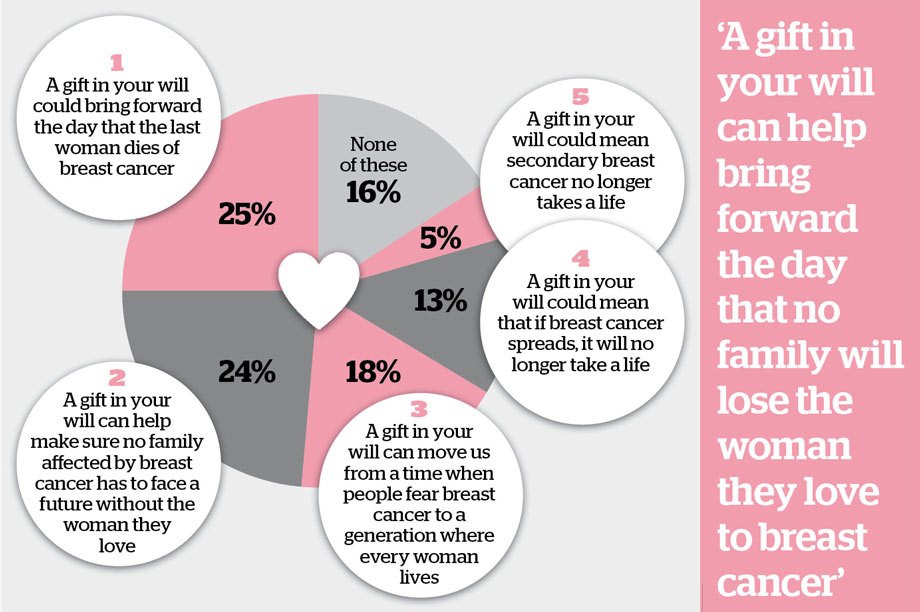 Songour says these two messages were the clear favourites across 12 questions that sought to establish how attention-grabbing, comprehensible and likely to spark conversation the messages were.

Of these, message 2 was the preferred choice of Songour's project team, an amended version of which - "A gift in your will can help bring forward the day that no family will lose the woman they love to breast cancer"- was selected in May 2016 as the official message for all the charity's legacy marketing materials.

"It was based on things our supporters really care about: their personal experience of breast cancer and the family connection," says Songour.

In July 2016, the message was used in BCN's first legacy-specific direct-mail campaign as a new charity. It also featured in a three-week legacy-focused telemarketing campaign and a new information pack for people who enquired about legacies.

All three communications channels featured powerful predictions by staff and supporters as to how legacies could help in the fight against breast cancer. For example: "No daughter will die from secondary breast cancer"; "No mum will be too sick from chemo to do the school run"; "No wife will be diagnosed too late".

Since last summer, Breast Cancer Now has experienced a 24 per cent rise in the number of enquiries about legacies. Songour says the legacy message has also been added to campaigns run by various teams at the charity, which she says was possible only because her team involved staff in the project from its inception.

"My one tip for charities that are thinking about creating new legacy propositions is to form a project team with representatives from different departments across the charity," she says. "It makes spreading the word about gifts in wills to different audiences so much easier."