People's attitudes to charities have changed since coverage began of the death of Olive Cooke, writes an associate director at YouGov

Over the last few months there have been a number of news stories that paint charities in a bad light. The main focus has been on the "hard-sell" tactics of some organisations and two stories in particular received a lot of exposure. The first was the death of poppy seller Olive Cooke in May after she reportedly felt "tormented" by cold-callers from charities. In June the Daly Mail led on a story about how some charities were "hounding" vulnerable people with calls.

But what impact have these stories had on the public’s perception of the charity sector? We used YouGov’s CharityIndex to find out. CharityIndex measures the public’s perception of the sector, asking 100 people each day about their attitudes and opinions of 44 charities. We have looked closely at those who are most closely engaged with the sector to see if their perceptions have changed over the past three months. We chose this specific group as they are charities’ natural constituency and any change in their opinions could prove problematic for the sector as a whole.

The obvious place to start is the Buzz score to assess whether this group has heard any news stories about charities in the previous two weeks and whether they thought the stories were positive or negative. Among those we would define as being typically engaged with the sector there has been a significant decline on Buzz in the last three months. The drop of 17 points indicates an ongoing increase in negative sentiment around charities in the media since the middle of May. 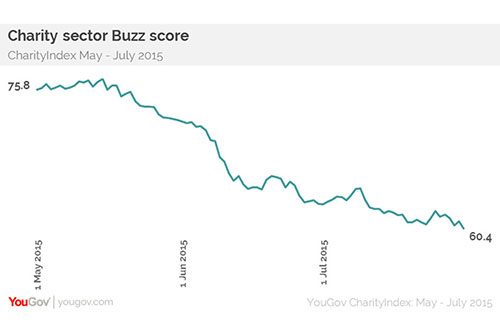 However, it does not always follow that negative media has an impact on a charity’s general brand health. To see if it has in this case we have looked at the charity sector’s Index score, which combines the six brand health sentiment measures to give an overall picture of how a charity is faring. Among our target group of people most aware and engaged with the charity sector the negative media coverage has also translated into a small but notable decline in the sector’s overall brand health. The Index metric dropped off by almost three points in this period, from 81.5 in late May to 78.4 in mid-July, although it has rallied a bit since. 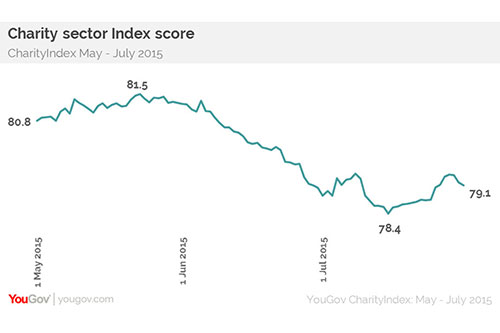 Crucially, the decline in brand health has also fed through into people’s willingness to donate to charities in general. People who are aware of and engaged with charities are now significantly less likely to consider donating £1 to charity than they were three months ago. Their Consideration score – measuring whether they would think about donating – has declined by three percentage points, with the drop beginning in late May. 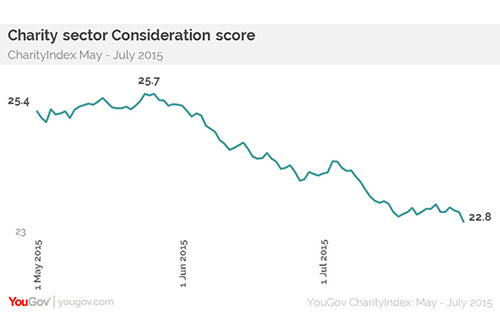 While it is inevitable that negative news stories will have reached the eyes and ears of people most engaged with charities, the concern for the sector is that the media frenzy seems to have reduced some people’s willingness to donate. However, there is a wider issue here that needs to be considered.

Since the financial crisis charities have been under increasing pressure to raise funds for their activities with the supporters being relied on for help and donations. As a result, some among the public and media expect more from organisations – in some cases expecting them to use money only in ways they favour, in others to conduct themselves in a matter that they deem fit. When charities are seen to fall short or to take a misstep, the media is now seemingly much more willing to probe into their activities.

It seems unlikely that we have reached a critical mass whereby charity donors have started to move away from supporting organisations because they are being asked to do too much. However, among the most engaged audiences negative stories have clearly made some people less likely to consider giving. While the recent bad publicity has had an impact on charities’ perceptions it is by no meansirreversible and it may well end up being a good thing if it leads to changes in the way potential donors are approached.