Awarded to a marketing partnership between a business and a charity that has used the company's products to promote the charity's cause or brand, or helped to raise funds for the charity

Miko is a family-owned company that supplies coffee to hotels, restaurants and cafes across the world. In 2006, the company created a fairly traded brand called Puro after increasing numbers of customers requested ethically sourced products.

As part of its environmental policy, the company decided to select a charity partner with a connection to coffee production to benefit from the sale of Puro-branded products. With climate change and rainforest destruction threatening the future of coffee farming, the company chose the environmental charity the World Land Trust.

Under the terms of the cause-related marketing partnership, Miko has committed 2 per cent of sales from its Puro Fairtrade coffee to the purchase and protection of areas of rainforest with exceptional biodiversity in coffee-producing countries.

So far, the partnership has raised £300,000, which has enabled the creation of rainforest reserves in Ecuador, Brazil and Colombia in South America. In total, 5,600 acres of rainforest have been bought and protected. It is hoping to acquire a further 2,200 acres. 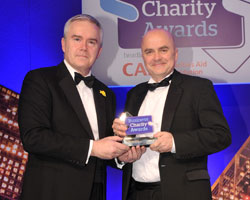 Miko has also committed £5,400 a year to fund a ranger in Ecuador who will protect the rainforest reserve from loggers and poachers and send photos and stories that can be shared with the partners' customers and supporters.

Awareness-raising has included the Webcam In The Forest initiative - real-time footage of a hummingbird feeder in Ecuador was transmitted to cafes in London serving Puro coffee. It was launched in 2008 by the natural history broadcaster Sir David Attenborough, a patron of the trust.

The relationship has helped the World Land Trust secure further corporate partnerships with companies in other industries. There have also been commercial benefits for Miko. The company's rainforest conservation work has helped it become a supplier to the National Trust, the Royal Parks and many other institutions.

The partnership continues to go from strength to strength. In January 2012, Miko and the World Land Trust acquired their latest rainforest reserve in Colombia, which is the only protected location in the world for the critically endangered golden poison frog. In May 2012, Miko will also take its first group of Puro clients to see how money has been spent protecting the rainforests in Brazil.

Peter O'Reilly, corporate social responsibility partner at General Mills UK and one of the category judges, said that the partnership encompassed a number of winning elements. "There was a clear synergy between the charity and the business - the collaboration factored in both longevity and room to grow."

- See who the other winners were at this year's awards