Awarded to a successful charity partnership between a business with a UK turnover of less than £6.5m and a UK charity

As the government urges the voluntary sector to persuade people to think about legacy giving, the Free Wills scheme operated by QualitySolicitors, a brand that brings together independent law firms, shows how it can be done.

The scheme, which began in August 2010 and has now been extended indefinitely, offers free wills to selected clients and supporters aged 55 or over, combined with a suggestion that they leave a gift to the children's charity Barnardo's. The company estimates that £2.5m has so far been pledged in legacies to the charity.

Under the scheme, the law firms waive their usual charges for will writing and instead receive a set fee from Barnardo's. The firms receive a standard fee of £70 for a basic will or £120 for mirror wills - these are used when a husband and wife or partner make almost identical wills.

The collaboration began when Craig Holt, chief executive of QualitySolicitors and a family law barrister, saw first-hand the work of Barnardo's during a child protection court case. He then approached the charity to see if they could work together.

There are currently more than 220 QualitySolicitors-branded branches in the UK, of which about 100 participate in the scheme. The number of branches is expected to rise to 600 by the end of 2012, with more legal firms likely to join the scheme. 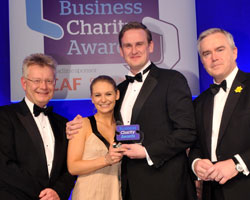 The partnership has been of mutual benefit. Barnardo's has gained access to the client base of the law firms; QualitySolictors has been able to offer its services to the charity's extensive supporter network. QualitySolictors credits the partnership with helping to raise its profile as a friendly, reputable brand with strong corporate social responsibility principles.

QualitySolictors law firms have also supported local Barnardo's branches with legal advice and helped to promote the Free Will scheme in Barnardo's shops during Remember a Charity Week last September.

One of its law firms also took part in a team challenge to raise money for Barnardo's Rachel House project for homeless young people in Bury, Lancashire.

Peter Gilheany, director of Foster Communications and one of the judges in this category, said: "It's an innovative idea that is beneficial to both parties and reaches an important audience for Barnardo's."

- See who the other winners were at this year's awards