Cancer Research UK is in discussions with one of its leading corporate partners about the use of women in revealing outfits at boxing events in aid of the charity after Third Sector made it aware of concerns.

Ultra White Collar Boxing routinely employs "ring girls" wearing leotards and other revealing outfits to hold signs up during its charity boxing matches. The partnership has raised more than £15m for the charity since 2013.

Third Sector is aware that supporters have been surprised and upset to see women employed in this way at UWCB events in aid of CRUK. UWCB had previously received a complaint about this issue, the charity told Third Sector.

In January, Formula 1 racing bosses decided to end the tradition of using "grid girls" at its events, saying the practice was "at odds with modern-day societal norms". At the time, the Women’s Sports Trust called on all sports to follow the lead of Formula 1 and "reconsider the use of podium girls, ring girls and octagon girls".

However, UWCB said in January that it would continue to use ring girls and their male equivalents, "ring boys", at its events. Writing on Facebook, the company said: "We are pleased to say that we will continue to employ ‘ring girls’ (and boys where available) at all Ultra White Collar Boxing events."

The post added that this was "part of the tradition of boxing".

One of the images accompanying that post shows two ring girls in leotards and a boxer holding a cheque for CRUK. In other pictures, ring girls are holding CRUK-branded collection buckets.

Other images online show the widespread use of ring girls at boxing events organised by UWCB to raise funds for the charity.

They also appear in promotional photographs and videos that feature CRUK branding.

In its latest annual report, CRUK said it was committed to becoming a "sector leader" in bringing "excellence and best practice" to equality and inclusivity across its brand. 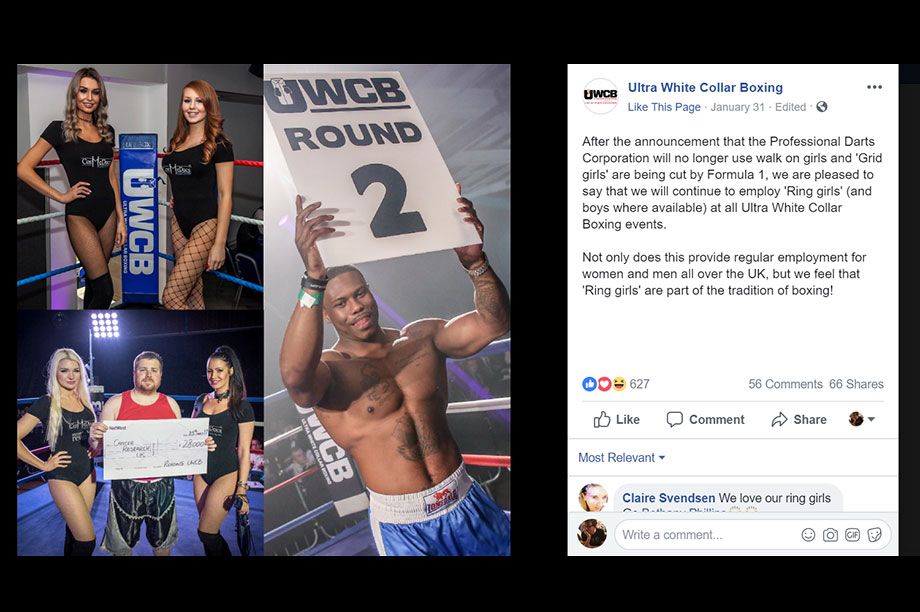 It said: "We recognise that there is much to do to realise our ambition to be regarded as an EDI [equality, diversity and inclusivity] sector-leading organisation; however, we are fully committed to achieving this ambitious objective within the next three years."

CRUK confirmed that it had raised the issue with UWCB after being contacted by Third Sector.

In a statement, Teresa Hicks, the head of community development at CRUK, told Third Sector that UWCB events were organised by Ultra Events, which is responsible for all decisions and delivery. But she added: "We’re in discussions with Ultra Events about the roles men and women play as ringside card holders at its boxing events.

"We’re grateful to all the participants who’ve chosen to fundraise for CRUK through Ultra White Collar Boxing events. Since 2013, people taking part in Ultra Events have raised more than £15m for our life-saving research."

A spokesperson for Ultra Events, which runs the UWCB shows as well as thousands of other fundraising events, including Ultra Ballroom and Ultra comedy nights, said it had staged more than 1,000 boxing shows since 2009. During that time more than 50,000 men and women had taken part in the boxing events, of which about 70 per cent were men and 30 per cent women, the spokesperson said.

"So far a total of more than £16m has been raised by Ultra Events for CRUK," said the spokesperson. "We estimate that the total audience for our shows has been in excess of a million and we have only ever received one complaint about the women who hold up placards between rounds to indicate which is the next round. We are in discussions with CRUK regarding the situation."

The spokesperson added that it had also employed men to hold placards and aimed to raise a total of £20m for CRUK by 2020.