As one of Britain’s leading charity brands, Cancer Research UK is continually searching for innovative ways to engage the public in its mission to beat cancer.

Crucial to the impact of any such innovation is its ability to improve both the reach and rate of that engagement, while complementing established campaign activities, including nationwide cash collections, multichannel advertising and online giving.

The opportunity to achieve this impact is highly valuable in a sector where brand competition for share of mind and wallet is no less intense than it is among consumer brands, as Sam McAllister, CRUK’s brand activation lead, explains: "In a cluttered charity market, we have to work hard to get people’s attention.

"With 60 per cent of our website traffic coming from smartphones, we are very keen to explore ways to maximise the mobile channel.

"Location-based technology is particularly appealing because it enables easy giving in a context that is relevant to the individual."

That the British public loves smartphones is well documented, with reports suggesting that, on average, we check our devices more than 100 times each day.

While this has positioned the smartphone as a natural hub for consumer advertising, the balance between effective mobile engagement and the quality of the smartphone user’s experience has proven difficult to strike, with much mobile advertising seen as disruptive and intrusive.

Devicescape Engage uses a person’s proximity to existing public wi-fi networks to trigger the delivery of notifications to smartphones at numerous public locations with high footfall.

Messages delivered for CRUK contained links to the charity’s website, where recipients were encouraged to join in the World Cancer Day Act of Unity by making donations or supporting the campaign by wearing Unity Band bracelets. 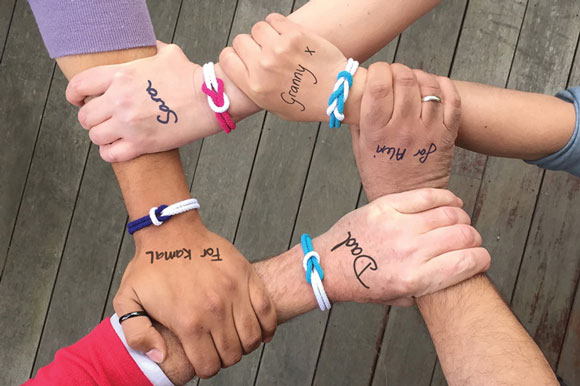 CRUK was able to drive an average click-through rate of more than 9 per cent, with some locations delivering CTRs above 15 per cent. Engagement in the transport sector was particularly successful, and high-street banks and retailers (including Waterstones) also returned excellent levels of engagement.

By building proximity marketing into its World Cancer Day campaign, CRUK was able to achieve high visibility across a wide footprint and drive increased traffic to key online content.

The success of any charity outreach campaign depends on the charity’s ability, first, to maximise visibility and then to take each prospective supporter on a journey from awareness, through engagement and ultimately to donation and action. The various means by which charities seek to do this have unique strengths and challenges.

Even in the digital age, volunteer-driven cash collection in public spaces remains a core charity activity. It excels at generating visibility and enables spontaneous donations from members of the public who might not otherwise have engaged. However, there are well-known challenges, says McAllister.

"Engaging with our supporters face-to-face through volunteer fundraising remains of paramount importance to us, and we work hard to secure a high volume of quality collection sites across the UK," he says.

"But recruiting sufficient numbers of volunteers and the process of matching these to the available opportunities remains challenging. We pride ourselves on giving both our volunteers and our supporters the best experience, so the rigour and resource required to deliver this at volume will always present barriers to achieving the income potential we believe is possible."

And although visibility might be high at the select locations where volunteers are present, the apologetic member of the public who has no spare change is an all-too familiar figure. In response to this, CRUK has been at the forefront of contactless giving, having rolled out hand-held devices at cash collections as well as in their shops throughout the country.

"Online giving is extremely convenient, and our website is highly supporter-centric and intuitive," says McAllister. "Where we have to work hard in enabling this support is by driving awareness and motivation to act. People don’t routinely visit our website, so we need to encourage them to make that visit, and we need to ensure that every journey is seamless and relevant in order to convert the visit to action." 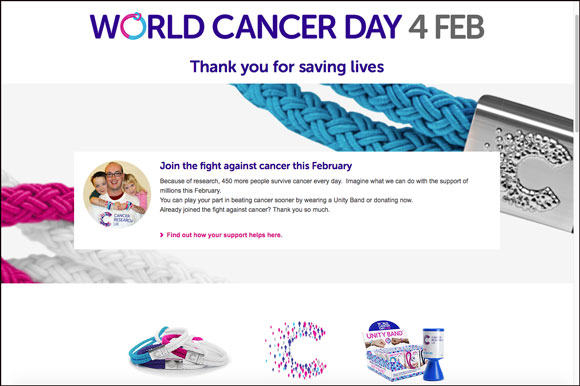 Taking place on 4 February each year, World Cancer Day gives the charity the opportunity to build on the impact of its annual brand advertising campaign burst from January to March.

"For CRUK, World Cancer Day is the culmination of a two-week fundraising and awareness campaign," McAllister says. "We want to motivate everyone in the country to join in one incredible act of unity by wearing Unity Bands on 4 February.

"As a brand-led campaign, we utilise the noise and conversation generated through our brand advertising in January to drive a direct response. The campaign highlights the role we can all play in fighting this terrible disease, which will now affect one in two of us in our lifetimes.

"By making small donations and showing solidarity through wearing the Unity Band, our collective action will accelerate progress and ultimately help us beat cancer sooner."

Unity Bands were available from the CRUK website, as well as in the charity’s shops and from a number of high-street corporate partners. An integrated multi-channel marketing campaign was supplemented by media partnerships with the daily free newspaper Metro and Sky Sports, and volunteer fundraising initiatives across the length and breadth of the UK.

Devicescape gave CRUK the opportunity to boost visibility and greatly extend the reach of spontaneous engagement, while also driving increased traffic to the charity’s website.

The Engage solution uses a huge network of existing wi-fi points in popular consumer destinations to deliver proximity engagement, replicating the Bluetooth beacon functionality and experience. Because it requires no new hardware to be deployed, nor any existing equipment to be modified, the solution makes proximity messaging possible across an enormous and highly diverse footprint.

Beginning 30 January, Devicescape Engage triggered the delivery of messages from CRUK to consumers’ smartphones at a range of high-footfall retail, service, leisure and transport locations.

The messages contained links that brought consumers to the charity's website, where they were encouraged to purchase Unity Bands or make donations.

"Because Bluetooth beacons have not been widely deployed, brands have so far lacked the means to harness proximity engagement at scale," says Owen Geddes, vice-president of market development for Devicescape.

"But because this solution uses existing wi-fi to establish presence, brands can now run proximity campaigns that engage consumers according to time and location at many thousands of high-footfall destinations where it was not previously possible.

"Crucially, there is no need to wait for venue owners to deploy Bluetooth beacons, which is both expensive and time-consuming."

Devicescape’s analysis of the campaign data offered more detailed insights into variations in responsiveness by type of location, illustrated in the table below.

The campaign returned extremely high levels of engagement across transport networks. Seven of the top-10 performing location types were in the transport sector, with Heathrow Airport topping the CTR table at 17.8 per cent.

Passengers in Addison Lee taxis, who returned a CTR of 8.5 per cent, showed that it is not only on mass transit that consumers are willing to engage with compelling messages.

Among retailers, Waterstones emerged as the clear leader, with customers returning a CTR of 15.5 per cent, with Boots and John Lewis also making a strong showing.

Customers of high-street banks were also keen to engage with the campaign. NatWest led the field with 12.8 per cent, closely followed by HSBC and Barclays.

"It was rewarding to see such a high level of engagement with the World Cancer Day campaign at so many locations, which was very much in line with our experience across other campaigns," says Geddes.

"What was fascinating in particular was the response across UK transport networks. It seems logical that smartphone users should be highly receptive to targeted mobile engagement while they’re in transit, where dwell time and mobile usage are high, and it was great to be able to back that up with real data from the campaign.

"It offers a valuable insight to CRUK, to Devicescape and to the transport sector itself."

The campaign drove a significant increase in traffic to the CRUK website, with the ability to increase awareness among prospective supporters in public spaces seen as a clear benefit, says McAllister.

"By combining location-specific technology with other campaign activities, we were able to add another awareness touch point to reach new supporters," he says. "Working with Devicescape meant we could target locations (campaign 'hot-spots') where we knew audience exposure was high: near shopping centres, through our shops or corporate partners on the high street, and in transit locations. This meant we could optimise the CTR by ensuring that messaging was relevant and engaging to them.

"Ultimately, we see this as having the potential to become another important channel within our integrated approach, as we continue to unite the nation in the fight against cancer on World Cancer Day."

This article first appeared on Campaignllive