The charity has unveiled a new report and film that show the impact tobacco packaging has on children. The Packaging of Tobacco Products was published this week alongside a short film that illustrates children’s attraction to the way cigarette packs are designed. The report and film are part of Cancer Research UK’s The Answer is Plain campaign, which is asking people to sign a petition to remove all branding from tobacco packaging.

What’s in the film?

The film, available on YouTube or the charity's website, shows scenes of six to 11-year-olds as they innocently discuss what attracts them to the brightly coloured and attractively designed cigarette packs. Children’s reactions to the packs include: "It makes you feel like you’re in a wonderland of happiness", "The pictures actually look quite nice. Ice cubes and mint", "It reminds me of a Ferrari", "Is that the Royal Sign?" and "Yeah. Pink, Pink, Pink".

What has the report found?

It reviews tobacco industry documents from the past half century. Several internal tobacco industry documents describe how packaging has been developed to appeal to new smokers, notably teenagers, through its size, colour and design. The report also shows that some brands of cigarettes are packaged to appeal specifically to women and others to men. Packs developed to target women are often designed to be long and slender, with pale or pastel colours indicating femininity, style, sophistication and attractiveness. 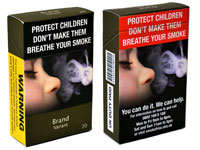 After watching the video, viewers are encouraged to sign a petition calling for plain cigarette packets on a dedicated campaign website.

The charity has been promoting the campaign on its Twitter feed using the hashtag #packetracket. There is also a tab on Cancer Research UK’s Facebook page featuring the video and petition. The charity has also sent out newsletters and is targeting bloggers as part of its wider PR strategy.

The simple but effective video starts with close-ups of the children talking and then zooms out to show the cigarette packets they are discussing. Until that point the viewer would believe the subject matter is something innocent, so the video has a stronger impact when the true nature of their discussion is revealed. Teaming it with an immediate call to action – sign the petition – is a clever move, which will prompt more people to back the campaign.