Many charities have seen the recession as a chance to woo staff from the private and public sectors. But what is it like to cross the boundaries? Emily Ford speaks to Tony Armstrong and two others who have moved into the voluntary sector

As the civil servant in charge of the Government’s national obesity programme, Tony Armstrong played a key role in setting public policy. "I had a lot of responsibility," he says. "It was a great place to be."

It was also a demanding, high-pressure role. After nine years in the civil service, Armstrong wanted a fresh challenge. A year’s secondment working on a regeneration project in Brighton had brought him closer to the people who were benefiting from his work. "I wanted to experience that again. And I wanted to be in an organisation that was quicker, without the layers of bureaucracy and politics."

He spotted the advert for the job at pedestrian charity Living Streets on the closing date and threw in an application. "I’ve always been fascinated by the impact of the built environment on people’s health, so it seemed a good fit," he says.

The biggest change has been the lack of nay-sayers, he says. "In the civil service people look at the reasons why something can’t be done. When I first started, I kept asking ‘can I do that?’ and the answer was always ‘of course you can’."

He does, however, miss the prestige of his old role. "Seeing your ideas discussed in Parliament was quite an adrenaline rush. Now I get similar rush when we get media coverage."

Working for a charity has changed his view of the public sector. "If I think back to how I used to deal with third sector organisations, I would not do it the same way now. There’s a lack of understanding of the value of charities. They try to keep us at arm’s length."

Armstrong, who is 33 years old, has not ruled out going back to the public sector. "But at the moment I’m very happy where I am," he says. 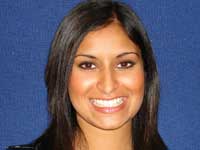 A golf day with Alan Hampton; a celebrity fashion show at the Hilton; a lunch with Lord Falconer. The glamour of organising events always appealed to Helen Raghu, who began her career at PR firm Kenyon Fraser in Liverpool. Private clients would hire the firm to put on glitzy corporate dinners. "It was brilliant training," she says.

Two years into her time at the firm, she got involved in running a charity quiz night for the NSPCC. "It was a really hard one to pull off, but it introduced me to the idea of holding events for charities," she says. A spell working for Big Brother winner Craig Phillips cemented her desire to switch sectors. "He did a lot of charity work. In a way, it was a bridge into the sector."

Raghu says she works harder now. "With corporate events, everything’s paid for by the client," she says. "Now I have to work with a much smaller budget. I constantly need to be thinking of new ideas because there’s a lot of competition with other charities."

Her colleagues are also more motivated, she says. "In a PR company there’s
a quick staff turnover. Here, everyone is very passionate about what they do – they’ve all been here for five or six years."

She doesn’t miss much about the private sector. "I love being able to help an organisation rather than just make money for an individual," she says. 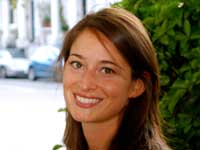 She had enjoyed the fast pace of finance. "Being so close to global markets was very exciting," she says. "But although I liked the energy and competition of finance, I was never really fired up by the products. Work was such a huge part of my life that I wanted to do something I was really passionate about."

Largey wanted to use the skills she had learned to be effective in a charity. Hearing about the microfinance job was "one of those moments in life when everything seems to fall together". She had some concerns, however. "I was worried that I wouldn’t be as challenged and that the charity wouldn’t be as efficient," she says. "But I saw very quickly that they were running this charity like a business, with very focused goals."

The move involved a substantial drop in salary. "When I was considering the pros and cons, that was important, but not important enough to stop me," she says.

Many Opportunity International donors work in the City of London, so Largey is still close to the financial sector. Her job involves building relationships with individual donors, corporates and foundations, and long hours are still the norm. "Opportunity International in the UK is a very small organisation and there is a lot of work to be accomplished by a small number of people, so we all have to work hard to achieve our goals."