When Kris Hallenga was diagnosed with incurable breast cancer at the age of 23, she was shocked to discover how common it was among young women and how little they knew about it.

She began investigating and concluded that the main breast cancer charities were targeting older women - and that women of her generation were being ignored. So she took it on herself to become a full-time "breast cancer warrior" for younger females.

Two years on, she has set up the charity CoppaFeel! and has begun the second phase of an ambush awareness campaign called Boob Hijack, which encourages more teens and twenty-somethings to check their breasts to reduce the chances of late diagnosis. 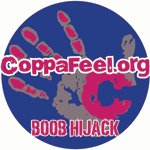 The campaign, which was developed by the integrated marketing agency Archibald Ingall Stretton, urges women to wear stickers over their breasts to promote the importance of regular checks. The stickers were also put on statues, shop mannequins and posters - anything, in fact, with breasts. The charity recruited 'B-Teams' through its website to distribute the stickers across the UK.

The campaign, which began in October last year, was adopted by 14 universities and, according to the charity, reached 15 per cent of the female student population.

Outrageous stunts generated publicity: in one, the CoppaFeel! logo was projected on to the Anthony Gormley sculpture the Angel of the North in Gateshead for 90 minutes until police intervened. In another, Peter Dickson, an announcer on the TV talent show The X Factor, called the adult channel BangBabes and asked the female presenter to check her breasts. A recording of this went viral and generated thousands of hits.

Hallenga says it doesn't matter if the campaign titillates, as long as the message gets across.

"If I had seen a message telling me to check my breasts before I was diagnosed with cancer, I would definitely have taken notice," she says. "If we just plant a seed, that's enough. We have to be proactive."

For the second phase of the campaign, which began last month, the charity adapted the 1990s Hello Boys wonderbra advert for a new poster: Hello Boobs has now been seen at 48 London Underground stations.

CoppaFeel!'s clever take on the Hello Boys advert, which was voted the most iconic advertising image of all time in a recent survey by the Outdoor Media Centre, is certainly arresting. Playing on such a well-known visual makes it stand out, and the succinct strapline is straight to the point.

Encouraging women to get physically involved - literally - is crucial to ensure that behaviour change, which is central to the campaign, can start to take root. The multi-faceted 'hijack' approach to the wider activity is imaginative, creative and well targeted.

That said, behaviour change, as opposed to awareness, is a long-term process. So while I hope that this campaign will make young women take notice of such an important issue, the question is whether they will in fact take real action as a result.