There are 1.9 million single parents and they don't generally get a very good press. So the single parent family charity Gingerbread faced a challenge when it launched a campaign in September to change perceptions and tell more people about its services.

The idea was conceived in July and developed when the charity secured the help of two designers, Abi Ellis and Simon Attwater, to create some publicity concepts free of charge.

Gingerbread is a relatively small charity so the campaign had to be, in the words of a spokeswoman, "cheap and cheerful". It eventually opted for the slogan "Single Parents: You're Brilliant", which was depicted on posters and postcards. 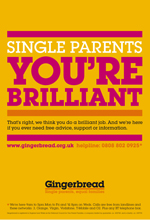 The spokeswoman says the slogan was chosen to provoke controversy in the wake of the government's prop-osals on benefit reform, which she says often resulted in single parents being depicted as victims.

The brightly coloured posters and postcards featured text but no images because the charity felt that it was difficult to depict all single parents in a single image.

Bright, bold lettering was chosen in order to make the design stand out from similar materials in locations where it would be displayed, such as job centres, children's centres and Citizens Advice bureaux.

A total of 10,000 posters and postcards were printed, but print and distribution cost less than £2,000.

In addition, Gingerbread enlisted its celebrity ambassador, Laila Rouass, one of the stars of the TV series Spooks, who gave interviews to the media to raise the charity's profile.

On the day the campaign went live, according to Gingerbread, its website had the highest number of unique visitors of the year - 35 per cent more than the average day - and the average number of web pages that each visitor viewed increased by nearly 50 per cent. The charity says that visits to the Gingerbread Facebook page also increased by 38 per cent.

Gingerbread's campaign creative emits a feelgood factor, and I like the viral nature of its spreading of support between single parents, as well as its simple message, which potentially provokes thought among people who would normally disapprove.

The celebrity-endorsed PR activity generated media coverage and inbound traffic to Gingerbread's website from authoritative sites such as netmums.com and askamum.com. This, alongside the offline and social media activity, probably contributed to the rise in website visitor numbers.

The campaign has increased brand awareness with a limited budget. The next step is to turn website hits into more tangible results. Objectives such as acquiring more Facebook fans and increasing the charity's membership and support can be more directly linked to fundraising results and community building.