The presenter Eamonn Holmes and the adventurer Bear Grylls have backed a campaign that asks people who are in employment to donate their salary from the last hour of the year to the disability charity Queen Elizabeth's Foundation for Disabled People. The charity works with people who have become disabled by illness or injury.

Celebrities including the pop group The Saturdays, the actors Keeley Hawes and Ben Barnes and the presenter Ben Shephard took part in an event in London's Trafalgar Square organised by the Royal British Legion to mark Remembrance Day on 11 November. 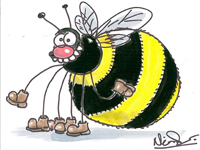 More than 50 famous people, including the actors Patrick Stewart, Tony Robinson and Joanna Lumley, the cartoonist Nick Park and the comedian Vic Reeves, have drawn bug-themed doodles to be sold to raise money for the Ulster Wildlife Trust. The pictures will be auctioned on eBay from 16 November.

The comedian Victoria Wood will take to the stage for the first time in nearly 10 years for a show put on by the British Heart Foundation aimed at raising awareness of heart disease in women. The show, called the Angina Monologues, will take place in London on 5 December.

The Spandau Ballet singer Tony Hadley gave a performance of the band's 1980s hit Gold at an auction to raise money for the autism education charity TreeHouse last week. Hadley was a guest at the event, which was held at Arsenal Football Club's Emirates Stadium and raised £140,000.