The actor Dame Helen Mirren has become a patron of Women for Women International, which helps female survivors of conflict. "With the rise of brutal armed conflicts and extremism we are seeing unprecedented levels of violence against women, which means there has never been a greater need for the work of Women for Women International to support women survivors," she said.

John Boyega, who played Finn in the latest Star Wars film, visited Demelza Hospice Care Children. Boyega, who is from Peckham, southeast London, visited the hospice in nearby Eltham, where he spent time with children and families cared for by the charity and took part in a Star Wars-themed party.

The Hollywood actor and director has given his backing to a scheme from the NSPCC aimed at providing under one roof all the services a sexually abused child might need. Schwimmer, who is director of an initiative in California to support sexually abused children and their families, spoke about his work at an NSPCC conference in London.

The Duchess of Kent has become an ambassador for Samaritans. She has worked as a Samaritans volunteer and was the charity's royal patron between 1971 and 1999.

The Academy Award winning actor Mark Rylance has made a film for Survival International urging people to prevent the annihilation of tribal people around the world. Rylance has been an ambassador for the charity, which supports the rights of tribal people, since 2010.

The T-shirt worn by the tennis player Andy Murray when he won Wimbledon this year has raised £10,000 for Malaria No More through an auction. The world number two wore the charity's logo on his sleeve throughout this year's tournament.

The former Liverpool FC player and manager Graeme Souness has become a research ambassador for the British Heart Foundation. Souness, who had a heart attack in November, was first diagnosed with coronary heart disease 25 years ago. 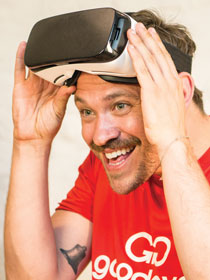 The singer Will Young (left) took part in the conservation charity WWF's virtual reality experience, which is aimed at raising awareness of the threats facing tigers. The Tiger Experience puts participants in the heart of the forest to witness the work of rangers who risk their lives to protect tigers from poaching.

The comedians Phill Jupitus and Marcus Brigstocke performed at a comedy night to raise funds for the disability charity Enrych. The veteran comedian Graeme Garden, who is an Enrych patron, had invited the pair to take part in the event, which raised more than £3,500 for the charity.

The singer Leona Lewis has given her support to a campaign by World Animal Protection to vaccinate dogs around the world against rabies. The charity said it had recently vaccinated its millionth dog and looked forward to completing the next million.

Martina Navratilova has become a patron of the Elena Baltacha Foundation, a charity set up by the late tennis player to help children from disadvantaged backgrounds learn to play tennis. Baltacha died from liver cancer in 2014 aged 30.