Celebrities: Ladies in red for the British Heart Foundation

Six famous faces took part in a scarlet-themed photoshoot to raise awareness of the British Heart Foundation's Bag It. Beat It. campaign, which invites people to donate unwanted clothes, books, DVDs and other items to their local BHF stores. The celebrities - the presenters Kate Thornton, Amanda Byram, Angellica Bell and Melanie Sykes and the actors Gemma Atkinson and Glynis Barber, were wearing dresses provided by the designers Stella McCartney, Amanda Wakeley and Catherine Walker and were photographed by the fashion photographer Elisabeth Hoff.

The magician Jamie Raven put on a special show at Clic Sargent's accommodation for young cancer patients and their families near University College Hospital in London. The Britain's Got Talent finalist performed tricks for patients, some of whom were undergoing chemotherapy, and learnt more about their experiences.

The Hollywood actor Michael Douglas was among the celebrities to give their backing to the Royal Bank of Scotland Kiltwalk, a series of events to raise funds for children's charities in Scotland. The presenter Lorraine Kelly was among those to take part in the Edinburgh Kiltwalk, which took place on 18 September. 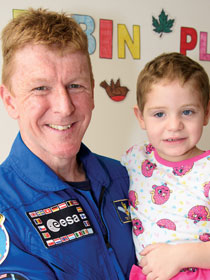 The astronaut Tim Peake (left) visited Great Ormond Street Hospital and met patients including six-year-old Maddison Webb, whom Peake first spoke to from space while she was in isolation as she underwent a bone marrow transplant.

The fashion and beauty vlogger Zoella has donated 12 outfits to raise funds for Stand Up To Cancer, the joint fundraising campaign from Channel 4 and Cancer Research UK. Zoella is one of a host of YouTubers working to clock up a collective 1,000 hours of fundraising for this year's campaign, which culminates in a night of live entertainment on Channel 4 on 21 October.

The Duke and Duchess of Cambridge visited Keech Hospice Care in Luton, Bedfordshire, as part of celebrations marking the charity's 25th anniversary.

The fitness instructor, aka Derrick Evans, has signed up as an ambassador for MoRunning 2016, a series of races to raise funds for the men's health charity, the Movember Foundation. Participants, or MoRunners, are being encouraged to wear fancy dress while they take part in one of the 27 events across the UK in November.

The former rower Sir Steve Redgrave was on hand to open a new £1m boathouse for Lea Rowing Club in north-east London, which had received a £100,000 grant from the Mayor of London's Sports Facilities Fund, which is managed by the Football Foundation.

A host of famous faces raised funds for their nominated charities at the annual BGC Partners charity day, which commemorates the 658 company staff who died in the terrorist attacks on the US on 11 September 2001. Celebrities to take part at the company's UK offices included the actor Tom Hardy, who raised funds for Battersea Dogs & Cats Home, the former boxer Chris Eubank and his son Chris Jr, who raised funds for Children with Cancer UK, and the presenter Phil Spencer and the cricketer James Tredwell, who raised money for the hospice care charity ellenor.

The actors Sir Roger Moore and Emma Thompson, the businessman Lord Sugar and the presenter Eamonn Holmes are among the celebrities to give their backing to a campaign from the legacy consortium Remember A Charity, aimed at making people think about what matters in life and encouraging a greater proportion of the public to leave charitable legacies.

The footballer John Terry is to be named as the first "WishMaker" for the charity the Make-A-Wish Foundation at its annual sports dinner, in honour of the work he has carried out for the charity. Terry has met more than 50 seriously ill children in support of the charity, for which he is an ambassador, and will be the guest of honour at the event in London on 8 October.