Nick Jonas, who is part of the Jonas Brothers, is one of a group of celebrities backing a new campaign by Chance UK, which provides mentoring for children with behavioural difficulties. The Big Influence campaign aims to highlight the positive impact adults had in the lives of the celebrities when they were young and encourage people to exert a similarly positive influence over today's children. The chef Jamie Oliver, the comedian Jo Brand, the actor Angela Griffin and the broadcaster Paul Gambaccini are also backing the campaign. 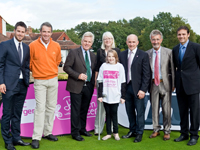 The Formula One pundit Eddie Jordan and the former boxer Barry McGuigan, who are both patrons of the cancer charity Clic Sargent, hosted a golf day at Sunningdale Golf Club on 19 October. Sport celebrities including Jamie Redknapp, Lawrence Dallaglio, Damon Hill, Mark Ramprakash and Sir Steve Redgrave, and the broadcaster Steve Rider, turned out to support the day, which raised £125,000.

The actors Hugh Dennis and Dervla Kirwan were among the estimated 1,800 runners who participated in the 23,000-strong 10-mile Bupa Great South Run to raise money for the Alzheimer's Society. The society is the healthcare provider Bupa's nominated charity for the race, which was in Portsmouth on 24 October.

Faye White, who is the captain of the England women's football team, opened a floodlit football pitch at Coloma Convent Girls' School in Croydon, south London, on behalf of the Football Foundation. The pitch was paid for by a grant worth £228,399 from the foundation, which is a charity funded by the Premier League, the Football Association and the government.

The broadcaster Jonathan Dimbleby was the voice of a WaterAid appeal, which went out on Radio 4 on 17 October. Dimbleby explained the need for clean water for people in the developing world and asked people to make donations to the charity, which aims to provide access to safe water for people who do not have it.