The author's candour about his experience with Alzeimer's has brought inspiration and comfort to many fellow sufferers. Mathew Little reports

Sir Terry Pratchett is somewhat uncomfortable about winning an award as a "celebrity". He simply doesn’t view himself as a celebrity.

"A celebrity is someone sitting in a jungle, eating worms," he says. It’s not him.

The author found international fame for books including the Discworld fantasy novels, but it’s his work on behalf of dementia charities that has landed him the celebrity charity champion prize.

Pratchett was diagnosed in late 2007 with a rare form of early onset Alzheimer’s and has since turned his attention to raising awareness and money for the cause.

When he was first diagnosed, Pratchett says, his initial reaction was anger – but this soon turned into a desire to improve the lamentably small amount of research into the disease and to support others who suffer from dementia.

In 2008, Pratchett made a donation of $1m to the Cambridge-based Alzheimer’s Research UK, a donation that his fans aim to match. The donation was made in US dollars, he says, because "it sounds larger than half a million pounds".

He also became an ambassador of the Alzheimer’s Society. This role has involved speaking at conferences and talking about Alzheimer’s in numerous interviews for radio, TV and newspapers. Most famously, he made a two-part documentary for the BBC, broadcast in February 2009, about living with dementia.

Pratchett says strangers still phone him to speak about the disease. "Having Alzheimer’s is kind of welded into my knowledge of myself," he says. "People will automatically pick up on that and talk about it."

Jeremy Hughes, chief executive of the Alzheimer’s Society, says that Pratchett’s willingness to speak about his experience has created a greater sense of openness about the disease. "Somebody in the public eye saying ‘look, I’m going to tell you about it and how I’m going to live my life as a result’ was really significant," says Hughes.

Pratchett likens the situation with Alzheimer’s to the gradual change in perception of cancer that occurred during the 1960s after the current affairs presenter Richard Dimbleby announced publicly that he was suffering from the disease. Before then, cancer was a taboo subject – obituaries tended to avoid the word, stating merely that people had "struggled with a long illness".

Now, says Pratchett, cancer sufferers are seen as brave battlers, whereas people suffering with Alzheimer’s are just "old farts". But the author is trying to change that perception: dementia is a disease, not just the inevitable accompaniment of old age.

It’s a public role for which he relies on the backing of the Alzheimer’s Society. "I make statements but check everything with the society," he says. "I don’t ask permission, but I check."

But perhaps the most public statement Pratchett can make is to carry on writing: his new novel Snuff has just been published. "One of the things I thought I should do is to continue doing my job," he says. "You’re up there as a kind of figurehead."

Hughes appreciates the example. "What Terry has said is that, with the right kind of support, he can live with his dementia," he says.

"He has also highlighted the importance of supporting a charity like the Alzheimer’s Society with the research we do, and the care and support we provide to people up and down the country."

By speaking candidly and openly about Alzheimer’s, Pratchett believes the disease will lose some of its power over its sufferers.

"As a writer of fantasy fiction, you know that to name evil is to have some power over it," he says. "At least you now know what you fear and what it is you’re hating." 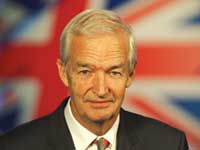 TV newsreader Jon Snow has been involved with charitable causes throughout his career. After university, he worked for the New Horizon Youth Centre in central London, which provides assistance to young homeless people. He has since become the charity’s chair and in July hosted a one-off fundraiser that included performances from comedians Dara O Briain, Ed Byrne and Al Murray. In March, he was among a group of celebrities who became teachers for a day during Teach First Week. They taught in schools with a high number of disadvantaged pupils as part of the annual campaign by the charity Teach First. He has been president of the cycling charity CTC since 2007 and is patron of the Sheila McKechnie Foundation, which is dedicated to developing a new generation of campaigners. 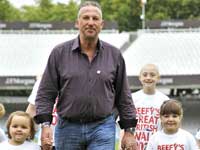 Former cricketer Sir Ian Botham remains a prodigious fundraiser. In April 2010, ‘Beefy’ walked through 10 towns to mark the 25th anniversary of his John O’Groats to Land’s End walk for Leukaemia Research, now called Leukaemia and Lymphoma Research. As president of the charity, he has hosted golf fundraisers and staged a number of special dinners over the past two years. He will take part in Beefy’s Great British Walk 2012, 10 events in which he’ll walk up to 20 miles a day. His efforts over 26 years have helped to raise about £13m for leukaemia and lymphoma research.