Charities get smart on the planet of the apps

Digital technology is being used by charities in increasingly creative ways to raise awareness of their work or to seek support for their causes. Sylvia Rowley looks at the latest trends and asks what will come next

From virtual protests to augmented reality smartphone apps, digital communication is rapidly changing the way that charities campaign, fundraise and even deliver projects.

In 2010, the charity Beatbullying achieved a digital first by holding a virtual march that called on the UK government to do more to tackle bullying. Earlier this year, it held a second march - this time a global one - that urged the UN to recognise bullying as a threat to children's rights. Tens of thousands of people created avatars - online characters of themselves - to take part in the marches and support the campaigns. Paul Skinner, founder of the pro bono charity marketing service Pimp My Cause, says: "The marches gave people opportunities to get involved in a way that simply wouldn't be possible with a petition."

High-tech antics such as these are coming within reach of more charities now that costs are falling, says Sebastian Stokes, digital channel lead at the healthcare communications agency Red Door Communications. He has his eye on one technology in particular. "2012 is being cited as the year for augmented reality," he says. "The technology has been around for a couple of years, but it's becoming much cheaper now."

Augmented reality allows computer-generated information to be laid over a real scene, and some charities have already started to use it. For example, the conservation charity WWF developed a smartphone app to get Londoners interested in their local environment by allowing them to see facts, quizzes and videos with their phones at 10 waterside locations around the city.

But Stokes says there is potential for charities to use this technology in a more advanced way at public events. The BBC's Frozen Planet recently brought virtual penguins and killer whales to shopping centres around the US using augmented reality, generating plenty of press and social media coverage.

"By creating something that will capture people's hearts and minds, you can get people to generate their own content and to share and talk about things that they wouldn't ordinarily talk about," says Stokes.

Another technology tipped to change the way charities communicate is the use of live, interactive maps. Andy Hood, executive creative development director at the digital agency AKQA, says that the combination of "open data, tools to visualise that data and social tools to enable individuals to view and contribute to that data" could change the way that charities communicate in situations such as disasters.

For example, during the 2011 Japanese earthquake, Google created maps that showed the worst-hit areas, road closures and shelters. This helped charities and aid agencies to coordinate their efforts and kept the public up to date, says Hood. Social enterprise Ushahidi has a similar service, plotting crowdsourced information from social media onto maps of conflict or disaster areas.

On a more light-hearted level, interactive maps, especially those that can track people's locations through their smartphones, could be used for charity events. Kat Knight, digital account handler at Forster Communications, says: "I think we'll see another wave of geographically specific apps. Perhaps these will be used to track people's race times at a fundraising event, or we might see charities tapping into the trend for running secret events via sites such as the GPS treasure hunting site Geo Caching."

Of all digital tools, social media has been the most widely used by charities so far. Jamie Woolley, head of digital communications at Greenpeace UK, says that Facebook and Twitter allow the charity to "develop much deeper relationships with supporters - and detractors - by having one-to-one conversations". Newer social media platforms such as the image-sharing site Pinterest are also gaining ground, says Knight. Microfinance charity Opportunity International recently used the site to create a virtual Mother's Day quilt, raising funds by asking users to buy images in honour of their mothers.

Digital tools are evolving quickly but the big question, according to Linda McBain, digital marketing manager at Save the Children, is whether they produce the end result the charity is looking for. "New digital trends don't always convert into donations or actions," she says. "We're doing things that are innovative, but you also need to get the basics right. Email marketing is still king in terms of driving action."

CASE STUDIES: How charities are using digital media to get to their messages across 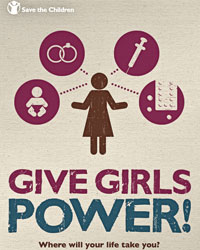 Save the Children: Give Girls Power!

In June and July this year, the international relief charity Save the Children created an online quiz to accompany its petition to David Cameron, the Prime Minister, before a family planning summit. The game put the viewer into the shoes of a young woman in a developing country who did not have the power to make choices about having children. When gamers reached a bad outcome, such as being refused contraception, they were offered a 'fix this' button that took them through to the petition. More than 15,000 people signed the petition and, of those who signed up through the game, more than half were new supporters. 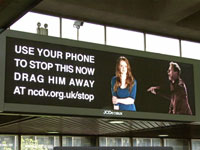 National Centre for Domestic Violence: Drag Him Away campaign

The National Centre for Domestic Violence held an interactive billboard campaign at London's Euston Station in April to raise awareness about how people can stop domestic violence. The campaign ran on five large digital screens and encouraged passers-by to drag an abusive man across the screens away from the woman by using their smartphones. It then asked people experiencing violence to contact the charity so it could start the process of getting injunctions.

Widely seen as one of the most successful charity apps yet, iHobo was designed by the advertising agency Publicis London for the homelessness charity Depaul UK in 2010. The app asks iPhone users to look after a young homeless person for three days to raise awareness of the cause and of the charity. It has been downloaded more than 600,000 times over the past two years and has generated an estimated £1.2m-worth of media coverage.


- Read our interview with Vicky Browning, director of CharityComms

- See how Brook and FPA combined their communications teams

- Discover how to create an effective communications campaign

- Know when the time is right for a rebrand