Many charities are struggling to develop digitally, report claims

A survey of more than 300 charity digital heads has found that 95 per cent of them believe their organisations have no HR strategy for improving the digital capabilities of their staff. 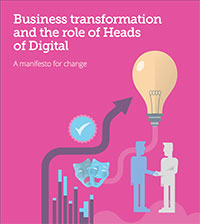 The new report, Business Transformation and the Role of Heads of Digital, suggests digital teams feel they are struggling to get departments other than communications, marketing and fundraising to pursue digital transformation.

However, it also challenges digital heads to re-examine their attitudes, to think in terms of business change rather than digital transformation and to work more closely with HR and operations.

The report was produced by the not-for-profit IT service provider Eduserv with input from the UK charity communicator membership network CharityComms, which used its newsletter and social media channels to invite digital heads to take the survey.

The report includes interviews with senior figures outside digital departments in organisations that can claim success in becoming more digital, such as Asthma UK and the Cystic Fibrosis Trust.

Asthma UK has developed a digital asthma action plan for beneficiaries after judging that they were poorly served by the paper-based action plans currently provided in primary care.

Asthma UK chief executive Kay Boycott said: "Technology is of course a key enabler, ut it’s not necessarily what we think about first. Whatever we do, we think about business objectives and the needs of our audience first, not what digital can do as such."

The Cystic Fibrosis Trust has expanded its volunteer base by 450 per cent as a direct result of its HR and digital teams working together to allow staff in all departments to use a variety of tools, including Skype, Yammer and Office 365, to bring them closer to the people they serve.

Lucy Semmens, former director of strategy and performance at the trust, said: "Our digital strategy isn’t just about the website. What we’ve looked at first is how we engage with each other as colleagues and with the wider community  in a more direct and personal way.

"The culture you need around transformation, the HR issues that come out of that, the technology – they just go hand in hand now. I would get very frustrated now if digital and IT were making decisions without HR being at the table every time."

Third Sector also spoke to Chris Sherwood, the chief executive of the relationship guidance charity Relate, about the issues raised by the report.

Sherwood, who was not involved with the research, was promoted last year from director of digital, communications and policy and was previously director of innovation and development at Scope.

He said that in his three and a half years at Relate the charity had been through a big shift in its understanding of how important digital services were to its clients.

"When I arrived, our national website was a terrible presence and I had to fight very hard in the organisation as director of digital to get investment in that area," he said. "It’s changed from no one being interested to everyone being interested and wanting to go faster.

"Demand for [better digital services] is actually coming from our service teams and from finance, because they see it as a way to get income in."

Sherwood said he thought the statistic that 95 per cent of digital heads believed their organisation’s HR strategy was lacking illustrated the challenges the sector faced in recruiting and training people with the right skills, but said Relate offered its affiliated staff training in social media and was also piloting greater digital service delivery such as counselling by webcam.

The charity’s digital team has grown from one person to three, but Sherwood has also set up a multidisciplinary team to innovate around Relate’s service offer, bringing together a counsellor, someone from a service design background and an IT consultant.

"We have shifted the conversation in the organisation from ‘let’s have a look at our digital services’ to ‘how can we look at our whole service offer and in the future look at how our clients can make choices about which is the best channel for them’," he said.