How charities can win corporate backers

Partnerships such as the one between the Prostate Cancer Charity and Royal Mail can help with fundraising and other benefits in hard times. Mathew Little talks to the experts and comes up with 10 tips

In 2011, as the coalition's public spending cuts began to bite, the charity UK Youth was candid about how it would cope - it would turn to business for support. "Our services are too important to let them disappear," its chief executive, Charlotte Hill, said at the time. "We have actively sought out businesses that share our values and are prepared to back the work we do financially."

Many voluntary organisations are facing similar dilemmas and making similar choices. But business support can take many forms, from traditional fundraising partnerships to the receipt of pro-bono business expertise or the selling of charity services to corporations. Those who seek help from the private sector will find similarities with the traditional avenues of public sector or foundation funding - but there are also contrasts. Here are 10 tips for how best to clinch that deal:

Businesses are at one with trusts and foundations on this. The scattergun approach - firing off identical applications to as many businesses as possible - does not work. "Research the company rather than cut and paste a standard pitch," says Mike Kelly, head of CSR at the financial services firm KPMG. "Less is more, so target five rather than 50 businesses." Large companies will publish criteria for the kind of charitable projects they want to support. "Find out about a corporate's CSR agenda," says Emma Gittoes, community projects adviser at the Co-operative.

Whether it's a grant application or a flagship fundraising partnership, there is a right time to apply. The Co-operative, for example, changes its charity of the year partnership every other year: charities that want to be considered for the 2015 partnership should therefore make the application at the start of 2014. Other businesses, such as the Royal Mail (see below), are moving to partnerships that last two or three years. "If you are at the wrong part of the business cycle, you are just wasting loads of resources," says Kelly.

3. What about the workers?

Corporations really like partnerships that give an integral role to their workforce, whether through fundraising activities or volunteering. "If two charities are active in an area in which we'd like to work, but one was able to offer some employee involvement, that one would definitely be more appealing," says Katie Pinnock, director of UK corporate contributions at the pharmaceutical giant GSK. Gittoes calls it "partnership plus". She says: "We have 105,000 staff - how can they get involved?"

Business partnerships are not always about fundraising; they can also involve selling charity services. The 2013 partnership between Rethink Mental Illness and Legal & General (see below) entails the finance and insurance company buying the charity's training services. In one of the most famous recent corporate partnerships, a Relate sex therapist wrote the Sex Census report, highlighting findings from a survey conducted in Ann Summers shops.

Businesses are frequently attracted by donating pro-bono business knowledge. The information technology company Fujitsu is modernising the tills and technology in Shelter's charity shops, for example, and the finance giant Deloitte is assisting Help for Heroes with financial planning as the charity expands. Klara Kozlov, corporate advisory manager at the Charities Aid Foundation, says businesses like pro-bono support because they want to make a sustainable, long-term difference.

You can call it brand synergy or enlightened self-interest, but charity-corporate partnerships are not just a one-way exchange. Businesses also need charities, and this need is often expressed when business activities have an image problem. The beer manufacturer Heineken is working with Addaction on its alcohol addiction projects. Banks are falling over themselves to be seen as socially responsible. Prostate Cancer UK's emerging partnership with the bookmaker Ladbrokes stems in part from a need to redress the negative image of betting.

Corporate partnerships do not result only from great pitches: personal relationships are often crucial. "Turn up to as many events as possible and meet people," says Pinnock. "Network, do your homework and don't give up."

Peer-to-peer relationships between chief executives in charity and business often lead to partnerships - Prostate Cancer UK uses a team of ambassadors to make the initial approaches to businesses. "It's the way of the world, and we are using that as a big part of our strategy," says Sukhi Dale, corporate partnerships manager at the charity.

8. The partnership's 'home' is throughout the charity

Corporate partnerships are often run by the corporate fundraising department at a charity, but this can limit them artificially. "You can't deliver anything without internal engagement," says Dale. "It's absolutely pivotal, not only to winning a partnership but also to maintaining it."

Prostate Cancer UK has a business development board that includes the chief executive and other directors.

9. Can you make the impact tangible? 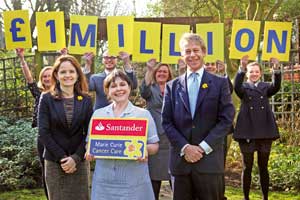 Many businesses don't want to raise money generically but to direct it to tangible purposes. The 2012 partnership between the bank Santander and Marie Curie Cancer Care (right) funded 37,500 hours of nursing care. A fundraising appeal for Action for Literacy at the financial giant KPMG has raised £150,000. "But rather than report back in isolation, we would say that it enabled 1,250 young people to gain access to better literacy provision," says Mike Kelly of KPMG.

10. Tell the story as widely as possible

Corporations rarely want to hide their good works under a bushel, so communication is an essential part of a charity's strategy. "How are you going to tell the story?" asks Kelly. It has to be communicated to different generations of employees and to the outside world, he says: "It cannot simply be buried in an annual report. It's got to be very multimedia."

Months of preparation lay behind the selection of Prostate Cancer UK as the Royal Mail's partner in 2012, a partnership that will last two years. The charity carried out a review of companies best suited for it to partner with, a modelling exercise that received contributions from trustees as well as all employees. "We were looking beyond fundraising for a genuine and true fit," says Mark Bishop, director of fundraising at the charity. Top of the list came the Royal Mail, its high proportion of male employees seen as a vital factor.

When the Royal Mail announced its selection process, Prostate Cancer UK submitted its application. From the initial list of 30 charities, PCUK went forward to a staff vote and came top, with the backing of 36,000 employees.

The fundraising target is at least £2m, which will be used to fund up to 50 specialist prostate cancer nurses. 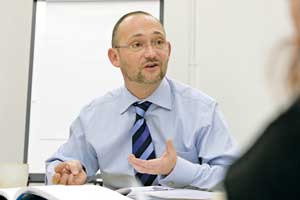 If your cause is "less widely supported" by the public than others, you have to make sure that a partnership will bring a business benefit to both sides, according to Bea Richardson, acting head of major gifts at Rethink Mental Illness. The business benefit in the case of Rethink's partnership with Legal & General is the training it gives to the finance company that enhances its 'group income protection' insurance product for companies: Legal & General has bought in bulk Rethink's training package, designed to help employers address mental health problems in the workplace. The training for managers on mental health questions aims to ensure a mentally healthy workforce and reduce absence.

But the partnership includes a fundraising element that builds on the foundation of business benefit. Employee fundraising will take place throughout 2013, with a target of at least £10,000. Rethink staff will also appear at a number of conferences with Legal & General representatives.

- Should charities continually ask for money? Read arguments for both sides