The Charity Brand Index, compiled each year by Third Sector in partnership with the market research company Harris Interactive, has taught us much over the past six years by providing a barometer of what the public – as opposed to donors – really think of charities. The information provided by the index can be used to improve fundraising methods and attract more donations and volunteers. And each year it has naturally focused on the movements of particular charities up or down the ranking and on analysis of why the public has taken this or that charity to its heart.

But now that we have six years of information, are there any general messages or trends that can be extrapolated from the index? The short answer is yes – although it is worth remembering that it focuses on the top end of the sector: it looks at the biggest 180 charities by voluntary income, which are clearly not representative of all 164,000-plus registered charities. But it does tell us what the sector can learn from these giants.

One lesson is that the top end of the charity world is not a closed shop. We have seen numerous cases of charities that used to be relatively obscure entering high in the ranking. Movember and Prostate Cancer UK have been among the big success stories recently; others have also punched above their weight and moved up the table, proving that innovation and investment pay off.

It is also clear that the charities with which people are most familiar don't always come highest in public opinion. Five of the top 10 charities in the ranking for 2014 do not appear among the 10 charities people are most aware of when they are presented with a list of names. Awareness is crucial to connecting with potential donors; but building a successful charity also requires a focus on engagement and innovation. 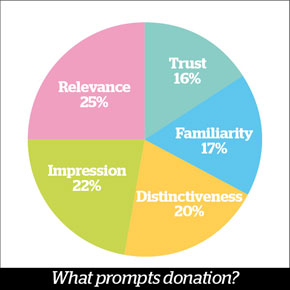 Perhaps the most worrying overall trend the index has identified concerns trust by the public. When we first devised the index, we found – as the chart below indicates – that trust was one of the five measures that people consider most important when making up their minds to donate or not, and which are therefore most linked with a charity's overall fortunes.

One might conclude that trust is a low priority because it is at the bottom of the list. The point, however, is that trust is in there in the first place; and its importance is backed up by other research suggesting that only when supporters are convinced that their money will be used in a worthy way will they part with their cash or time. So it is essential that charities communicate to the public and the donor audience that they are trustworthy. 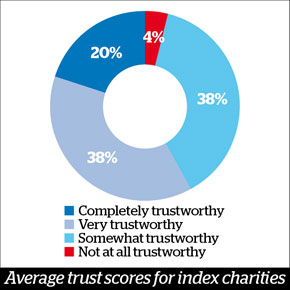 It would be wrong to suggest that charities are being seen as generally untrustworthy – far from it. Only nine of the 150 charities in the 2014 ranking are described by more than 10 per cent of respondents as "not at all trustworthy". Twice as many (19 out of the final 150) have no one at all saying that. The chart below shows the average "trust" scores for all charities in the 2014 index. From this, it is evident that trust is not the biggest issue that the sector faces: an average of only 4 per cent say that a charity is not at all trustworthy.

But there are signs that trust is something the sector must tackle. One of these is a reduction in the combined scores in the top two boxes headed "completely trustworthy" and "very trustworthy". This combined score in 2012 was 64 per cent, rising to 65 per cent in 2013 – a statistically insignificant change. But the significant fall to 58 per cent this year implies a sector-encompassing shift towards a slight loss by the public in their trust of these major charities.

One could argue that this is a blip, but other research indicates the same trend. A recent survey by nfpSynergy found that 56 per cent of respondents said they trusted charities "quite a lot" or "a great deal" – down from 66 per cent in 2013. This was the second-lowest figure since July 2007, when it was 42 per cent; as a result, charities have fallen to seventh on the list of most trusted institutions, behind small businesses and the royal family for the first time. 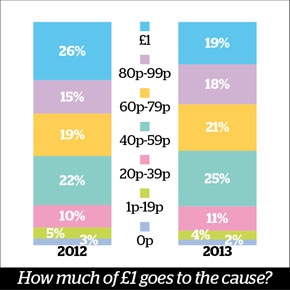 Then there is the question of how much of their donations people think goes directly to the cause. In a study carried out by Harris Interactive a few months after the Charity Brand Index of 2013, we asked: "Imagine you donated £1. How much of this £1 do you think would reach or help the cause?" Only 19 per cent of more than 2,000 nationally representative respondents said they thought the full £1 reached that cause – down from 26 per cent in 2012. Another worrying aspect of the survey was that 42 per cent said that less than 60p would go the cause they wanted to help. We are currently replicating this research to assess the picture for 2014 – the results are due shortly.

This trend was corroborated this year by the Charity Commission's biennial survey of public attitudes, which showed that people increasingly see the proportion of their donation that goes to the cause as the most important aspect of their trust and confidence. In this poll, 49 per cent of respondents said this aspect was important, compared with 43 per cent in 2012 and 42 per cent in 2010. The next most important aspect of trust was "making a positive difference to the cause they work for", which attracted 25 per cent of respondents this year.

So what lies behind these changes in trust? Joe Saxton, co-founder of the consultancy nfpSynergy, told Third Sector in June: "It's hard not to wonder whether the revelations over chief executive pay and some of the stories about alleged donations to terror groups in Syria have played their part." Other media coverage includes the BBC Panorama programme, broadcast in December 2013, that revealed Comic Relief's investments in arms, alcohol and tobacco. Comments about the programme on Twitter or news sites showed that many people were unconvinced by the investigation or didn't see it as a major issue. But the overwhelming sentiment was negative and might have affected how the public engaged with charities subsequently, although it is hard to assess for how long.

Trevor Morris, visiting professor in public relations at the University of Westminster, believes this type of media investigation would not have happened 10 years ago, and that it shows how attitudes towards the sector have changed in recent years. In an interview with Third Sector, Morris said charities had been slow to pick up on the fact that people were becoming less deferential towards and more questioning of charities, which were under ever-increasing scrutiny and needed to show the public or potential donors more clearly how and where their money was being spent.

The public is also aware of the MPs' expenses scandal and other public sector exposes in recent years, and there is an increasing desire by the public to know where their money is spent.

Overall, it seems clear that all charities – not just the 180 looked at by the index – need to reassure the public that as much money as possible goes to the cause to which they are donating. To say it is a big problem for the sector would be wrong, but it is surely an area on which charities should remain focused. It is also an area of opportunity. The more a charity interacts and engages with its audience, the more the audience knows about the charity and is reassured that its money is being used in the best possible way. A 2013 report into donor motivation, called Money for Good UK, by the think tank NPC, said that if charities improved the way they communicated impact and explained how donations were used, they could attract about £665m more in donations. 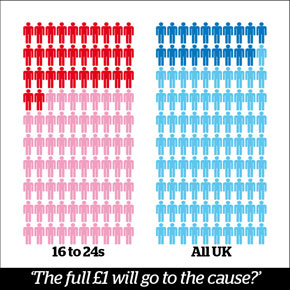 This is not the only opportunity. When we look at the question of trust by age, it is the youngest age group that is the most trusting. One in three of 16 to 24-year-olds say the whole £1 would reach or help the cause donated to, compared with 19 per cent of the population as a whole.

The younger age group is traditionally the hardest for charities to engage, but if it is also more trusting, there is a clear opportunity for charities to forge better relationships with it, and perhaps with other demographics that are generally harder to engage with. This opportunity might also be linked to the continued rise and use of social media illustrated by the index.

In the past year there have been a number of high-profile charity social media campaigns, some of which were not even started by the charities that benefited, and some of which have been truly global. Social media is not only changing the landscape in terms of how, where and when people can donate; it is also changing what drives people to donate.

But perhaps the biggest game-changer for the sector is that social media engages that younger audience of people who, though most trusting, are much less likely to donate to charity. And a change in the game is essential: research commissioned in 2012 by the Charities Aid Foundation and published in the report Mind The Gap showed that in the past three decades a growing generational divide in charitable giving in the UK has developed. More than half of all donations to charity (52 per cent) now come from the over-60s, compared with just over one-third (35 per cent) 30 years ago.

Where does this leave the sector as a whole? Charities remain one of the most trusted institutions in the UK, but these traditionally high levels of trust appear to be slipping, and recent events have placed more emphasis on transparency about where donors' money actually goes. Despite the economic squeeze, the UK remains one of the most charitable countries in the world, coming top of the developed world for giving money to charity – 76 per cent of Britons give to good causes in a typical month, according to the CAF World Giving Index 2013. So charities should meet the challenges head-on: engage with your audience, communicate what you do and how you spend their money, and use social media to build relationships with younger donors. The results can only be positive and will lead to a more engaged and knowledgeable donor base.