The highest salaries paid by the largest UK charities have been growing steadily in recent years. Third Sector analyses the figures

“No charity boss should get more than £35,000 per year. It should not be a cash cow for the bosses,” said one.

“Charities should be run by unpaid volunteers. Every penny raised should go to the target group,” said another.

“If they’re taking big fat pay cheques out of the people’s donations, instead of a reasonable, living wage, then they’re not a charity, just thieves,” a further person added.

This is just a flavour of hundreds of comments on a newspaper article about charity pay.

While most people in the voluntary sector would see these views as unreasonable, they give a sense of the depth of feeling that is evoked among the public by the salary packages paid by some of the UK’s largest charities.

Every two years since 2013, Third Sector has compiled a list of the highest salaries paid by the biggest UK charities. The study has documented gradual growth in the pay packages earned by the voluntary sector’s highest-paid individuals.

The top of the list is typically dominated not by household-name charities but philanthropic foundations, charitable private hospitals, arts bodies and educational establishments – that is, organisations that do little public fundraising.

This year is no different, with the Wellcome Trust again topping the list by a wide margin. 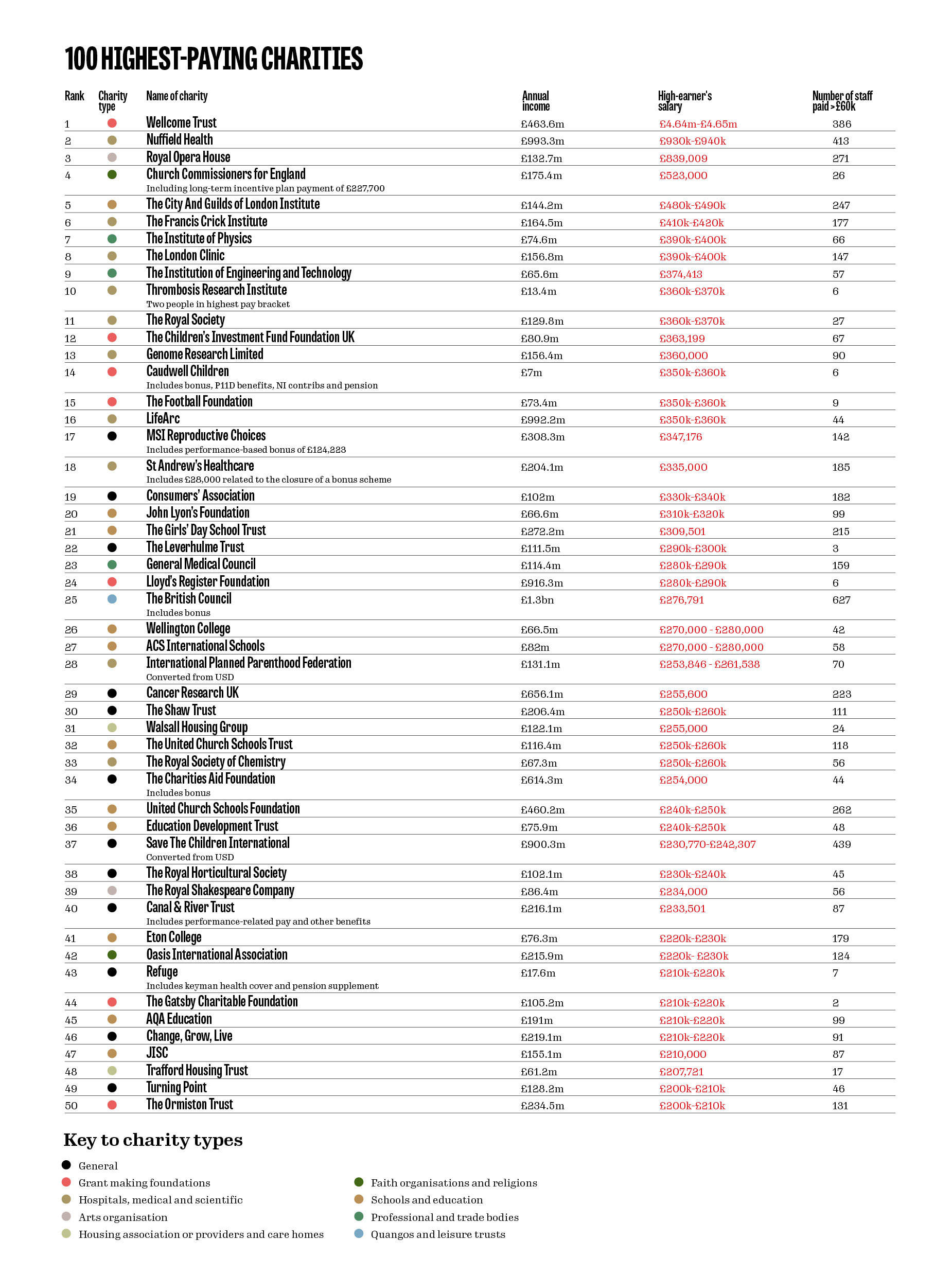 But the study, which is primarily based on annual accounts reflecting pre-coronavirus pandemic conditions, shows a considerable rise in top-level pay packages awarded by the UK’s largest charities compared with two years ago.

It is the first time that at least half of the salaries in the study are more than £200,000, with at least that amount paid by 54 charities on the list. This is up from 41 two years ago.

Although many of these numbers seem high, it is worth noting they are outliers in the UK voluntary sector, where most organisations have no employees, let alone individuals on six-figure salaries. By contrast, the median pay of FTSE 100 chief executives was £3.6m in 2019, according to think tank the High Pay Centre.

The trust employs its in-house investment team to manage its huge portfolio, which it says is more cost-effective and produces better results than if it were outsourced.

This team includes seven people who received total salary packages worth at least £1.25m over 2019/20, all of which outstripped the person in second place on Third Sector’s latest top 100.

The charity says remuneration for its senior investment team is directly linked to the long-term performance of its investments, which grew by more than £3bn last year despite the negative effects of the pandemic on global financial markets.

It says that over the past decade, investment returns have averaged just under 10 per cent a year in real terms, enabling its annual charitable spend to approximately double.

The highest-paid person not part of Wellcome’s investment team received a package worth £483,788, which would be enough to place sixth on the overall list.

The charity, which runs hospitals, wellbeing services and fitness centres, says it agreed to pay a bonus to Gray last year if he met “rigorously defined organisation targets, a standard practice across organisations and businesses of our size and complexity”.

Rounding out the top three was Sir Antonio Pappano, music director of the Royal Opera House, whose total remuneration of £839,000 included a base salary of £115,000, plus more than £600,000 of separately contracted fees for conducting and directing as required. The charity says the total level of fees varies from season to season depending on the number of Royal Opera House engagements undertaken.

The Church Commissioners for England moved up from 22nd on the list in 2019 to fourth in the latest study after its highest paid member of staff, its director of investments, received a long-term incentive plan payment of £227,700 as part of a £523,000 salary package. The charity confirmed the individual was still in post but refused to disclose their name.

Half of the top 14 charities fall into the hospitals, medical and scientific category, while seven of the top 10 featured in it two years ago.

The Institute of Physics, in seventh place this time, would have been in the top 10 in 2019 but its income dipped to a level too low for it to be in the top 150 charities that Third Sector used to compile the list.

While some larger charities attract opprobrium from certain sections of the public for, in their view, paying “fat-cat salaries”, it is worth noting that the highest-paid individuals at some of the biggest UK charities, including Oxfam GB, Save the Children UK and Sight­savers, do not feature in the 100 highest-paid list. This is despite all those charities being in the top 20 of UK charities by annual income.

To examine pay in different sections of the sector, Third Sector has used a broad definition of “general charities” to cover organisations that work in a range of areas but are more likely to have major fundraising activities and are therefore most concerned about public opinion.

Salary levels in this group, which comprises almost half of the charities in our top 100, are generally lower than in other categories and have grown at a slower rate.

By contrast, the median of the highest salaries paid by the grant-making foundations that made the list was up by £100,000 compared with two years ago to £285,000. This group included nine organisations, compared with six two years ago. 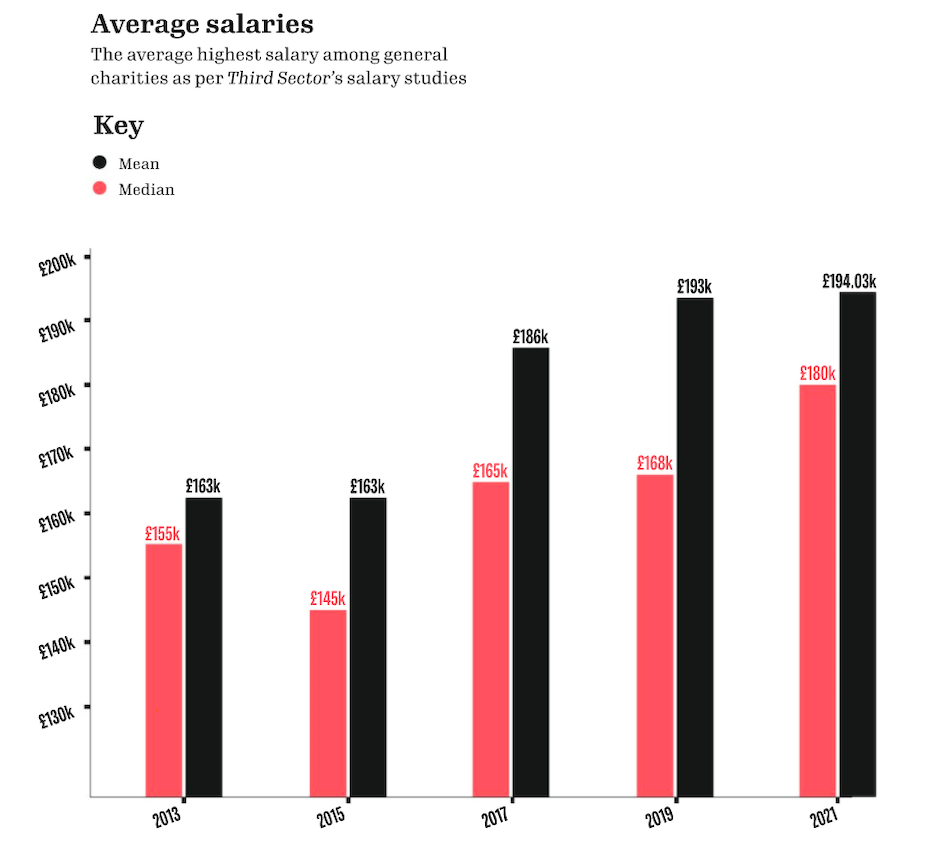 Kristiana Wrixon, head of policy at the charity leaders body Acevo, says the salaries seen in the top 100 represent a small fraction of the overall UK voluntary sector.

“The issue of executive pay in the sector is clearly of interest to the public, who, under­standably, want to know how any donations and public money a charity receives are being spent,” she says. “However, the largest 100 charities by income represent 0.06 per cent of registered charities in England and Wales.

“The salaries listed in this research are not representative of the breadth of the charity sector, in which it is much more likely that organisations will be run by volunteers.”

“In charities that employ a chief executive, often due to the complexity of the charity’s work and time commitment required to carry it out, our research shows that the median CEO salary is £55,993 (pre-Covid-19 data).” 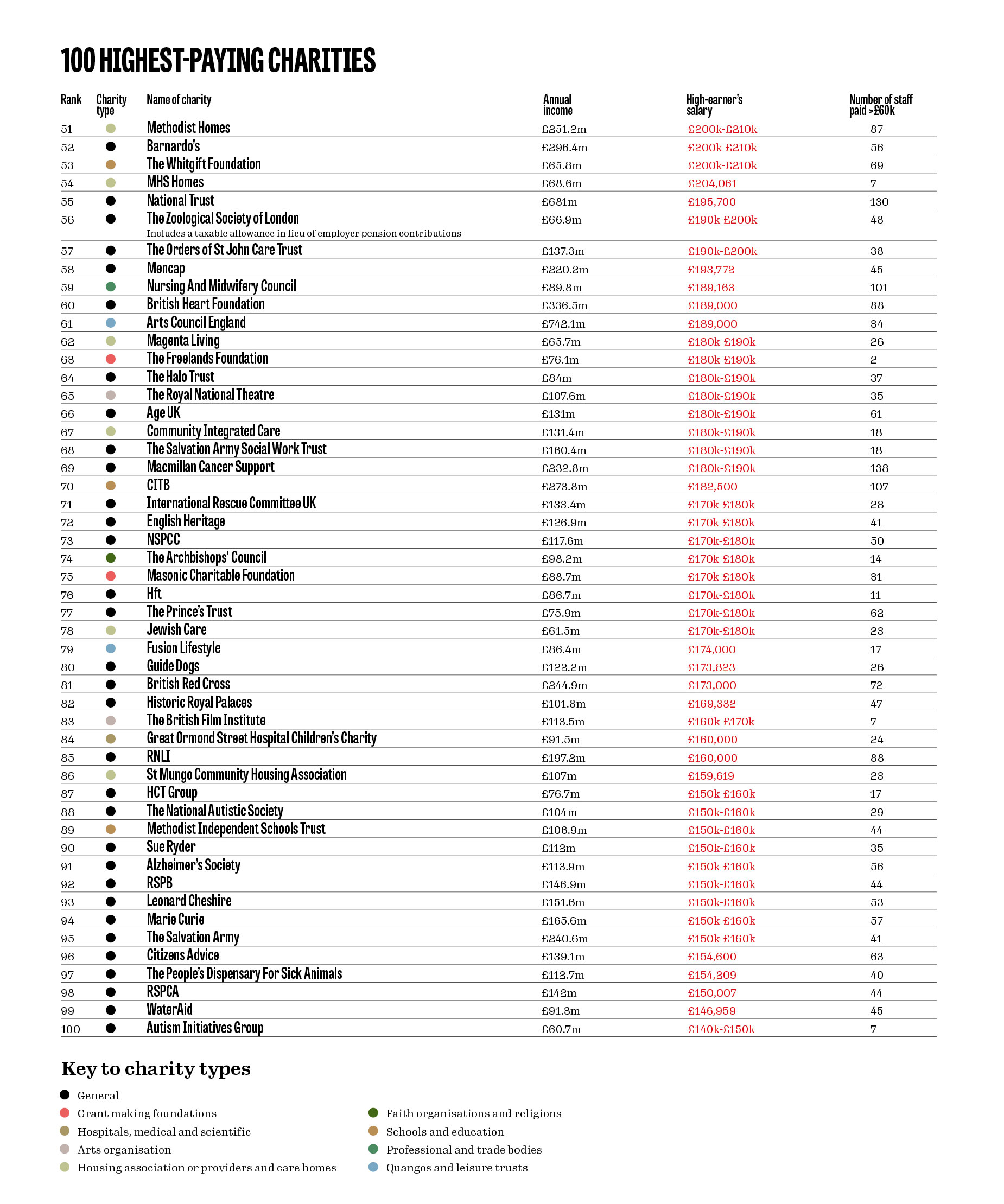 The British Council came out as the charity employing the highest number of people in this bracket with 627, up from 511 in 2017. Save the Children International remained in second place in this list, with 439 employees earning more than $75,000 as per its latest accounts, which are all in US dollars.

The Gatsby Charitable Foundation and the Freelands Foundation both had the fewest employees out of the top 100 earning more than £60,000 a year, with two.

The Gatsby Foundation, which is one of the grant-making charities set up by the Sainsbury family behind the eponymous retail chain, employed an average of four full-time equivalent staff in the year to the end of March 2020. Its two highest-earners were paid between £70,000 and £80,000 and £210,000 and £220,000, excluding pension contributions over the course of the year, its accounts show.

The Freelands Foundation, which according to its 2019 accounts employs 12 staff, was set up in 2015 by the media executive Elisabeth Murdoch to provide access to art education.

In 2014, a working group set up by the National Council for Voluntary Organisations, following negative media coverage of senior pay at some of the largest UK charities, recommended that charities should publish the pay details of their highest-paid employees.

However, the latest salary study reveals that almost two-thirds of the biggest-paying charities are not doing that in their annual reports. Third Sector’s research found that 65 of the top 100 did not name their highest earner.

This is a considerably higher proportion than two years ago, when 54 of the top 100 did not name their highest earner.