Third Sector's annual workforce survey finds this year that morale and confidence in leadership are up, but factors that make for staff retention are in danger of neglect. Annette Rawstrone reports

This year's Charity Pulse survey, carried out by Third Sector and Birdsong Charity Consulting, paints a generally reassuring picture of improving staff morale in the sector and a high level of satisfaction with the performance of chief executives. But beneath the surface lurks a worrying message about internal working practices in charities. 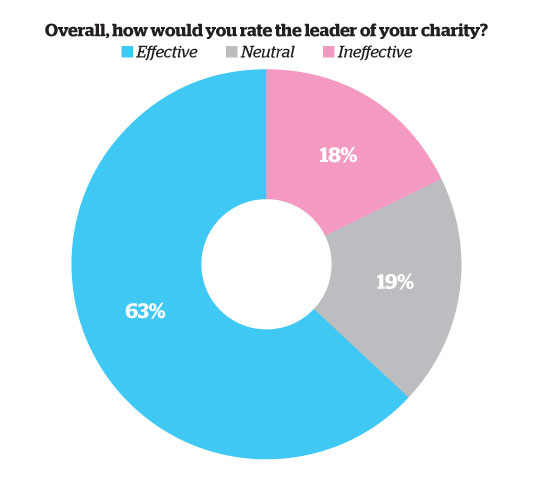 Chief executives are seen as effective by 63 per cent of their staff and as ineffective by only 18 per cent. Nearly two-thirds of respondents think the pay of their chief executive is about right, and 78 per cent think he or she is successful in championing the charity's cause. On the downside, only 46 per cent of respondents think that their chief executive is doing well at encouraging healthy working relationships across the charity and building an effective senior management team, and only 43 per cent think he or she is creating an organisation with effective working practices. 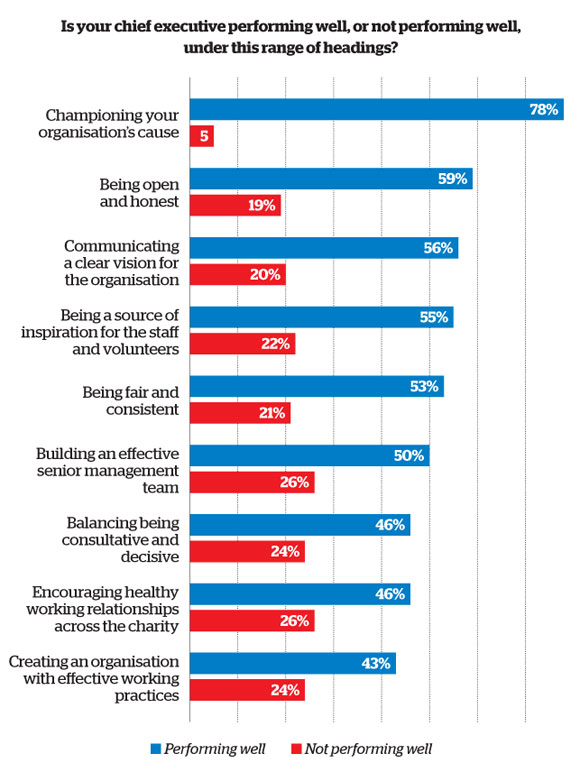 One might expect that creating healthy relationships and effective working practices would be highly valued by staff. In fact, staff consider them to be less important as leadership qualities than communicating a clear vision for the charity, championing the cause and being a source of inspiration for staff and volunteers.

"So what is this saying?" the report on the survey asks. "These results indicate that chief executives and staff are more focused on the external aspects of leadership than the internal elements. We think this matters, as our past research shows that these internal factors are crucial to maintaining staff satisfaction." To illustrate this point, the report reproduces data from last year's survey – not collected this time – that explored the relationship between healthy working relationships and staff satisfaction and retention. It found that in charities where relationships were thought to be unhealthy, people were more likely to be dissatisfied, insecure and planning to leave. 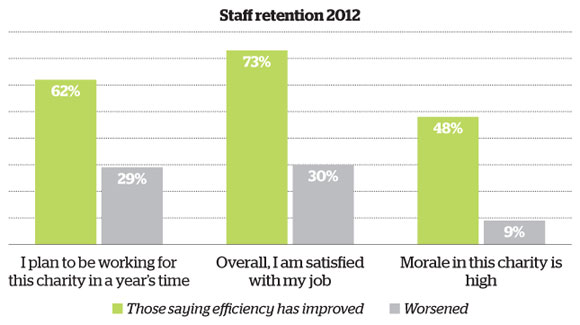 Taken together, these findings indicate that charities might be focusing on championing their causes to the detriment of creating organisations with effective working practices and encouraging healthy working relationships across the charity.

Like their chief executives, staff appear to be more focused on the external aspects of leadership than the internal elements, and non-urgent but vital organisational concerns might be losing out to urgent external priorities.

Given that staff can be a "critical audience", Frances Hurst, co-founder of Birdsong, says it is reassuring that a good majority of charity staff are happy with their leaders and believe they are paid "about right".

But she also warns of an "interesting challenge" for chief executives on the internal organisation of their charities.

"Unfortunately, it is quite common for charities to say that they don't have the resources to deal with internal issues on an ongoing basis," she says. "They tend to treat change as a project and then go back to the norm, whereas innovative organisations in other sectors see change as an ongoing role in the organisation."

"There is a contrast between how chief executives perform and what staff really want from their leaders," she says. "The first thing they need to do is to develop a clear vision that staff will find motivating and energising and that will enable everyone to pull in the same direction."

The year when morale perked up

This year's Charity Pulse survey paints a positive picture of working life in the sector as a sense of optimism returns, driven by greater job security and increased confidence in charities as employers. In recent years, the survey has charted the decline of charity workers' morale and job satisfaction, which sank to an all-time low in 2012 as the poor economic climate took its toll on the sector. But Frances Hurst of Birdsong Charity Consulting regards 2014 as "the year in which voluntary sector staff morale recovered". 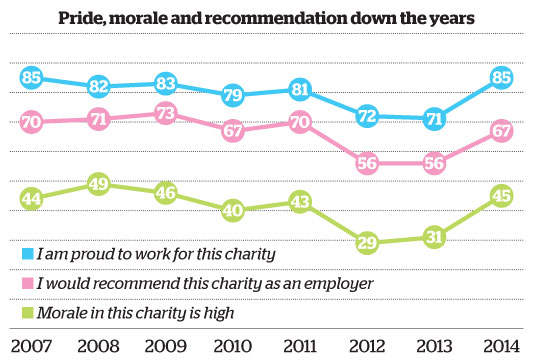 The proportion of employees who think that morale in their charity is high has increased by 14 percentage points in the past 12 months, from 31 per cent in 2013 to 45 per cent this year. This is the most significant increase in morale since the survey began in 2007. There has also been a similar recovery in staff pride in their organisations, which has returned to pre-downturn levels of 85 per cent. 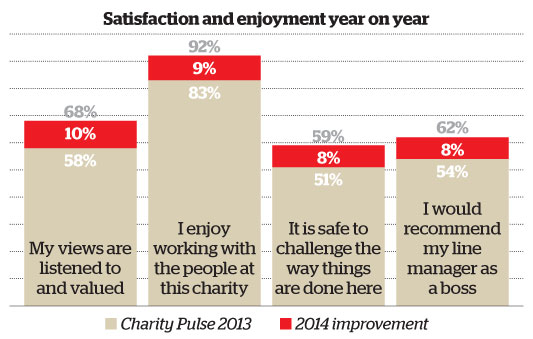 These improvements can be attributed to a number of factors, including the findings that 68 per cent of respondents think that their views are listened to and valued and a huge 92 per cent report that they enjoy working with their colleagues – the highest percentage in Charity Pulse's history. More staff – 59 per cent, a rise of eight percentage points from 2013 – also feel it is safe to "challenge the way things are done" in their charities.

Hurst believes satisfaction links directly to reduced threat of redundancy and greater job security: 49 per cent of respondents reported redundancies in the previous 12 months – the lowest figure in the past five years. 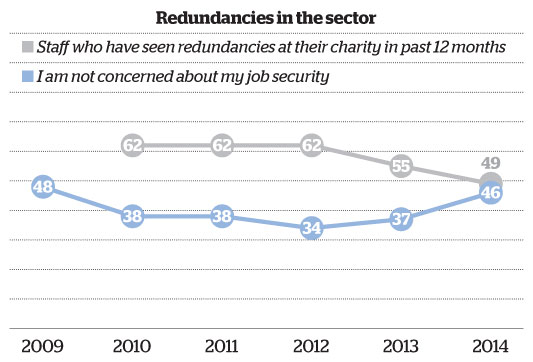 "The sense of optimism returning to the sector comes through loud and clear in the findings," Hurst says. "Increased job security is such a big thing, and this is backed up by people being more happy to speak up and challenge."

The survey also shows a continuing increase in people doing long hours, but an improvement in flexible working. 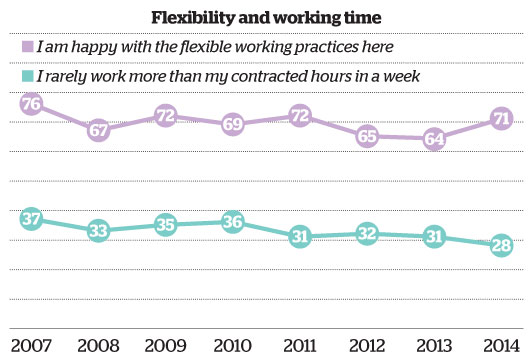 Should I stay or should I go?

The survey found that the three factors with the strongest effect on staff retention were: being listened to and valued; feeling appreciated; and being treated with fairness and respect. The less these factors were present, the more people intended to leave. 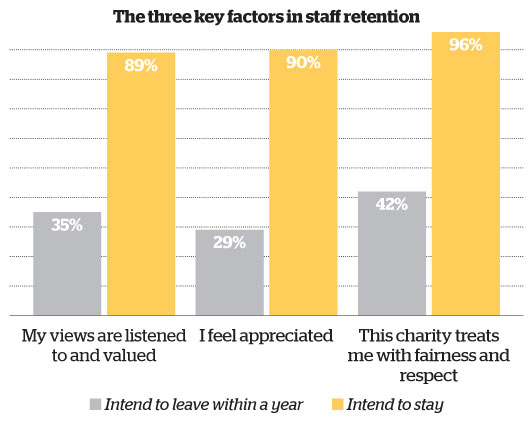 "These three areas matter," the report concludes. "Most people in the sector could tell you that pay is not the main motivator for charity staff. They could also tell you that it is not really about the hours worked or efficiency of processes – important though these things are.

"What this analysis suggests is that it's something more basic than that – something more human that makes the difference: really listening to staff when they tell you something important; thanking people for a job well done; and treating them like adults."

When respondents were asked what improvements would make their charities better places to work, responses ranged from "better communication" to "better office" and many comments around salary. The extent to which various factors featured in responses are represented in the word cloud at the top of this article. 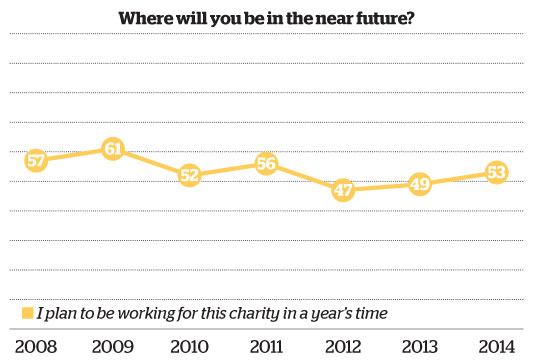 But there is not as great a variation between the peaks and troughs over the years as there is in other responses, and Hurst says this has been one of the most difficult trends to interpret.

"For example, when times are tough externally, the devil you know can feel like the best option, despite internal factors being less than ideal," she says. "But when external factors – such as the economy or the job market – become more positive, internal factors – such as fewer redundancies – are often improving as well. Both of these scenarios would result in the same answer being given on the questionnaire, but the motivation will be completely different."

She concludes: "Feeling listened to, valued and appreciated can be the difference between staying or leaving an organisation. The findings are stark. Above all, people want to be treated with fairness and respect."