Only a year after signs of a recovery in the sector's morale, the latest Charity Pulse survey finds the mood of the charity workforce is sinking. Stephen Cook reports on the latest figures and analysis

Last year it seemed that morale among charity staff had emerged from the slough of despond of the previous two years: the Charity Pulse survey in 2014 revealed the most significant increase in morale since the survey began in 2007 and suggested that an important corner had been turned.

This year, however, the picture is very different. Most of the key indicators have slipped back significantly, two of them are lower than they have ever been and it seems clear that the sector is going through a double dip in staff morale. The only bright spot is that a slightly smaller proportion of respondents reported redundancies at their charities in the past 12 months.

Frances Hurst of Birdsong Charity Consulting, which conducts the annual survey in partnership with Third Sector, says it is tempting to surmise that the cause of the second downturn is continuing financial pressure in the external world: previous surveys have indicated that internal and external areas are connected, in that organisational health can slip down the agenda when leaders are under pressure from outside events.

But outside events were not mentioned in respondents' comments, she says, and when respondents were asked about their priorities for change, internal themes predominated, such as general wellbeing or managers taking time to be more considerate of staff. A special focus on wellbeing in this year's survey revealed the value that respondents placed on a supportive culture at work, mental and physical health and mindfulness.

Of the 46 questions that are repeated each year, none this year were scored more highly by respondents than last year (see chart, above); 46 per cent received the same scores and 54 per cent were scored lower. In general, a smaller proportion of respondents than in 2014 felt well informed about what was going on in their charities, or listened to and valued. They had less confidence in senior management and were less satisfied with the support they received at work. 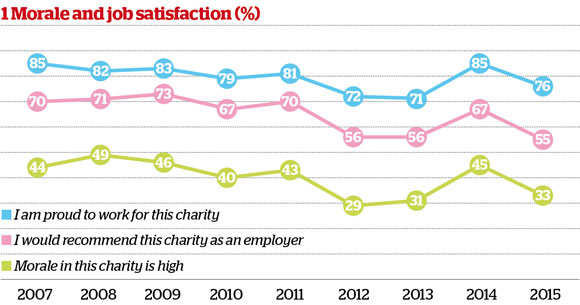 The figures on morale and job satisfaction (graph 1) showed some of the steepest falls: the proportion who would recommend their charity as an employer was down to its lowest level of 55 per cent, one percentage point lower than in 2012 and 2013. 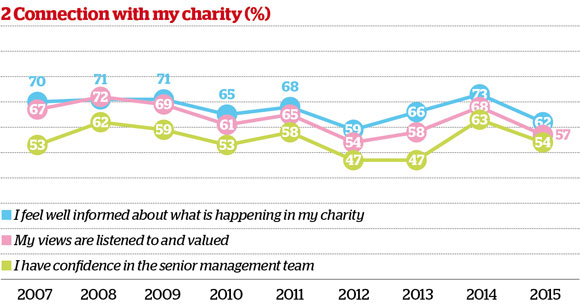 The fall in feelings of connection with the charity (graph 2) was less steep. 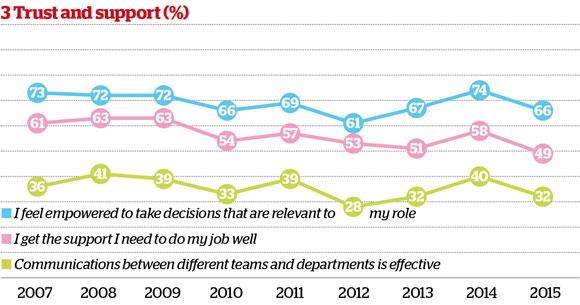 But respondents' agreement with the phrase "I get the support I need to do my job well" (graph 3) was also at its lowest level - 49 per cent, compared with 51 per cent in 2013. 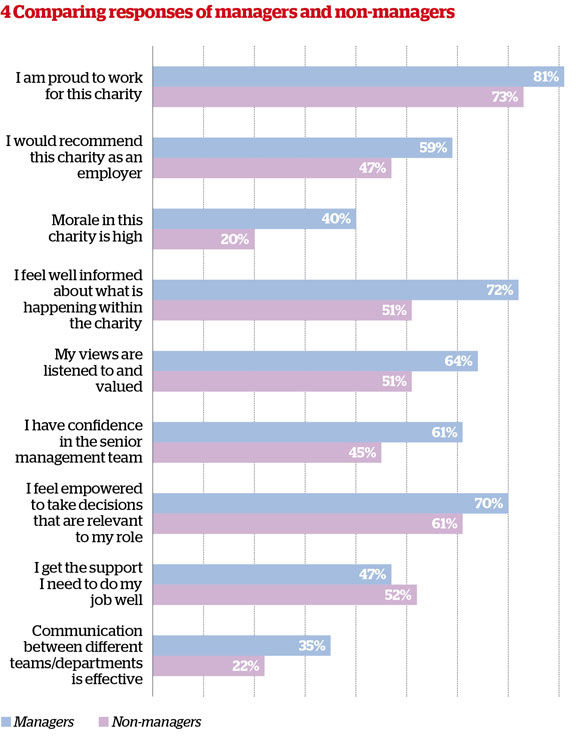 To explore further what factors might be causing the falls in satisfaction, Birdsong compared how non-managers and managers responded to nine key questions (chart 4). It found that non-managers were significantly less satisfied with their jobs, except in the sphere of receiving enough support to do their jobs well.

The biggest differences between the two groups were in feeling that morale in their charity was high (20 per cent of non-managers, compared with 40 per cent of managers), feeling well informed about what is happening in the charity (51 and 72 per cent respectively) and having confidence in the senior management team (45 and 61 per cent.)

"The foot soldiers are leading the downward trend in morale," says Hurst. "It might be that managers feel more supported because they report directly to leaders, but further down the organisation people feel less so.

"The key message is that it's critical that charities bring people with them. Junior staff and those who work remotely feel most disconnected. There's a tendency to rely on online communication, but perhaps it's time for communication to be more up front and transparent.

"That's part of whether the organisation is trusted and leads to a more positive view of the leadership team. Most people working in charities are passionate about the cause, but factors such as this can be undermining. People won't go the extra mile if they don't feel valued personally."

Wellbeing is alive and well, but is all as well as it could be?

This year's Charity Pulse asked questions about wellbeing at work, which is increasingly being investigated and measured in the world of employment. It found that 95 per cent of charity staff respondents believed their employers had a role in maintaining their wellbeing. 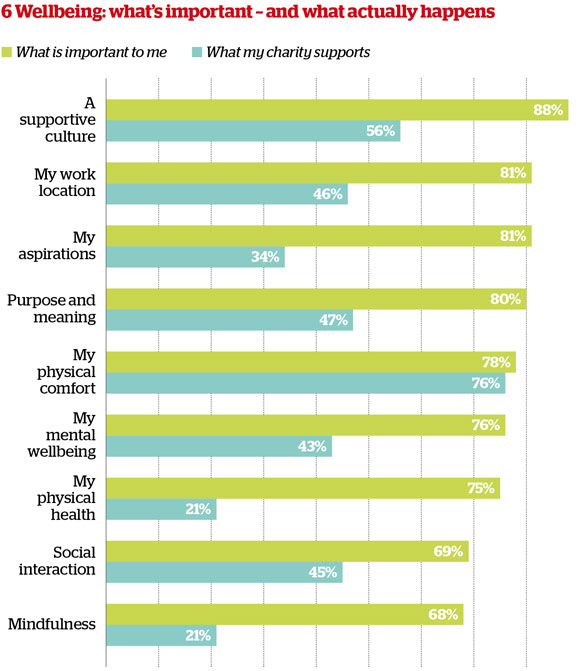 The survey asked about nine elements of wellbeing, comparing what was important to people with what was actually provided at their workplace (chart 6). This showed that expectations were being met in one area only – physical comfort.

The biggest gap between what was important to people and what they perceived to be the reality was of 54 percentage points in "my physical health". The second biggest gap, of 47 percentage points, related to mindfulness – the concept with Buddhist origins of enhancing awareness of ourselves and the world around us. 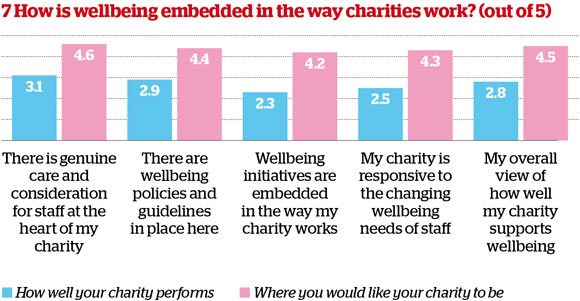 Questions about how wellbeing was embedded in the way charities work revealed that respondents gave their charities 2.8 stars out of a possible 5 (chart 7) and an "aspirational rating" of 4.5. "Charities are doing best in genuinely caring for their staff and least well at embedding wellbeing initiatives in the way they work," the report says. 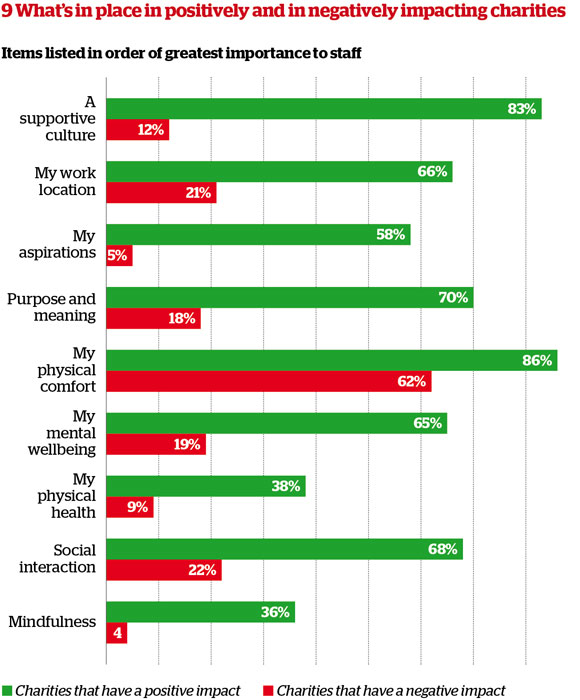 The survey then looked at the factors that respondents in the "positive" and "negative" segments said were present in their organisations, producing the comparison in graph 9.

The report says the most striking difference between the two groups was in the provision of a supportive organisational culture: "This is the aspect of wellbeing that is most important to staff, yet only 12 per cent of individuals in negatively impacting charities feel this is present, compared with 83 per cent in positively impacting ones."

The report also maps certain organisational and personal questions from the main survey against respondents' assessments of whether their charities had a positive or negative effect on wellbeing. "This reveals there are staff with a good understanding of what their charity wants to achieve and high levels of belief in their cause who are working for organisations that are having a negative impact on their wellbeing," the report concludes.

To see this and previous years' Charity Pulse reports, go to www.bird-song.co.uk