The latest results show that senior teams are losing respect, while staff are feeling less appreciated at work

Overall, sernior teams are losing respect: 30 per cent of respondents say they are not effective, a rise of 11 percentage points in 12 months. The figures are higher in medium-sized and larger charities.

The percentage of people who feel unsafe in challenging their leaders is up to 34 per cent from 23 per cent last year. Charity leaders are also perceived to be getting out of touch: 38 per cent of respondents believe this, compared with 30 per cent in 2011. 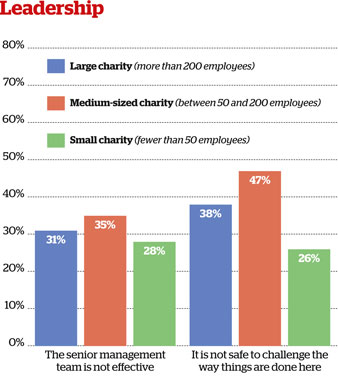 Some of the biggest year-on-year fails concern appreciation and respect: overall, 55 per cent of respondents feel appreciated at work, compared with 64 per cent last year. 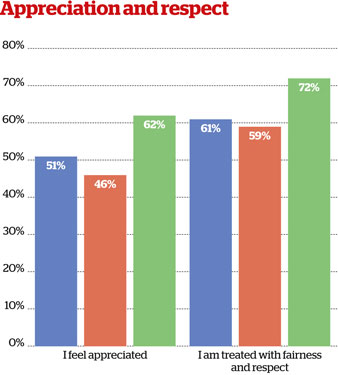 Relationships with bosses tend to be among the main reasons why respondents look for a new job: 21 per cent of them said they planned to move because of their boss. Nevertheless, 57 per cent would recommend their line manager as a boss, while 17 per cent are ambivalent and 26 per cent definitely would not. Only 19 per cent of respondents who are unhappy with their boss plan to be working for their charity in a year.

- See how charity morale has dropped

- See how the good charities are getting better