The annual poll shows that the morale of charity staff has plunged over the past year. Annette Rawstrone interprets the figures and notes how good employers are improving while the bad get worse

Morale is at an all-time low and the UK charity sector is not a happy place to work at the moment, according to the annual Charity Pulse survey conducted by Third Sector and Birdsong Charity Consulting.

The percentage of respondents who think morale in their charity is high has plummeted 14 percentage points, from 43 per cent in 2011 to only 29 per cent this year. It is by far the biggest fall in morale since the survey began in 2007.

Frances Hurst, co-founder of Birdsong Charity Consulting, which analysed the survey responses, is surprised by the figures. "We don't normally see changes of this size," she says. "It is typical to have a change of a few percentage points, but this year it is quite significant, particularly with staff morale.

"Our feeling is that we are now seeing in charities what other sectors have experienced over the past few years since the economic downturn." 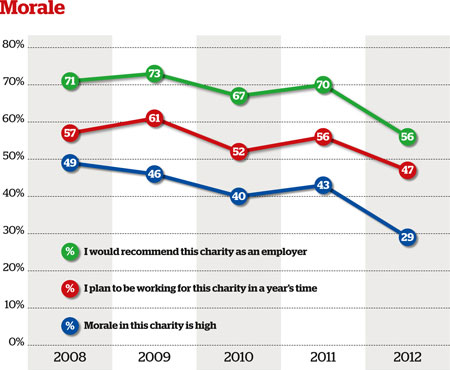 Hurst links the findings to the demoralising effect of absorbing redundancies over consecutive years - in the past year, 62 per cent of respondents say there have been redundancies at their charities, the same level as in 2011 and 2010.

"At first, staff rationalise that the organisation is getting rid of dead wood, but the longer it goes on then the closer to home it comes and they start to see good people leave," says Hurst. "Staff become less keen to make themselves stand out and challenge the way things are being done, which then leads to negative spirits."

The fall in the proportion of people who would recommend their charities as employers is also likely to be linked to the drop in morale. This has fallen from 70 per cent in 2011 to 56 per cent, which is, again, a new low.

Charity staff are more prepared to face an uncertain job market than at any time since the downturn began. Just under half of respondents (47 per cent) say they are planning to be working for their current charity in a year's time. 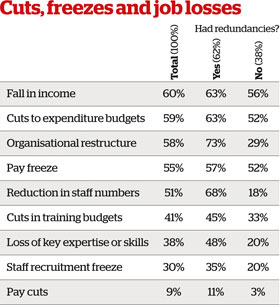 This table (right) compares respondents' accounts of events in charities that have and have not made redundancies in the past 12 months.

Even staff in organisations where there have not been redundancies report that their charities have experienced a fall in income (56 per cent, compared with 63 per cent in charities where redundancies have been made).

- Read our results on charity leadership

- See how the good charities are getting better