The economy might be struggling, but Barnardo's and the Salvation Army are planning a massive increase in their retail operations. Helen Barrett finds out why these two charity shop chains are expanding despite the gloom

Opinion is divided on whether charity shops do well during tough economic times. Shoppers might be seeking bargains, but they also demand low prices and are less likely to donate goods. Rents are low, but that's because high-street footfall is down.

But evidence suggests charity shops have performed reasonably well in recent months. According to the Association of Charity Shops, turnover grew by 2.4 per cent between April and June 2010 and profits rose by 9 per cent in the same period. Warren Alexander, the chief executive of the association, describes the results as steady and above inflation - but not dramatic.

"It's a very mixed picture," he says. "Much depends on where charities trade and how much capacity they have. Some chains are doing much better than others."

Two charities in particular have had a very good recession, despite market uncertainty. The profits of the retail operations of Barnardo's and the Salvation Army have soared in recent years, and both charities have audacious plans to expand. Barnardo's intends to open 67 shops this financial year and another 60 next year. The Salvation Army wants to open 50 more shops in 2010/11 and another 50 the year after.

The two charities developed their expansion strategies before the downturn and use some of the same tactics. Both found ways to turn the economic gloom to their advantage and both explored creative and entrepreneurial ways to sell second-hand goods. At the same time, they both reduced overheads and worked on new ways to tackle a dearth of donations. 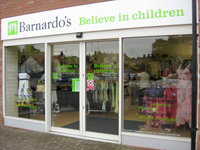 The strategy adopted by Barnardo's began with a review held in 2006, before the downturn, to identify which shops were profitable and where volunteers and donations were easy to find. "Our expansion programme came about on the back of that," says Gerard Cousins, the charity's director of retail and trading. "It told us what worked and where we should open stores."

He says Barnardo's has focused on opening shops in areas that enjoy high footfall and offer little competition from other charity retailers. It also closed shops that performed badly - six last year, but only when leases expired.

The economic downturn has led to a glut of empty shops, and landlords have responded by offering incentives. "It's a buyer's market and you can pretty much name your terms," says Cousins. "Charities are respected because they have no debt and are virtually guaranteed to pay the rent. And rents are lower than before, which makes retail extremely appealing for those with the wherewithal to open shops."

Compared with Barnardo's, the Salvation Army's retail operation of 103 shops is small, but the charity is equally bullish about its expansion plans. In 2009/10 it opened 24 shops and aims to have 100 more in business by the close of the 2011/12 financial year.

Its trading arm, the Salvation Army Trading Company, runs a textile recycling operation and the shops on behalf of the charity. It is the largest clothing collection and recycling company in the UK, but its managing director, Trevor Caffull, says the chain is underdeveloped. "We're not maximising the potential and the brand, so we're in a position to expand," he says.

Caffull says the economic downturn provided the right conditions for expansion for the first time in the company's 16-year history. "Deals on retail units are available that would previously have been unheard of," he says.

Like Barnardo's, the Salvation Army Trading Company expanded after an overhaul of its business model, which took place in 2005/06. Until then, donations were sent to a central sorting station that redistributed goods to different 'grades' of shop. The intention of this approach was to direct the right product to the right shop at the right time, but it proved expensive.

"It was good in theory, but it added to massive central overheads without ultimately delivering extra sales," says Caffull.

In response, the company abandoned central sorting and instead delegated decisions about sorting and pricing to shop managers. This helped shops to compete locally - which, in turn, boosted profits. "They could position themselves to take account of local competition, and the sorting is largely done by volunteers anyway," says Caffull. Some central distribution remains, which Caffull says has helped to protect shops from falling donations during the recession.

Barnardo's, meanwhile, has found further success with niche retailing: 17 of its new shops will sell only children's wear after a pilot shop at West Bridgford, near Nottingham, performed well last year. But perhaps the charity's boldest move was its new brand Take 2 - these are second-hand clothes shops without Barnardo's branding, charging higher prices. Pilot Take 2 shops in Liverpool and Aberdeen have performed well, says Cousins, and a further 10 branches will open soon. "We concluded that customers expect charity shop prices to be low, usually below £5. But with Take 2, we can charge more," he says. 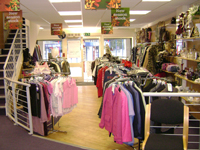 Charity shops can collect Gift Aid on donated items, although the administrative requirements of HM Revenue & Customs are cumbersome and costly. Barnardo's has collected Gift Aid on donated stock for three years, which brought in £1.6m last year, but the charity must ask each donor to confirm they are a UK taxpayer and then write to the donor when items are sold to ask if it can claim the relief.

Cousins concedes that the cost is high, but says it's worth it, pointing out that only 0.3 per cent of donors say no to Gift Aid. The Salvation Army, however, has decided against Gift Aid collection because the administrative costs are too high.

But the Salvation Army is trying other ways to stimulate donations and reduce its shops' dependency on central sorting. Large employers set up donation collection points and the company's re:bag scheme, currently operating in 20 shops, is soon to be rolled out across the chain. In the scheme, a bag costs 99p, shoppers receive a £2 money-off voucher if they return it full of donations, and they can keep the bag to fill up again. Caffull says 35 per cent of bags sold result in donated goods being returned to shops. He adds that attention to detail has also contributed to keeping costs down. Ten months ago, the charity put the procurement of everyday supplies, such as price tags and carrier bags, out to tender. The move, he says, has brought significant savings.

For its next move, Barnardo's is turning its attention to reducing its spending on 'bag trawling' - soliciting household donations by putting bags through letterboxes. At the moment, the charity uses local van-hire services to do this, but the system is expensive.

"We do need to find other ways to acquire stock," says Cousins. "It is not particularly productive for us because there is so much competition."

Despite their success, both Cousins and Caffull concede that replenishing stock continues to be one of the toughest challenges. Alexander of the Association of Charity Shops agrees.

"It's a critical factor for charity shops," he says. "Most of our members are worried, and a number are concerned about how they will generate new stock in the long term.

"But those who will tough it out and be really successful will be those who know how to drive business and are creative about getting it."