The Children’s Society has created an animation to "lift the lid on the devastating impact of debt on children’s lives". The colourful graphics explain the worries that children face when their families are in serious debt, such as anxiety when debt collectors come knocking and the prospect of losing their home. These are accompanied by statistics, such as the fact that repayments have forced nine out of 10 parents in problem debt to cut back on essential items for their children within the last year. There are also quotes from parents and children that bring the issue to life.

At the end of the animation, viewers are asked to add a brick to a virtual wall of support, highlighting the need to protect children from the effects of debt. They can either choose a pre-prepared message – for example, "I'm on the side of children; protect them from the effects of debt" – or compose their own. They are also invited to share the fact that they have participated on Twitter or Facebook. 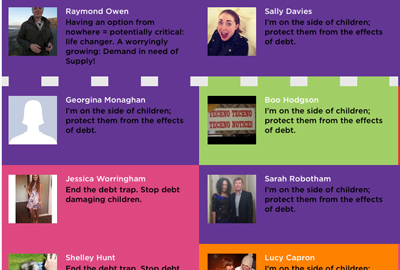 What did the charity want to achieve?

The focus of the campaign was to raise awareness of one of the less-discussed aspects of the well-known social problem of debt. "We wanted to take supporters on a journey," said Jennifer Walters, director of communications at the charity. "To take them into the family and show them what can happen. If there is an illness or a parent loses their job, things can spiral out of control"

The Children’s Society has found a really accessible way to present the findings of its research to a wider audience. This could easily have come across as critical of parents who find themselves in debt, but it takes a supportive tone and is careful to point out that, despite parents’ best efforts to build a good life for their families, unforeseen circumstances can have a devastating effect. The wall of support is also an interesting slant on the traditional petition.