Recent research has claimed that charity donations are falling and many commentators have felt that the scale of the drop was not in line with their experience. At MacIntyre Hudson, we are seeing clients with grant and contract reductions but donations seem to be holding up. However, with the latest Charity Commission quarterly statistics available, it is worth taking some time to look in more depth at the health of the sector as a whole.

The graph below shows the total income and expenditure reported in each quarter and it can be seen that there has been a continual increase over the past year. However, the rate of growth has slowed in the last quarter. Total sector income has reached £58.9bn, a rise of £3.2bn (5.5 per cent) over a year ago. 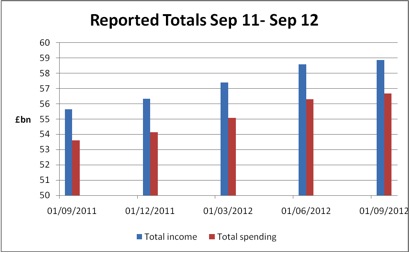 Reserves on the rise

The sector can take credit for good financial control with the surplus before investment gains remaining steady at 3.7 per cent. The level of investment gains is decreasing now that the stock market gains of 2009/10 are replaced by the recent flat market. Even so, the sector is still seeing the overall level of reserves rising by a reported £5.8bn in the most recent quarter.

Over the year the sector has seen an increase in income of £3.2bn. The table below shows how the income is broken down across the main headings in the Statement of Recommended Practice, or Sorp, and the percentage change for the sector and for charities with an income of more than £5m).

The largest value increase is in charitable activity, where charities are being paid to provide services. This shows an overall rise of 5.5 per cent over the past year and shows that, so far, charities are managing to weather the storm. However, the level of growth over the past quarter had dropped to 3.5 per cent. Voluntary income shows a similar picture with growth dropping to 0.5 per cent in the last quarter. Investment income had seen high growth in the March and June quarters but again the last quarter saw the increase fall back to 1.2 per cent. Overall, income grew by 0.5 per cent in the past quarter so it may be that the figures to the end of December will show a decrease.

While the overall numbers of charities continue to grow at a modest pace (1,124 over the past 12 months) the balance of resources continues to flow towards the larger charities (those with an annual income of more than £5m). The graph below shows that they account for more than two-thirds of sector income. 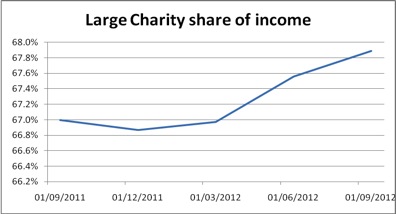 The statistics are useful for identifying trends and analysing the performance of the sector as a whole. The ability to focus on different sizes of charity and on particular issues as reported under Sorp also provides the opportunity to delve further into specific issues. For example, at Macintyre Hudson we use the register as the wider universe for benchmarking and then include data from our subset of relevant charities. However, it is helpful to take a step back and look at the big picture as set out by the main points above: the sector is growing and appears to remain in good health.