The last article, on the September Charity Commission statistics, prompted some disagreement because the backward-looking information it reported seemed to be at odds with the more recent, survey-based points of view. The value of the Charity Commission data is that it is comprehensive and consistent over time, although it cannot avoid being historical because it is based on published accounts. A close look at the results of the latest quarter does seem to indicate that the growth might now have peaked.

The graph below shows the total income and expenditure reported in each quarter. It shows that, although both income and expenditure grew in the first two quarters as a result of additions to the register – but also because of reported growth by existing constituents – the rate of growth slowed in the third quarter and income and spending both declined in the most recent quarter. Total sector income has reached £58.7bn, a rise of £2.4bn (4.3 per cent) over a year ago, but a fall of £130m in the most recent quarter. 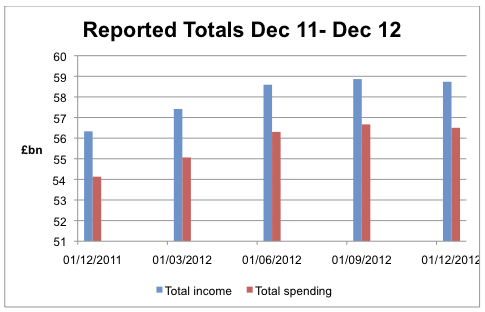 Despite the fall in total income, total expenditure dropped by more, leading to a slight improvement in the surplus before investment gains at 3.8 per cent. This can be expected to become more volatile in future, but for the time being charities are remaining remarkably consistent. The level of investment gains continues to decline now that the stock market gains of 2009/10 have been succeeded by a flat market. Even so, the sector is still seeing contributions to reserves rising by a reported £4.5bn in the most recent quarter.

Over the year, the sector's income has increased by £2.4bn. The following table shows how that increase is shared out in percentage terms. Larger charities have a higher share arising from charitable activity, presumably because of contract income and a bigger share from investment income.

The table below shows how the income is broken down across the main Statement of Recommended Practice headings, the change over the past quarter and the annual comparisons for the sector and large charities (>£5m).

Charitable activity, where charities are being paid to provide services, is the largest activity by value but this figure declined over the past quarter. It is too early to be sure that this is the start of a new trend, but it will be closely watched in future. Growth in voluntary income has also slowed, being only just positive for the last quarter, while investment and other income saw little change. The only bright light was the 3.2 per cent improvement in trading income in the quarter.

The results from the register provide some justification for the points of view expressed about the condition of the sector – income might have peaked and income from contracts has fallen by the largest amount. However, the changes are still small and the sector has made corresponding reductions in expenditure. It is not bankrupt yet.