Chris Harris: a return to the upward trend

The Charity Commission figures from the most recent quarter show a return to the upward trend in income and expenditure by charities that had been occurring for a number of years, with the previous quarter now seemingly an aberration. Although these results are often up to a year old, depending on how promptly the charities are filing their results with the commission, the picture would appear to be more positive than expected given the struggles of the wider economy. 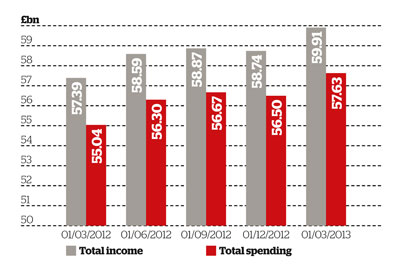 The net income figure before investment gains kept pace with the growth at a steady 3.8 per cent. This remains a remarkably consistent record. The level of investment gains recovered in the quarter, leading to contributions to reserves rising by a reported £5.5bn on the same quarter last year. Overall reserves are reported as £154.5bn, although there do appear to be some inconsistencies in the data because the rises do not necessarily match net reported income and expenditure.

Over the year the sector has seen an increase in income of £2.5bn. The following table shows how that increase is made up. The recovery of voluntary income and the continued growth of trading income mean a lower share for charitable activity and investment income. 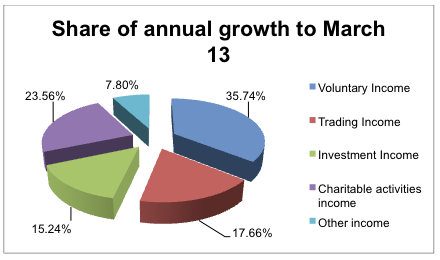 The table below shows how the income is broken down across the main Statement of Recommended Practice headings, the change over the past quarter and the annual comparisons for the sector and large charities (>£5m).

Charitable activity, where charities are being paid to provide services, is the largest activity by value and has recovered after a decline over the past quarter. However, this is outpaced by the growth in voluntary income, which achieved 5 per cent over the year. Investment and trading income also continue to grow at above-inflation levels. Large charities have seen better than average growth in every category, but charities in the £500k to £5m group have been hit particularly hard, with overall income falling by £220m despite a net additional 49 charities joining this group. The majority of the reduction was in the charitable activity heading (£216m).

The results from the register look like a return to overall trend after some hesitation in the past quarter. The sector is receiving more income, spending more on charitable activities and yet still managing to maintain a steady increase in reserves. How long will it continue to buck the wider economic trend?