The fatal August airshow tragedy has prompted the creation of a charitable appeal. Andy Hillier reports

The Shoreham Airshow crash on 22 August left at least 11 people dead and 14 people injured, including the pilot. Many of those killed or injured were local people from the Sussex area who were going about their daily business when the vintage Hawker Hunter jet failed to complete a loop and crashed onto the A27. 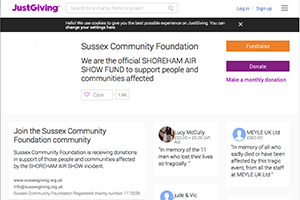 The disaster shocked the local community and has led to a number of fundraising appeals being launched, including an official Shoreham Airshow Fund that is administered by the Sussex Community Foundation, which raises money for local charities. In the first 10 days of the appeal more than £50,000 was raised for the fund through a JustGiving fundraising page (above) and telephone, text and postal donations.

Kevin Richmond, chief executive of the Sussex Community Foundation, says that the planning for a disaster appeal began more than a year ago. "When there were major floods across the country in 2013, community foundations took the lead," he says. "In response, our trustees thought that this could happen in Sussex and we needed to do some planning."

The foundation spoke to local authorities and other organisations, including the Sussex Resilience Forum, which brings together various government agencies and the voluntary sector, to establish what role it should play in the event of a crisis. It was agreed that the foundation was best placed to run an appeal fund.

This meant it had done the groundwork for setting up such a fund and was able to respond quickly to the jet crash. "On the Monday after the crash we got a call from West Sussex County Council asking for help because it was being offered money," says Richmond. "The fund was created at once and a press release was put out jointly with the local authorities."

Richmond says that although a range of individuals and organisations associated with the crash victims have set up their own appeals, it was felt that an official, trusted appeal fund was also needed.

Organisations that have contributed to the fund include the County Oak pub in Hollingbury, which raised almost £4,500 by holding a series of events over one weekend, and Morrisons supermarket, which raised about £9,000 through eight local stores. A Shoreham resident raised £525 by staging a music event at a local bar. Richmond says: "There have been lots of big and small events and a whole range of spontaneous fundraising. People feel terrible for those affected and want to help. It's very moving."

At the start of September, the foundation was still in the process of creating a grants panel to decide how to allocate the money; Richmond says that panel will include trustees of the foundation, community representatives and representatives of statutory agencies. The foundation has been talking to police family liaison officers and the advisory services, he says, to raise awareness of the fund and encourage the people they are supporting to apply: "We're going to have a quick-response process because the immediate priority is to support those in grief. That's why people are giving - they want to help those families."

Richmond expects that the fund will get requests for help with funeral costs and for financial assistance for families that have lost their main earners. No upper limit has yet been put on the amount of money it will allocate to applicants, but Richmond says a decision will be made in due course.

The local authorities involved in the appeal have agreed to pay the costs of administering the fund, up to a certain limit, so that most of the money raised can go to those affected. Richmond says: "The fund will be open as long as there are donations and there is need. One of the things about community foundations is that we can provide longevity."