Concern Worldwide is promoting downloads of its Wabby Wabbo Christmas single, with all proceeds from sales of the song between 18 December and Christmas Eve going to the organisation. The single has been put together in association with the computer game firm PopCap Games.

Who sings the song?

The hip-hop single features Crazy Dave, also known as Cray-Z, from PopCap Games’ videogame Plants vs. Zombies. Signed to the Ded Jam label, Crazy Dave, has already racked up more than 465,000 views of the music video for Wabby Wabbo on YouTube. 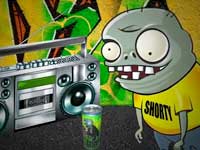 Where can people buy it?

The Wabby Wabbo single is available to download on iTunes for 79p, approximately 55p of which will be given to Concern Worldwide after partner fees and other third-party operating costs are deducted.

Why did Concern Worldwide do it?

Richard Dixon, director of public affairs at Concern Worldwide said: "We’re always open to new ways to raise funds for and awareness of our work. What could be better than this game?"

The race for the Christmas number one in the charts is always a popular question in the media and among the public, and the charity does well to tap into this enthusiasm rather than launching a single at another time of year. Using a computer game character is an interesting move away from the usual celebrity singer tie-ups and will extend the single’s appeal to a new audience of gamers.