How to connect with donors? Long story

Susannah Birkwood reviews Storytelling Can Change the World by Ken Burnett, which argues that storytelling is the best way for fundraisers to connect with supporters 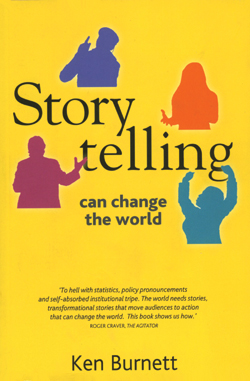 Once upon a time, there was a charity fundraising consultant called Ken. He believed that storytelling could change the world – not only in fundraising, but also in big business and education – so he wrote a book on the subject.

The main premise of Storytelling Can Change the World is that the ability to tell a good story is the most important skill for any would-be influencer, but is often neglected. Ken Burnett argues – in a book that sometimes takes 200 words to express what could be said in 10 – that a story is the ideal medium for fundraisers to connect with potential supporters.

Practical tips for charities are hard to find among the wealth of stories, but there are a few. Charities can be even worse than businesses at treating their audience with respect, Burnett says, citing how many charities refer to former supporters as "lapsed donors". This is bad, he says, because it will lead to charities thinking and writing about ex-supporters in negative terms.

Burnett also includes tips on how to write thank-you messages to supporters: send them within 24 hours, use the word "you" a lot and let people know that you know them by making use of information you have on file about them.

Burnett also says that charities should hold their hands up when they get things wrong – as did the US not-for-profit organisation charity:water, which cemented its relationship with supporters by telling the story of its failed attempt to drill a well in a remote African village.

The main weakness of the book is that it tries to be something for everyone and does not focus specifically on the charity sector. Burnett runs the risk of alienating his most logical audience without offering enough to those in other fields.

Storytelling Can Change the World, by Ken Burnett, published by the White Lion Press, £14.95 (paperback)