Debra Allcock Tyler: 'As we hurtle towards the next election, charities need to show the whole squid'

Real progress is made when we know the reality of what we're dealing with; so if a party's policies are rubbery, ugly and inedible then we must tell them so, writes our columnist 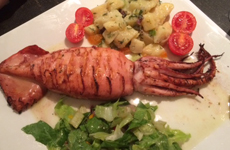 My partner Andy and I recently dined out while on holiday abroad. Andy wasn't particularly hungry, so he decided to have the calamari. We expected elegantly arranged, perfectly sliced rings of a small squid, deep fried in a lightly spiced tempura batter. The picture to the right is what actually arrived. My response was "eeuuuuwww!" His was: "You have got to be squidding me." (Not really.)

We contemplated the offering in some dismay because it bore a disturbing resemblance to something out of Dr Who. I proposed sending it back because it wasn't what he'd ordered. Andy, rightly, said: "But I did order it. It's not what I expected, but it is obviously how they serve calamari here." So he ate it. Well, most of it. About half. OK, two tentacles and a third of the main body if you're going to be pedantic. He is now never allowed to kiss me again. Ever.

Which brings us back to the UK and the comedy of errors that is our charities ministerial appointments. When I looked up the new chap, Rob Wilson, the first thing I read was that he didn't think charities should campaign. Here we go again, I thought. Why do so many politicians completely misunderstand what charities do and why they do it?

And then it came to me. Have we conditioned modern society to forget the reality of things? For example, who really, consciously, contemplates the fact that the thing on our plate that is called a lamb chop is actually part of the body of a once living baby sheep? I suspect many of us don't always associate what we put in our mouths with its real origins. And I wonder if, in our desire to communicate the positive aspects of our activities to MPs and councillors in order to win their support and funding, we have a tendency to batter the facts to make them more palatable?

Sure, if you tell a politician that their policies are rubbery, ugly and inedible, like the squid, they get terribly offended. But real problems arise when they believe that the light, easy-to-eat dish we've offered up is the reality.

Perhaps we should show them the inelegant truth: that real progress is made when we know the reality of what we're dealing with. Oxfam was right to point out that government policies were not only failing to tackle the issue of child poverty, but were in fact exacerbating it. It highlighted the issue in its stark reality and didn't sugar-coat it. That was unpopular with government, but it needed to be said, whether it was what the government had ordered or not.

As we hurtle towards the next general election, it seems to me critically important that we are absolutely clear (and vocal) about the problems and challenges our beneficiaries face and which national or local political policies are going to make them worse, even if it is unpalatable. We need to show them the whole squid.