The charity is hoping that its first national digital campaign, launched this week, will raise awareness of epidermolysis bullosa. At the heart of the campaign is a Facebook app featuring a moving photo of a young boy. On top of his torso is a panel featuring the words "Want to know what it’s like to be a parent of a child with EB?" and the option to peel the panel back. Underneath are blisters, taken from photographs of real-life EB sufferers.

The child informs us that "EB is a blistering skin condition. When my dressings are changed it can peel away the skin too." 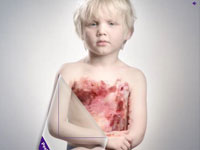 The campaign marks the beginning of EB Awareness Week (25-31 October), but will continue to run as part of Debra’s ongoing awareness drive.

The user is then invited to donate directly, share the app, find out more about the charity by visiting its website, learn how it supports families and individuals living with EB and read about its pioneering research.

Why is the charity doing this?

Victoria Field, communications manager at Debra, says of the campaign: "The main aim is to raise awareness of this condition. We want people to share knowledge about EB, particularly among healthcare professionals and teachers who might not know about it.

"It is a lifelong and incurable condition. We choose the ‘Peel’ option because we wanted people to engage with it and realise that parents have to peel off their children’s dressings each day."

The app was created pro bono by communications agency Publicis.

This simple but hugely effective app allows the viewer to understand what EB is and how severe it can be. The image says a thousand words about how painful and life-affecting the condition can be. The request to share, without an option to donate, might encourage more people to fulfil the charity’s aim to raise awareness of EB.