A Scottish charity has launched a social media "bot" to help dispel myths about the causes of homelessness among young people.

Cyrenians created the Facebook Messenger bot, named Alex, to complement a survey it commissioned of 1,015 adults in Scotland. According to the survey, 40 per cent of Scots believe that homelessness among young people occurs either through personal choice or a refusal to accept assistance.

The survey results say that 15 per cent of Scots believe young people are homeless because of personal choice and 25 per cent because they refuse to accept help from family, friends or the state.

According to the survey, 85 per cent believe a rift or argument with family is the main cause of homelessness and 59 per cent cite a lack of affordable housing; 54 per cent and 64 per cent blame drug use and alcohol consumption respectively.

Visitors to Ask Alex can ask questions they might not feel comfortable asking in public while learning about homelessness and the prevalence of conflict in the home. Alex is a combination of real-life cases and information. Cyrenians hopes the bot will help to break down barriers with those living on the streets.

Questions that are already built into the programme include "where do you sleep at night?", "why don’t you get a job?", "why don’t you stay with friends?" and "why are you homeless?" Visitors are also invited to ask their own questions, although it took three attempts before Alex understood one of Third Sector’s queries: 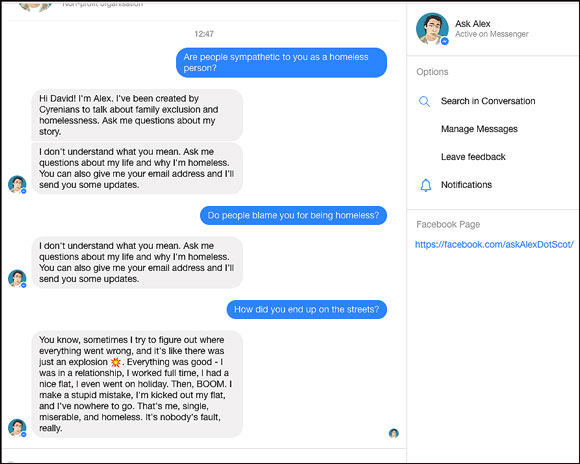 Carrie Webb, communications officer at the charity, says that at this stage the questions need to be more direct while the bot is developed.

"Each question needs intent rather than being a general one about homelessness," Webb tells Third Sector. "The bot is based on neurolinguistic programmming and requires more simple questions."

Webb says that Ask Alex, which is in a test phase, will be upgraded to become more receptive to different types of questions. It will be helped by the data gathered by the charity during the first week, in which the bot attracted about 120 visitors. With planned Facebook advertising imminent, Cyrenians expects the number of visitors to the bot to increase sharply.

Speaking about the launch, Ewan Aitken, chief executive of Cyrenians, says: "We need the public to understand that young people can be homeless for any number of reasons that are out of their control. The launch of Alex is a massive step towards making that change. If people find this a useful way to understand more, we will introduce similar technology to support our front-line service work with those at risk of homelessness or dealing with conflict at home.

"Users can ask Alex questions about how he ended up in his situation, get to know him a little and even find out how they too can help a young homeless person with just a small gesture of kindness."

Alex has also spoken about the launch: "A few months back, I spent a night on the streets, the scariest night of my life. Right now I stay in a bed & breakfast in Edinburgh. I have a roof over my head, but it's not a home. Not even close.

"I really struggled to get my life back on a positive path. Luckily for me Cyrenians was able to provide me with the help and support I needed to turn things around. I'm still on that journey and things are getting better, but I know a lot of people who haven’t been so fortunate."