Digital campaign: Girlguiding urges young women to get out and vote

Girlguiding has today launched a campaign to get young women to vote in next month’s general election and to drive sexism out of politics.

The UK charity for girls and young women has launched the initiative, backed by a social media campaign, because of concerns over what it calls the "continual objectification of female politicians", highlighted recently by the "Legs-it" headline about a meeting between the Prime Minister Theresa May and the Scottish First Minister Nicola Sturgeon.

It comes as new research by Girlguiding reveals that two fifths (41 per cent) of girls (aged nine to 16) think there has been a rise in media sexism in the past six months, with more than a third (39 per cent) of these girls saying it has knocked their confidence.

Over the coming weeks, Girlguiding will share quotes from girls across Facebook and Twitter about how media sexism makes them feel about politics. It will call on people to share three calls to the media: to stop talking about politicians’ appearances and focus on their "opinions, not pins"; to include young women in debates and ensure their views are represented in political coverage; and to recognise the diversity of young women’s voices, including those who are too young to vote now but will still be affected by the decisions of the next government. Supporters are urged to use the hashtag #ForTheGirl to help get the message across.

Girls aged between 16 and 25 will feature in YouTube vlogs giving their views about politics in the UK and why their peers should care enough to use their votes and get involved. The charity has also set up a campaign page on its website to encourage girls to get involved. 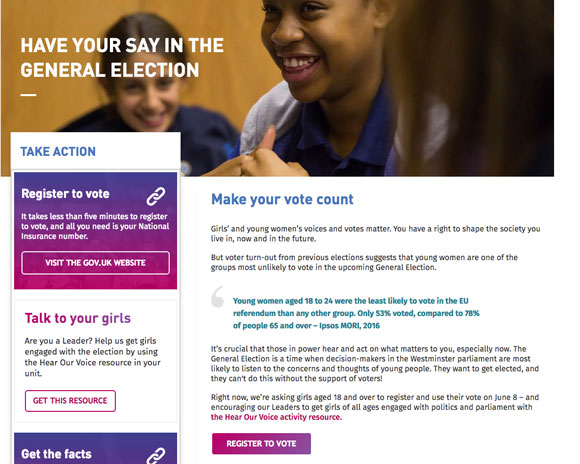 The campaign reinforces Girlguiding’s efforts to reduce the pressure girls can be put under to look perfect, and to highlight the impact that the "obsession with appearance" can have on young girls and women. The charity’s Girls’ Attitudes Survey 2016 said that almost a quarter of girls aged between seven and 10 (23 per cent) felt they needed to be perfect, and more than half (52 per cent) thought they were not good enough.