Third Sector talks to the charity's head of digital fundraising, Matt Jerwood, about the testing of its online campaign

Last November, Oxfam unveiled a data map that enabled donors to see where their funds were being spent. The Help Oxfam Deliver map showed many of the weekly aid distributions that were taking place around the world and was available to supporters who had donated to the charity through its website. Oxfam created the map in order to tighten the link between the charity and its supporters.

Oxfam said in November that the test website was a way for the charity to give supporters further involvement in its work beyond the act of donating.

Two months on and Third Sector caught up with Matt Jerwood, Oxfam’s head of digital fundraising, for an update on this online campaign.

What is the aim of the data map and has it been successful?

"The tests haven’t concluded, but so far the results seem positive. It seems that significantly more supporters are engaging with the data visualisation compared with our ‘control’ option which is a video. The map is about offering transparency to our supporters and it seems to be well received. At this stage we do not see the map as a promotional tool but rather a way to explain our work, develop relationships and increase understanding of what we do. If results are positive, we might utilise it in other ways, but for now the test is about meaningful thank-yous as part of the supporter journey, rather than about developing new support."

How does the map fit into the overall digital fundraising strategy?

"It’s part of a strategy strand centred on transparency and being sure supporters can see how their support is helping Oxfam to make a real difference in the world. Digital channels offer the most immediate, dynamic and accessible option for a supporter to engage with this type of content. It would be very difficult to deliver a dynamic map through any analogue means. It goes without saying that this works on mobile, which is essential for everything we do. We know that most emails are opened on mobile, making it fundamental that this works well for supporters opening a thank-you email on a mobile."

The data map is currently in trial mode. Will it be rolled out to the general public?

"With any new project the analysis is an essential part of decision-making. We need to reach a statistically significant set of results before we can draw any concrete conclusions. This is a trial that adds an evidential element to our thank-yous. If testing is positive, we’ll consider a wider roll-out. For now, however, the map isn’t openly promoted so that we get a truer set of results in a controlled way." 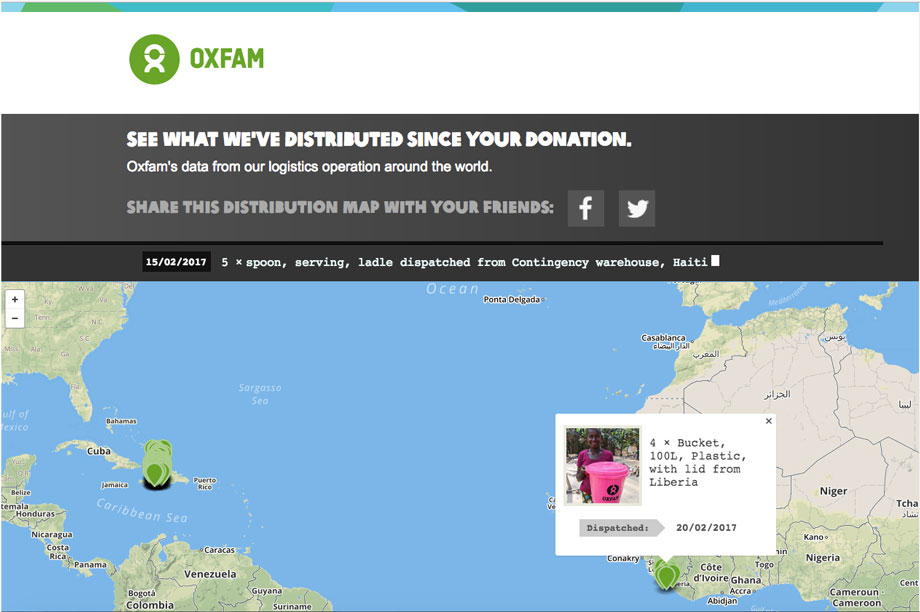 What logistics management system did Oxfam use? How difficult was it to create the tool?

"Oxfam has many logistics management tools, which monitor distributions from warehouses to country programmes and then to the end beneficiaries. The data is quite functional, so our main effort has been to translate it into a visually digestible format; something user friendly, understandable and rewarding. We hope to improve the supporter experience by exploring data visualisation."

As head of digital fundraising, what is your view of the data map now it has been running for two months?

"We can’t get too excited before the full insight has been gathered, but,so far I’m impressed by how supporters have responded to this form of data evidence after making donations. People seem genuinely to like it, and seem to feel closer to the impact of what they are supporting as a result. If this continues, we could expand the uses of this type of content. Data visualisation could engage new supporters."