Digital Campaign of the Week: Beatbullying

What is it?
More than three-quarters of a million people joined Beatbullying for The Big March, established to urge the government to help protect young victims of bullying, harassment and abuse. Members of the public were encouraged to sign a petition and create avatars of themselves on the Big March campaign website, which were then included in the online march. 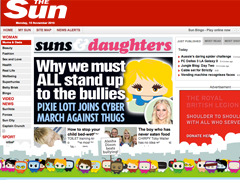 Throughout Monday 15 November, avatars of the marchers made their way across more than 60 partner websites, including those of MSN, MTV, AOL and the Office of the Children’s Commissioner. Many partners also pitched virtual ‘tents’ that housed information and support on The Big March’s website. Celebrities including pop stars Alesha Dixon, Pixie Lott and The Saturdays also pledged their support by taking part in the march. A YouTube video was also created to document what happened during the march.

What about the petition?
The petition calls for the government "to take immediate action to protect children and young people from bullying, violence and harassment of young people, by young people". Representatives from Beatbullying, including the family of a bullying victim, Tom  Mullaney, 15, who took his own life in May this year, delivered the petition to the Deputy Prime Minister Nick Clegg, on 17 November.

Anything else?
Beatbullying is also calling for an inter-departmental Big March Bullying Review to be established, and for new legislation to be introduced where appropriate, in the form of a School Safety Bill and a Cyber Bullying Act to protect children while they are at school or online.

Who was behind the campaign?

Beatbullying devised the campaign with support from the communications agencies Frank PR and Euro RSCG KLP.

The innovative campaign has secured acres of media coverage since the annoucement of its launch earlier this year. This is because it is new and different, moving the traditional 'protest march' idea online to embrace the power of the internet and social media, and demonstrates how effective using online methods can be for charities.