Digital Campaign of the Week: Calm

The male suicide charity is asking people to define what it means to be a man by adding words and definitions to an online "man dictionary". By doing this, Calm hopes to encourage men to eschew "harmful, boring and archaic" male stereotypes and describe themselves in their own terms, as well as raise awareness of its own work to support men in need.

How does it work?

Men are posting their definitions on Facebook and Twitter using the hashtag #mandictionary. These are then being gathered on a tagboard on the charity’s website. Some of the messages so far have included "Manicles (n.) The things in your head, or your life, that stop you from being you" and "Emancipate (v.): to free one's self of cultural conditioning & social stigma to seek help for mental illness".

Male suicide accounts for 77 per cent of all suicides in the UK, and 12 men take their own lives each day. This means that suicide is the single biggest cause of death in men aged between 20 and 49 in England and Wales, and Calm wants to draw attention to these statistics. The charity says there is a cultural barrier preventing men from seeking help, and it wants to encourage communication because it believes this can help to keep them alive.

The charity is turning the best definitions into images, such as the one below. Posters about the campaign are being put up across the country, and the finished dictionary might also be published in a more permanent form, which is yet to be decided. 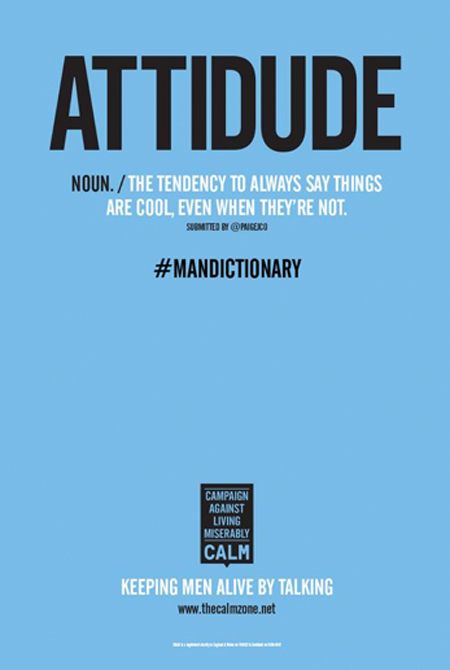 Rachel Clare, assistant director of Calm, says: "At Calm we work hard on breaking down the barriers to men seeking support when they hit a crisis, and to challenge a culture that equates asking for help with weakness or loss of masculinity.

"We hope that this campaign will not only engage a new audience and raise awareness, but also encourage healthy debate across the country about what it means to be a man in society today, and get men talking about the issues that matter to them."

By asking people to make up their own dictionary entries, Calm has found a fun, unique way to get people talking about a serious issue. The definition of masculinity has been a hot topic in the media recently, so the campaign does well to connect with this. Turning the best entries into images is also clever, because it gives people a reason to take part and makes the results more likely to be shared.