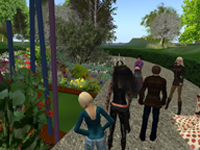 What happened this week?

Members of the public were invited to take part in an event at the garden on Second Life earlier this week, where they could look around the flower displays.

The garden’s real-life photographer, Robert Davidson, who has experience of homelessness, took part in the two-hour event at the virtual garden. Davidson’s avatar was interviewed by Homeless Link chief executive Jenny Edwards’ avatar in front of an international audience.

After the interview, a tour of the garden was led by Edwards’ avatar. Siri Vita, the creator of the in-world garden, was also present to talk about the process of its creation, while Junivers Stockholm streamed music, including some he composed for the garden and some tracks from Streetwise Opera’s CD There’s a Place for Us.

Why create the garden in Second Life?

Homeless Link’s Edwards said of the campaign: "The idea behind the Garden for Change was to build on the positive impact of the real garden. We want to break down the stereotypes of homeless people by demonstrating to the general public and business internationally that homeless people have talents and potential and should not be written off by society."

She added: "We want to promote the project to homelessness organisations internationally in order to share the learning and good practice. Second Life offers an alternative way to host debates and discussions with people from across the world." 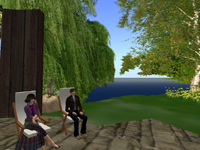