Keep Scotland Beautiful has taken to Twitter to promote its annual campaign for the first time, which takes place next Spring. The two-month campaign, called National Spring Clean, aims to encourage people in Scotland to get together and help pick up litter from their neighbourhood.

How can people get involved?

The charity is hoping to get 100,000 volunteers signed up to help with next year’s campaign, which will run from 14 March until 14 May 2011. A dedicated microsite has been set up where people can register to take part and which features tools that those wanting to participate can use, including posters and a map of events happening in their area.

How has Keep Scotland Beautiful been promoting the campaign? 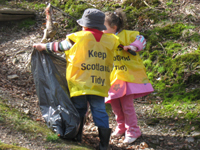 The charity has been using its Twitter feed to make people aware of the campaign. Followers of the feed have been asked to upload pictures of any rubbish they have already picked up. Facts and figures about how successful the initiative has been in previous years have been tweeted. The organisation has also used its Facebook account to promote the campaign.

The television presenter Kirsty Allsop retweeted messages sent out by Keep Scotland Beautiful and encouraged her followers to follow the charity’s Twitter feed.

What else is planned?

Activity so far has been limited to online, but a press campaign will launch in the New Year.

Taking to Twitter several months before the campaign launches will create more buzz around the activity and consequently raise awareness of what they are trying to do. While asking Twitter followers to post their pictures online will make it more interactive.