For its Barefoot Friday campaign, the poverty relief charity asked people to post pictures of their feet on social media and donate money to buy shoes for children in Africa

On Barefoot Friday on 20 June, Street Child Africa asked people to post footsies (pictures of their bare feet) on social media and make donations to help buy shoes for children living in poverty in Africa. 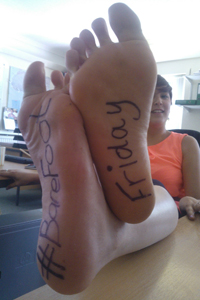 The charity says that being barefoot is one of the main signs a child is living on the street, opening them up to abuse and exploitation and denying them access to education and healthcare. According to Street Child Africa, the suggested donation of £3 is enough to buy a child a pair of shoes and therefore give them a better chance of moving away from homelessness.

"We wanted to raise the profile of Street Child Africa with new audiences in a way that is current, dynamic and fast moving," says Sheila Lutchanah, director of fundraising at the charity. She says the charity does not have the budget to attract new donors or raise its profile through traditional methods, so the low cost of the campaign was attractive.

How has it performed so far?

A total of 110 footsie pictures were posted on Facebook, although the charity believes it was unable to view many more because of privacy settings. The best-performing Barefoot Friday post received 1,213 likes and 321 shares, and the audience of the Street Child Africa page increased by 90 per cent on the day of the campaign.

On Twitter, 103 #footsie pictures were posted, leading to 149 retweets. Street Child Africa also received tweets from Love It magazine, The Independent, The Guardian, London Live and more. The number of visitors to the charity's website was six times greater than normal on the day of the campaign.

This might seem like just the latest in a long line of selfie campaigns in the wake of the unexpectedly successful nomakeupselfie phenomenon, which directed funds to Cancer Research UK – and since they cost charities virtually nothing to create, who can blame them for jumping on the bandwagon? However, unlike other copycat campaigns, Barefoot Friday has an obvious link between the image the donor takes and the cause that they are helping, which makes its message more powerful.

Drawing attention to one small aspect of the much bigger issue of poverty in Africa and offering people the chance to do something about it by buying a pair of shoes is also a clever strategy. This way, donors will feel that their money has made a tangible difference, rather than just adding a few extra pounds to the funding pot.