Plus: Five shortlisted for Social Entrepreneur of the Year; and the app that allows diners to donate

Facebook caused some panic among publishers this week when a version of its news feed called "Explore" moved non-promoted articles out of users’ news feeds.

The new system, which is being tested in six countries including Sri Lanka, Serbia and Slovakia, resulted in nearly all non-promoted (in other words, not paid-for) posts being moved over to the Explore feed, with a number of publishers subsequently reporting large falls in user engagement as Facebook users were left mostly with material from friends and adverts.

In a blog on Medium, a journalist at the Slovakian newspaper Denník N, Filipe Struharik, said the result was that "pages are seeing dramatic drops in organic reach".

To counter concerns that organisations would ultimately have to pay to distribute their content on Facebook, the social media giant responded in a blog from its head of news feed, Adam Mosseri, who said that there were no "current plans to roll this test out further".

"The goal of this test is to understand if people prefer to have separate places for personal and public content," Mosseri wrote. "We will hear what people say about the experience to understand if it’s an idea worth pursuing any further.

"There is no current plan to roll this out beyond these test countries or to charge pages on Facebook to pay for all their distribution in News Feed or Explore. Unfortunately, some have mistakenly made that interpretation, but that was not our intention."

Publishers and other organisations, including those from the voluntary sector that have developed social media strategies, might wish to monitor further developments.

Five entrepreneurs have been shortlisted as finalists for the Social Entrepreneur of the Year Award 2017.

The five have been selected from the 200 that applied to the Lloyds Bank Social Enterprise Scale Up programme, run in partnership with the School for Social Entrepreneurs and jointly funded by Big Lottery Fund. The field was first narrowed down to 40, and the finalists have been chosen based on the impact they have created, the growth they have achieved and the potential of their plans.

The five finalists in with a chance of the £10,000 first prize are Katie Buckingham of Altruist Enterprises, Cemal Ezel from Change Please, Nikki Markham of Battling On, Rachel Roger of Reform Radio and Maggie Sikora from Mapis. Voting is open to the public until 31 October. 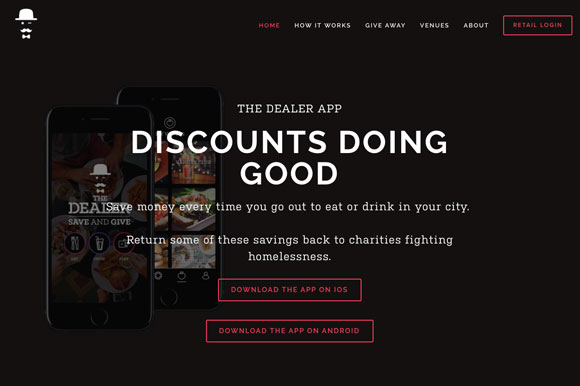 A smartphone app that offers discounts at UK restaurants in exchange for donations to homeless charities has extended its reach after a trial.

The Dealer App launched the pilot scheme in February in Oxford and has now extended it to major cities, including Liverpool and Manchester, as well as Swansea and Cambridge. As part of the promotion, restaurants will offer up to 50 per cent off deals until 1 November. More than 250 outlets have joined the scheme.

Each customer chooses a deal and, on arrival at the venue, get the staff to enter a unique pin code. The app then gives the diners the opportunity of using some of the money saved to donate to local homelessness charities such as Mustard Tree (Manchester), the Whitechapel Centre (Liverpool), Shelter Cymru (Swansea) Jimmy’s and Wintercomfort (both Cambridge).