The charity turns to social media - and Unilad - to expose everyday sexism, plus a new app for Dry January and Stagetext launches Captioning Awareness Week

Girlguiding has used negative commentary from media personalities to highlight the everyday sexism that women still suffer in a new video designed to challenge outdated perceptions and to encourage people to see the charity in a more modern light.

#ForTheGirl has been launched in the light of research by the charity that found 70 per cent of 11 to 21-year-old girls believe sexism is so widespread it affects most areas of their lives. The film and campaign directly target women aged 25 to 34, both as role models for the charity’s young members and as a key demographic for future volunteers and parents of girls who might join the charity. The campaign will be aired through a number of channels, including Unilad's Facebook page.

"#ForTheGirl highlights the level of sexism and inequality girls face in their day-to-day lives and through the mainstream media, and reminds them that they don’t have to accept it," said Becky Hewitt, communications director at Girlguiding.

"We are calling on everyone to join girls in challenging sexism whenever and wherever they see it to build a fair future for girls everywhere."

There are a number of months in the year now when charities are encouraging us to give up the booze, it seems, but if you're looking for the annual post-festive drought, Alcohol Concern has an app for that.

Launched this week, the Dry January and Beyond app is designed to help abstainers get through the 31 days of tea drinking (other non-alcoholic beverages are available).

Users can record and review their daily activities using the progress calendar, receive personalised motivational messages, keep track of money and calories saved and choose to receive articles, news, advice and event updates through the app.

Emily Robinson, director of campaigns at Alcohol Concern, said: "After piloting our app during the 2016 campaign, we know technology can be a positive asset in tracking what you’re drinking and getting in control."

Alcohol Concern has also announced a link-up with Virgin Money Giving that will enable supporters to raise funds for their chosen charity on a 50:50 split. 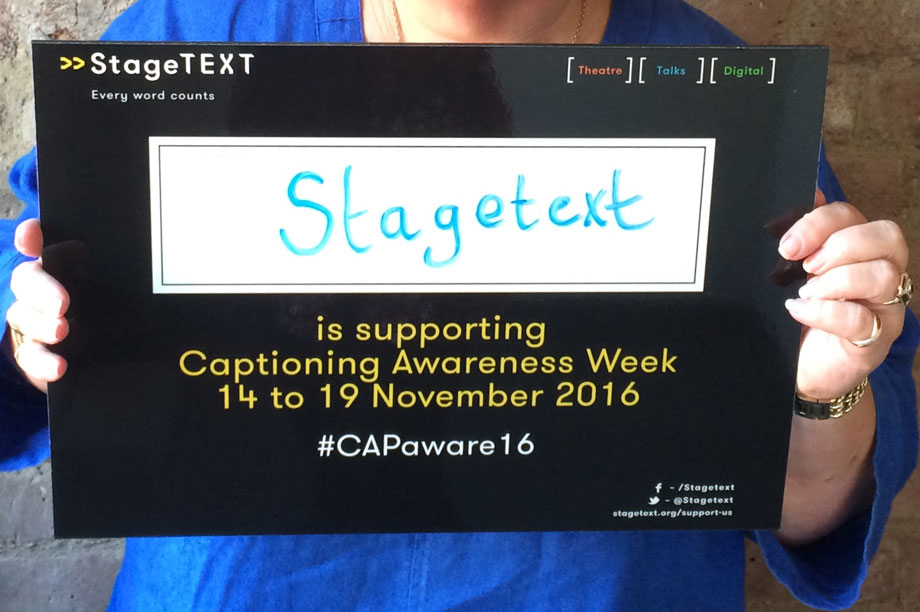 Stagetext is hoping that a quick and simple social media messaging service will give a boost to its Caption Awareness Week this month.

The charity, which provides captioning and live subtitling in theatres and cultural venues, is encouraging arts venues and caption users to pledge their support by "putting their name in the frame" – they do this by downloading a special Captioning Awareness Week frame from the charity's website, write their own name or their organisation’s in it, take a selfie of them holding it and share it on Twitter and Facebook using the hashtag #CAPaware16.

In a ComRes poll run in May, Stagetext found that familiarity with services to make arts and culture more accessible, such as captioning, was low among adults in the UK and, although 25,000 people benefited from a captioned or live subtitled event last year, millions could be missing out.