Our changing times continue to have a major impact on how, where and why we give, as Enthuse’s latest research reveals. From who’s donating most widely to the need for ‘flexible fundraising’, read on for the key trends.

The past year has been full of uncertainty for everyone – not least charities. Even the positive buzz around the vaccine rollout has been tempered by concerns about new Covid variants. So what impact is all this having on charity supporters?

The latest Enthuse Donor Pulse report explores donor behaviour and attitudes over both the past quarter, and the year as a whole. Here, we look at three top takeaways: the sustained boost to charity support triggered by the pandemic, the continuing rise in digital donations, and what flexible working patterns mean for workplace fundraising.

Levelled-up giving, led by the young

Given the challenges the general public has faced over the past year, you might think that charity would be far from their minds. Yet after some initial trepidation, donors have continued to give with conviction. At the outset of the pandemic, 59% of the public had recently donated, but this levelled up three months later to just under seven out of 10 people – and has stayed at a steady 69% since October 2020.

The real driving force of this generosity was younger people: 81% of under 40s have donated in the last quarter, compared to 62% of over 40s. Under 40s were also more likely than older generations to spread their giving around multiple charities. Nearly half (48%) of 18-24 year olds have donated to three or more causes over the past three months, as have 40% of 25-39 year olds. But only 28% of 40-54 year olds and 22% of 55-64 year olds have done likewise.

Meanwhile, the public’s intention to donate has risen steadily over the last year: 71% intend to give within the next three months, a rise of 7% since June 2020. Again, it is the younger age groups who feel most strongly about this, with 81% of Gen Z (18-24 year olds) and 78% of millennials (25-39 year olds) planning to donate.

The findings underline how important it is for charities to target younger supporters and donors when planning campaigns. Appealing to ‘Generation Generous’ will be critical to any long-term plans to build back better. Active givers should also be a key target audience: 88% of those who had donated in the past three months intended to give again, compared to only 27% of those who hadn’t.

The rise of digital donations (and ‘give and forget’)

With the easing of pandemic restrictions, we might expect to see a move away from online donations and a return to more traditional cash handouts. In fact, digital giving has increased over the past three months to reach the highest figure seen all year: 44% of the public have donated online (up 7% since June 2020).

Gen Z and the millennials were most likely to have donated online (62% and 64% respectively). But digital giving was also on the increase among their elders this quarter, rising from 34% to 38% of 40-54 year olds, and from 22% to 29% of 55-64 year olds. The continued rise of online donations, even as people get out and about more, emphasises the need for charities to make digital giving as easy as possible.

Give-and-forget donating – where people don’t remember the causes they have supported, typically because they’re donating through consumer giving platforms with limited charity branding – is also on the rise. The last quarter saw a rise in donations through such platforms, and a corresponding 3% increase in the number of people who couldn’t even recall which charity they’d given to.

Tellingly, over three quarters (78%) of people who had donated via a charity’s own website could remember the name of the charity, but this drops to 63% among those who’d used a consumer giving platform. Clearly, charities who offer fundraising opportunities on their own sites stand a better chance of nurturing long-term supporter relationships.

Alongside the absence of live fundraising events in the pandemic, another blow to charities has been the loss of fundraising activities in the workplace. With 58% of people having been displaced from their normal place of work by home-working or furlough, this important source of income has inevitably suffered.

While many people are now returning to the physical workplace as restrictions lift, a third remain unsure if, and when, they’ll be back. Half expect to spend three days a week or fewer in the office, going forward – and one in 12 won’t be returning to their previous place of work at all.

These are major considerations for any charity thinking about how to reboot workplace fundraising. With fewer people in the physical office, time-sensitive campaigns and events such as awareness days will be harder to coordinate, as will cash donations.

But there are also lessons to be learned, and inspiration taken, from the morale-boosting activities we’ve seen over the past year, such as virtual pub quizzes and fitness events. Companies with a mix of office-based and remote workers will still want to offer inclusive cultural activities for both. Charities that offer ‘flexible fundraising’ with virtual as well as in-person options, and put digital giving at the heart of their plans, will be better placed to thrive in the new world of work. 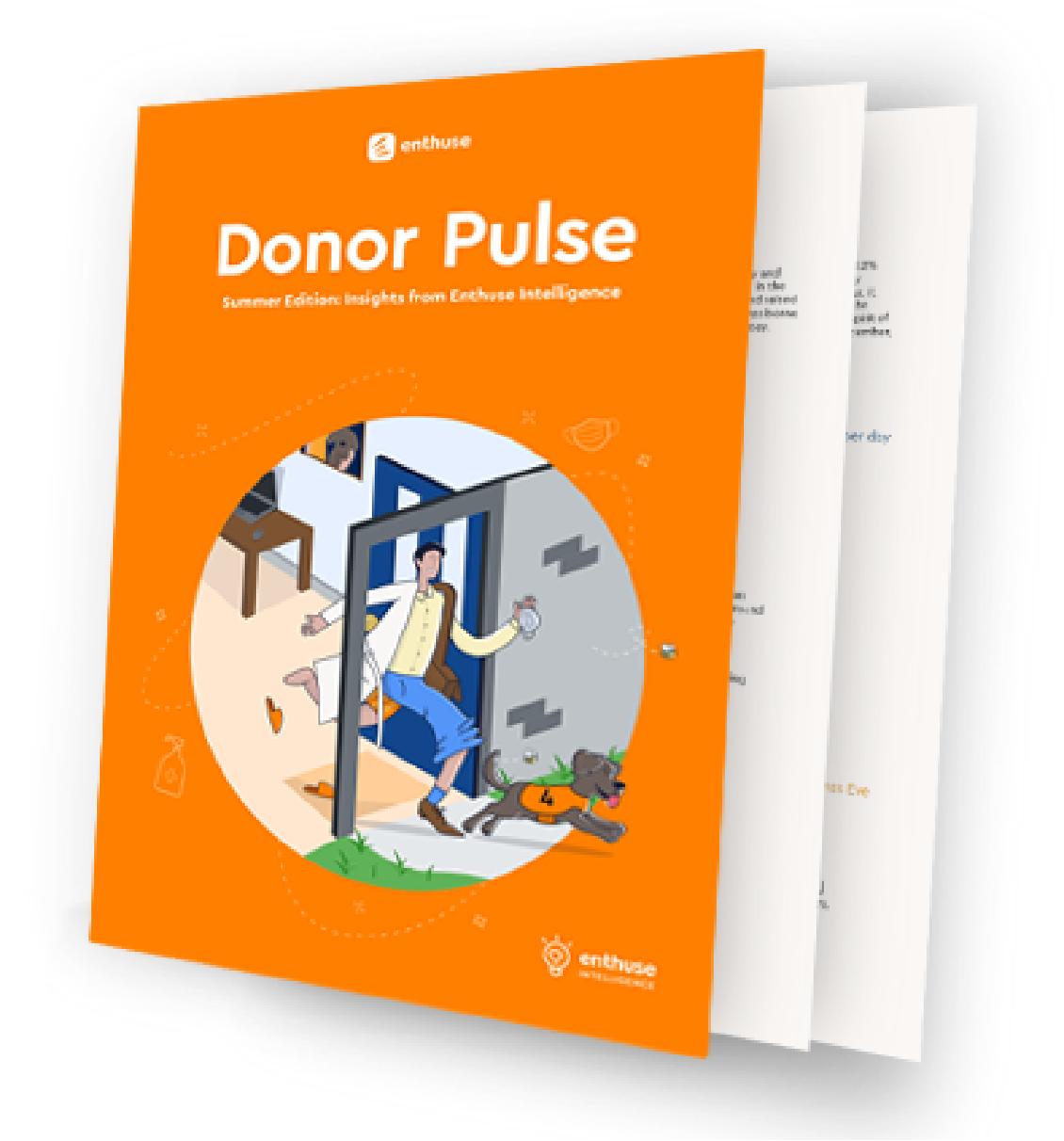 Enthuse is a fundraising, donations and events registrationplatform that has helped more than 4,000 charities – including one in three of the top 100 – raise over £100 million between them.

Enthuse’s solutions are customised with a cause’s own brand, and put the organisation in control of their data. This allows charities to build and nurture a loyal supporter base, raise more funds and increase their impact.

Click here to download the full report, or for more information, email info@enthuse.com or go to enthuse.com